Note: A thread for this campaign has been created in the AAVSO Campaigns and Observation Reports discussion forum:  https://www.aavso.org/rw-aur-monitoring

This campaign has been extended at least through 2022. Please continue to monitor RW Aur until further notice.  -  Elizabeth O. Waagen, 17 April 2020

"RW Aur A is a classical T Tauri surrounded by an accretion disk. It's a visual binary; the B component is fainter and shows no sign of a disk. The separation is 1.4 arcsec, but the B component is so much fainter (V = 13.6) that it's not a problem if the binary is not resolved.

"In fall 2014 (we don't know the exact date) RW Aur A become dimmer by about 3 mag in V band. This can be seen e.g. in the AAVSO database [use www.aavso.org/lcg or see below]. The current best idea of what causes this dimming is that the secondary component RW Aur B has passed by the disk of RW Aur A and pulled mass out of the disk into a stream or cloud that now covers up part of the light from RW Aur A. The orbit of the binary is > 100 years, so we don't expect this to happen again any time soon!

"We want to use this opportunity to measure what this stream is composed of. What is the ratio of gas and dust? What is the size of the dust grains?

"The way we attempt to do this is to observe RW Aur A in as many different bands as possible...The Chandra X-ray satellite will observe RW Aur A for 11 hours. The satellite operations team is currently working on the schedule, so we don't know exactly when these observations are going to happen, but we expect that they will likely take place sometime during April 6-12, although possibly sooner. X-rays are absorbed by all material between the star and us - the gas and the dust.

"In contrast, optical reddening is only due to the dust around the star. If we compare the two, we can calculate how much of the mass in the tidal stream is gas and how much is dust.

"Thus, we ask [AAVSO observers] to observe RW Aur in the next few weeks (as long as it is still visible) in as many bands as possible...It would be great to have a dense lightcurve (at least one point per night in as many bands as possible (incl. JHK if possible)) for the next few weeks. We expect it to be stable, but if anything funny (flares, further dimming) happens then we need to know about it, so we can see how that would affect the X-ray observations." 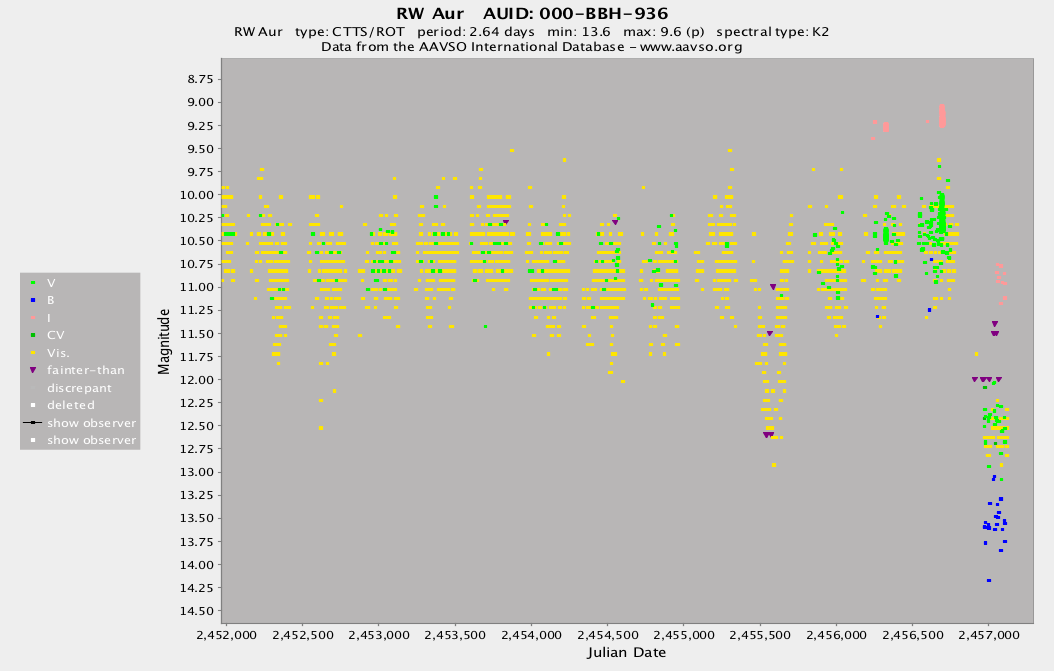 Please observe RW Aur nightly in as many bands as possible through the end of the current observing season. Visual observations are welcome.

Please use WebObs to report your observations to the AAVSO International Database using the name RW AUR.

Thank you for your observing efforts and valuable observations!

This AAVSO Alert Notice was prepared by Elizabeth O. Waagen.

An Alert Notice archive is available at the following URL:
http://www.aavso.org/alert-notice-archive

Subscribing and Unsubscribing may be done at the following URL:
http://www.aavso.org/observation-notification#alertnotices