Alert Notice 761: Monitoring b Per eclipse in December 2021

Dr. Donald F. Collins (AAVSO member), Dr. Robert Zavala (US Naval Observatory, Flagstaff Station), Jason Sanborn (Lowell Observatory), and Dr. Anatoly Miroshnichenko (University N. Carolina, Greensboro) have requested high time-resolved observations of the bright star b Persei during the upcoming predicted primary eclipse of the AB inner pair. The mid-eclipse prediction is centered on December 23.4 ± .5 UT. The observation window should last about 2 weeks: December 16, 2021, to December 30, 2021. It is important that observers observe several long time-series observations both before and after the eclipse as well as all parts of the eclipse.

The b Persei system (HD 26961, HIP 20070, HR 1324, SAO 24531) consists of three stars in a hierarchical system. The A and B components are close-orbiting (1.5237 d period) in a low-inclined orbit that exhibits ellipsoidal variation: ~0.06 peak-to-peak magnitude variation centered on magnitude 4.6 with no eclipses (Stebbins 1923). The brightest star of the pair is spectral class A2V. Radial velocity studies (Hill et al. 1976) determined the existence of the third star that orbits the AB pair with a period of about 702 days in a highly eccentric orbit. AAVSO observers detected the first ever eclipse/transit involving the third star of the system in January-February 2013 campaign (AAVSO Alert Notice 476). (See AAVSO Alert Notice 610 for the light curve of the first campaign).

Since the detection of the first eclipse of b Persei in 2013, 7 AAVSO campaigns have observed time-resolved eclipses (AAVSO Alert Notices: 507 (Jan 2015), 537 (Feb 2016), 563 (Dec 2016), 610 (Jan 2018), 655 (Oct 2018), 688 (Dec 2019), and 721 (Oct 2020)). The results of these campaigns are displayed in Figure 1 (secondary eclipses) and Figure 2 (primary eclipses). A secondary eclipse consists of the third star transiting behind the rapid orbiting inner AB pair that do not eclipse each other. A primary eclipse consists of the third star C transiting on the Earth side of the rotating AB pair and blocking some of the light from the inner stars. The deepest eclipses occur when the third star is totally ingressed in the brightest A type star of the inner pair.

The previous campaigns by AAVSO observers have revealed the following:

1. Both the primary and secondary transits show significant light curve dips in total observed brightness on the order of 0.1 mag to 0.4 mag.

2. The orbital period for the C star is 704.5 ± 0.5 d based on the time difference between successive transits of the same primary/secondary phase of the C orbit. The previously published orbital period is 702 d (Hill 1976). Our estimate of the C period has changed since the Oct. 2020 Alert Notice as more transits have been observed.

3. Radial velocity observations by Anatoly Miroshnichenko, which separate the short period RV oscillations from the long period RV oscillation, have indicated that the four events shown in Figure 1 were secondary eclipses in which the C star transits behind the A-B pair. We have also observed three primary eclipses: March 2016, February 2018, and January 2020 (Figure 2). In the primary eclipses the C star temporarily blocks some of the light from the close-orbiting A-B pair. Figure 2 also indicates a prediction of the light curve for the December 2021 primary eclipse.

Work has been started on a multi-parameter modeling to enable fitting to many of the star's attributes as well as the dates using all events. Promising results in terms of algorithm speed (Lagarias et. al. 1998) have been achieved with individual events.

Observers are asked to obtain high-resolution time-series observations (CCD, DSLR, or PEP) of long duration in V during the eclipses as well as as many as possible out-of-eclipse time-series observations of the system during the two week window centered on the December 2021 eclipse (December 16- December 31). Out-of-eclipse data are needed to calibrate the various offsets expected from different observing systems.

Guidelines for observing bright stars for both CCD and DSLR cameras may be found in the Alert Notices for the earlier campaigns. DSLR guidelines may also found in the AAVSO DSLR Observing Manual. Another resource for DSLR photometry may be found by Buchheim (2018, used with Robert Buchheim’s permission). Bright star photometry has a number of problems since the brightness of well-focused images have to be short. Better results are observed by 1) making many exposures at any given time and stacking the images; 2) For short focal-length optics, de-focusing may be necessary to prevent under-sampling by a CCD detector. Try to keep defocusing low enough that star profiles show a clear central peak with a FWHM about 8 1x1 binned pixels or at least 4 2x2 binned pixels. Continuous observations may be conducted throughout the night or bursts of at least 10-20 observations every 30-60 minutes. Please try to follow the same protocol while observing before, during, and after the eclipse.

Spectroscopy will also be extremely valuable, especially during this primary eclipse in which the C star will block some of the light from the A and B stars at different times throughout the eclipse. We hope to see small changes in some parts of the spectra if the A or B stars are totally or partially eclipsed. It will be especially valuable if spectra obtained an eclipse of the A star that will reveal any rotational RV shifts of the A star.

Please send any spectroscopy observations to Dr. Anatoly Miroshnichenko <a_mirosh@uncg.edu>. All spectroscopy data should be displayed with the following guidelines:

The FITS header should include: coordinates of the observing place, the observer name, RA & DEC of the star, UT time of the observation (better mid-point), exposure time in seconds. The intensities need to be in ADU (not normalized to the continuum) and wavelength scale needs to be geocentric.

If the standard cannot be met, Dr. Miroshnichenko would need specific explanations of the data-taking circumstances.

Buchheim, R. K. 2018, “Lessons from DSLR Photometry of b Per “Third Star” Eclipse (February 2018)”, SAS-2018 The Symposium on Telescope Science and ALPO Annual 2018 Meeting, Proceedings for the 37th Annual Conference of the Society for Astronomical Sciences [http://www.socastrosci.org/Publications.html] pp 71-77.

[Note: Bob Buchheim has given AAVSO permission to make available a stand-alone copy of his presentation on the AAVSO web site for observers' easy access – dfc] 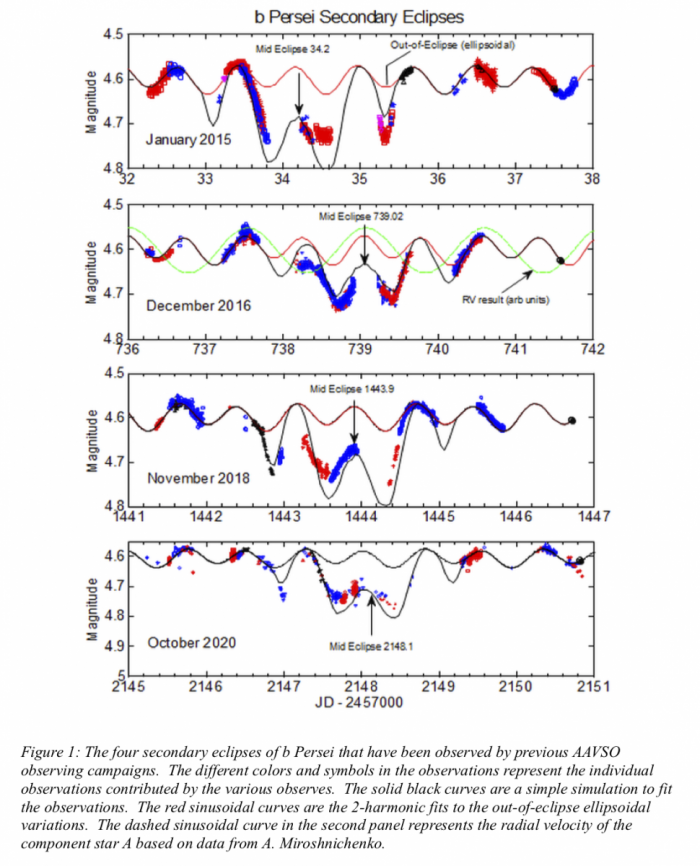 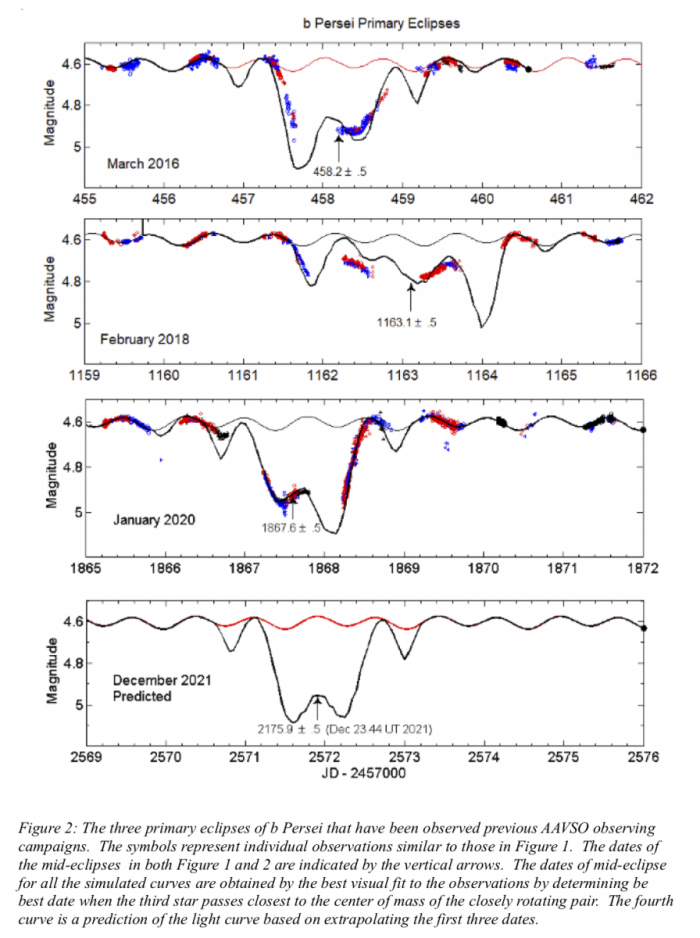