Please subscribe to these threads if you are participating in the campaign so you can be updated by the astronomer and by HQ. Join in the discussion or ask questions there!

The recurrent nova U Sco is undergoing an eruption. The eruption was discovered by Masayuki Moriyama (Sasebo, Nagasaki, Japan), who observed U Sco at <17.3 C on June 6.56664 UT and then at 11.4 C on June 6.72030. Confirmation was reported by numerous observers from several countries within a very short time.

U Sco continued to brighten rapidly and reached a maximum magnitude  of  ~7.8 V on June 7.1 UT (average of numerous observations). As of June 7.92 UT it is visual magnitude ~9.0.

For a light curve of the over 420 multicolor observations submitted to the AAVSO International Database by 34 observers worldwide since the outburst began, please go to our Light Curve Generator (https://www.aavso.org/LCGv2/) and enter U Sco and the starting date of 2022/05/27, which will show observations prior to the outburst as well as the outburst. For a listing of observations, use our Data Download tool (https://www.aavso.org/data-download/) and give the same starting date and use the current date (format MM/DD/YYYY) as the end date.

As the eruption proceeds, there will be many requests for optical and spectroscopic coverage in support of multiwavelength observations of U Sco being made with numerous space- and ground-based instruments. We may be announcing some of them in future AAVSO Alert Notices.

“Coverage is requested beginning immediately and continuing through to the end of the eruption expected around 11 August.  All magnitude estimates are useful, but the most useful are long time series in any single filter (or filterless).

Prof. Schaefer writes: “The eruption that peaked today (June 7.1 UT) came as a surprise because of the short time interval since the previous eruption.  The discovery was by Masayuki Moriyama in Japan, who caught the very fast rise well before the peak.  U Sco is a very fast nova, fading by 3 magnitudes from peak in the first 2-3 days, and returning to normal quiescence by 65 days after peak (around 11 August).  Soon, U Sco will be so faint that only CCD magnitude measures can give the light curve with adequate accuracy to see the critical and mysterious fine structure.  Towards the end of the event, U Sco will be magnitude 16-18, with eclipses going even to 19 mag.

“The 2010 eruption of U Sco had a magnificent light curve measured by amateurs worldwide.  This light curve had an average of one magnitude every 140 seconds fairly uniformly throughout the entire 65 days of the eruption.  See the smoothed plot below.  Such an awesome data set is impossible for professional facilities.  This light curve was the first time that any nova had any substantial amount of time series photometry, and two new phenomena were discovered.  The first discovered phenomenon was a series of randomly placed hours-long flares, with amplitudes ~half-magnitude, only in days 6-14 after the peak.  Nothing like this has ever been seen before or after, so your new time series from 13-21 June are needed to get good views.  These flares are mysterious, with no known or proposed mechanism.  The second new phenomenon was a series of light curve dips, with typical amplitudes of half-a-magnitude and durations of ~4 hours.  These were seen only late in the tail of the eruption, correspondingly after 18 July in the 2022 event, with the end date not determined.  These aperiodic events are reminiscent of U Sco's deep eclipses, so the best idea is that these are a unique case where the re-formation of the accretion disk makes for chaotic and dynamic bumps on the edge of the disk that then shadows one-time eclipses of the central source. 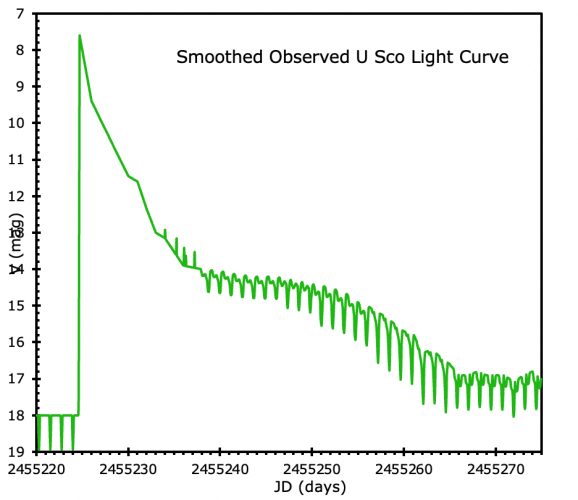 Finder charts with comparison stars for U Sco may be created using the AAVSO Variable Star Plotter (VSP).

Please submit your observations to the AAVSO International Database using the name U SCO.

SUBMIT OBSERVATIONS TO THE AAVSO

Please support the AAVSO and its mission -- Join or donate today:
https://www.aavso.org/join-aavso