Please subscribe to this thread if you are observing this star so you can be updated. Join in the discussion or ask questions there!

The bright semiregular variable RW Cep is undergoing an episode of apparent dimming, and observations of all types are requested.

Visual observers need to be aware of the redness of RW Cep and make observations using the quick-glance method, rather than looking at the variable for prolonged periods.

It is important to note that in 2002, the overall brightness of the star increased by about half a magnitude. In 2021, it returned to its previous approximate level of brightness. The current event appears to be a combination of that shift and the type of minimum occasionally seen in the past.

The accompanying light curves of RW Cep are from the AAVSO International Database and show the complete dataset. The scatter among the visual observations is due substantially to the redness of the variable; different choices of comparison stars used by different organizations also contribute to the scatter. Despite the scatter, the overall behavior of the star is evident. The complete light curve may be inspected using the AAVSO Light Curve Generator (https://www.aavso.org/LCGv2/) and using the name RW Cep, leaving the From and To dates blank, and choosing All Bands.

Spectroscopy recommendations provided by AAVSO Spectroscopy Section contact Lauren Herrington include: "Use whatever equipment is available. However, likely to be most valuable would be low to medium resolution (R=100 to R=1000) with full spectral coverage, to capture the slope of the continuum. Since the continuum is being measured, it's important to apply instrument response correction (non-corrected spectra are still useful, but less so).

"Full spectral coverage here means full coverage of the visible region, 4000-7000; coverage of the IR would be a nice bonus, too. The exact wavelengths don't matter too much, since researchers will probably be wanting to look at the TiO bands, which cover the entire spectrum.

"For SNR, higher is better, of course; an observer should probably target SNR>50 for a useful spectrum. As far as cadence goes, 1 spectrum per week would be good."

ATel #15800 (Vollmann and Sigismondi) also reports on the dimming of RW Cep. 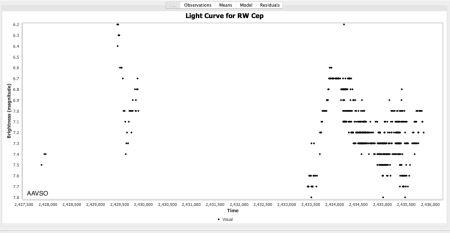 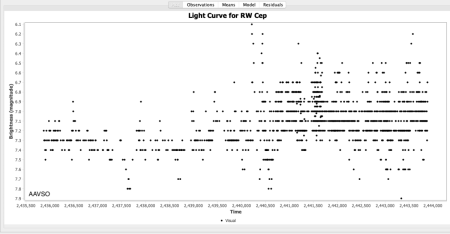 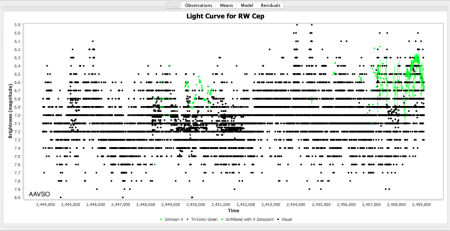 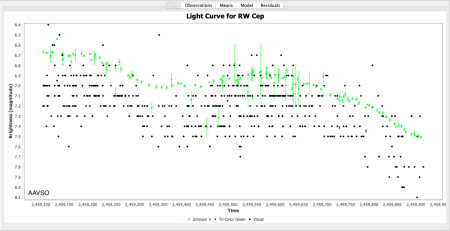 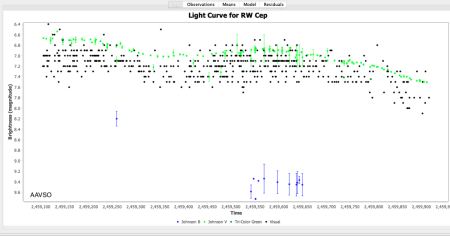 This Alert Notice was compiled by Elizabeth O. Waagen.

Please support the AAVSO and its mission -- Join or donate today:
https://www.aavso.org/join-aavso