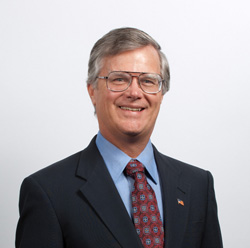 I have been an amateur astronomer since childhood (my first telescope was 2.5 inch Sears refractor).  In the late ‘80’s I was introduced to CCD photometry, which dramatically changed my emphasis from visual deep-sky observing, to photometry of asteroids and variable stars (and a recent addition: spectroscopy).

I have been an AAVSO member for about a decade.  I’ve submitted photometric measurements of pulsating and eclipsing variable stars, EB timing measurements, and I’ve participated in a few special campaigns (e.g. the M-31 “Hubble variable” campaign” and the recent “b Per” eclipse campaign).  I was part of the team that prepared the first-draft of the DSLR observing manual.

As a Board member of the Society for Astronomical Sciences, I have helped to facilitate several joint meetings of SAS and AAVSO, which I think were successful events for both organizations.

I’ve been a successful Business and Program Manager (for an aerospace company), an enthusiastic amateur astronomer, and a leader in several non-profit organizations.