I hope you've all read the January 2016 AAVSO newsletter and seen my challenge - how many of you are interested in completing the Astronomical League's Binocular Variable Star Observing Program by the May AAVSO meeting in St. Louis? Here is my challenge (read the President's column): https://www.aavso.org/sites/default/files/newsletter/newsletter67-low.pdf . As promised, here is a special forum topic where we can talk about our strategy, our favorite binocular stars, and anything else related to this challenge. Let's get to it!

I received mine in November. The pin is really nice. It will look good next to my variable star observing program pin on my AAVSO name badge. See you in May.

Note the number on my certificate (#1). The actual pin is on top of the certificate in the upper left corner for scale. 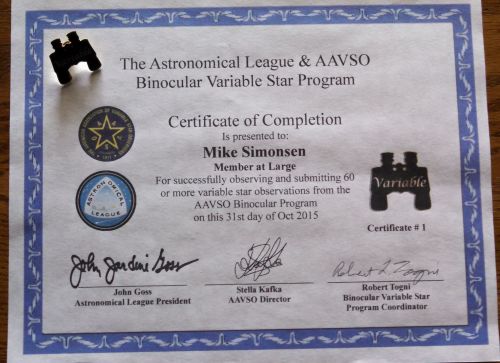 I'm in.  It will be a nice incentive while I am seriously trying to improve my new DSLR skills.

LKR
Affiliation
American Association of Variable Star Observers (AAVSO)
Wed, 02/24/2016 - 18:36
So where are you all starting from?

If you look back on your past observations, you may find some binocular observations already uploaded to the AAVSO database! So far I have 17 binocular observations of 14 different stars in the official AAVSO binocular program (which is what the AL program is based on). I have downloaded finder charts for some new seasonal stars and am looking forward to the next clear night I have available!

Also don't forget to do some unaided eye observations as well for the database. For example, while doing rho Cas, why not check out Gamma Cas as well! The same with naked eye Epsilon Aurigae when you look at binocular star psi 1 Aur.

Is there a way to check how many of these Binocular Program stars I already observed?

The way I did it was to look at the list of stars on the Binocular program website (there is a nice spreadsheet to download) and cross reference with the list of my submitted observations in the AAVSO database.

If someone has an easier way to do this, please let everyone know!

Remember that you can't reuse observations you used to get the original AL Variable Star program pin, but new observations are fair game.  I least that's the way I understand the rules.

I am ashamed to say I don't have my AL variable star pin.... yet :) . That will be another challenge.

But this is good advice to anyone who already has that pin.

Kristine's challenge sounds like a great way to get observing as soon as the clear season returns, so I joined the challenge as well, and it ought to be reasonably practical to meet the challenge requirements during the next couple of months (beginning this evening) but I doubt that I can get close to 2000 binocular observations (like Bruno's list) by May!

Note to self - it really isn't spring yet! Next time dress more warmly.

I have my minimum number of distinct stars now, I just need to rack up more total binocular observations.

So far I've got 10 stars with 14 observations.  Hope to finish before the year is up!

WIll try to get Z Uma and ST Uma if the clouds cooperate tonight although Z Uma is just at the limit for my 10x50s and poor skies.

As they say, Just Do It!

Every observation is important.

Thanks for joining Team Binocular!

Still poking along with 14 vars and 24 obsvs.  With my skies and talent each variable is a project!  Now working on Tu Cvn.  Interesting region with Y Cvn in the field.

stellakafka
Affiliation
American Association of Variable Star Observers (AAVSO)
Mon, 04/04/2016 - 22:45
How many in a month?

Really hard to observe anything from our overcast Cambridge, MA (currently snowing). I am sure that many of you are working towards your AL pins (and the special prize our president has promised). I am curious - how many binocular observations can one accumulate in a month, assuming clear skies?

That's an interesting question Stella. I find that I can get around 3-6 or so variables in an hour of observing. I'm curious to hear other observers' responses.

I have got about 25 binocular variable observations in the past few weeks by straining to take advantage of clear periods of a half hour or several hours whenever my schedule allows. Probably the most interesting aspect of this President's Challenge is the tricky weather during this time of year (eastern North America anyway). Long stretches of cloudy nights that may or may not coincide with moonless nights!

I'm totally in.  I've got about 20 more observations to do.

This really is so much fun.  Binocular variable star astronomy has reclaimed weeknight astronomy for me.  I keep my charts in the garage in a file folder box next to my Pocket Sky Atlas.  My 10x50s live permanently on a Peterson binocular mount.

After dinner (or a bit later as the sunsets get later and later), I open the garage door, lift out the binocular mount, place it a few feet down the driveway, pick a constellation or two and get the charts and start observing.

No lugging out a scope, no multiple trips, no fussing with eyepieces, no cooldown, no collimation, no alignments, batteries or computers.  It's bliss.

I often feel a little uncomfortable stating this, but "doing science" is far down the list of my motivations for doing variable star astronomy.  I do it because it is astronomy I can do from my driveway on a weeknight when I'm a little tired and only have 15-30 minutes for a session.  As I get older, it is becoming increasingly important for me to maximize my time under the stars, even in the light polluted city.  Binocular variable star astronomy allows me to do just that.  (An ancillary benefit is that it keeps my star-hopping skills up for when I am able to get out under dark skies.)

And if tomorrow or decades in the future someone finds that one of my observations contributed in a small way to something interesting, then so much the better. :)

I totally agree Michael, this challenge has revealed a fun way to observe variables. I finished mine a week ago, and I'm away from home this week (and won't be at next week's AAVSO meeting with the pin, as originally intended) but binocular variable observing is definitely a part of my variable star observing program from now on!

It has been a very busy Spring for me so I won't even meet my own deadline :/ But I promise to have pin in hand by the Fall meeting (and be well on my way to the regular AL Variable star pin).

I accepted the binocular variable star challenge and have recently completed my observations.  I have submitted the observations for the award and plan on being in St. Louis later this week.  Thanks Kris for coming up with the challenge.  I will continue to follow this forum topic as others complete the challenge.  I may even add some thoughts on favorite variables and my strategy for completing the observations as recommended by Kris.  Being a new observer, I am still getting used to the fact that observing can only take place a few nights each month in my location here in Missouri. Also, my location has plenty of city lights with a naked eye limiting magnitude around 4.

If AAVSO is an AL affiliate, I may be in; 570 OBS of 15 bino-stars.  If not, It was very relaxing.  Great fun. Just now signed up for AL in KC MO. Guess I get a new planisphere or something. Maybe I need to start over on the 60. That will be fun too.

It was a treat recognizing Rich at the StL meeting for compleeting the challenge. I intend to do the same for anyone attending the Fall meeting in MA. The challenge is officially extended until then!

Thanks for the recognition at the meeting in St. Louis and thanks to everyone who made this a great event.  I met so many great people and learned a lot more about variable star observing.  I am thoroughly enjoying looking up at the sky after so many years of never having given it any consideration.  I hope to read that more members have successfully completed the binocular challenge.  Good luck and clear skies!

It was a pleasure giving you a shout-out! I hope to do many more announcements at the fall meeting :)

Am still muddling along on project.  Have 32 observations of 14 stars.  Skies have been very poor these last few months.  Spent last two weeks in Alabama and the humidity is much worse here than in my usual site in Colorado.  Can now only see Ursa Major region through the trees here but was lucky to get Y Cvn, Tu Cvn and St Uma this last week.  Earlier got a look at Eps Aur but it doesn't count unfortunately.

I've been limping along as well. Life just gets in the way :/

But I nabbed a bunch at Stellafane this year and the return of longer nights in the Fall (whoo hoo!) will definitely help.

I don't see the members online display when I log on.  Has it been taken diwn?

Still poking along on binocular variable program with 15 stars and 38 observations.  Hoping to finish by Fall but ........

Unfortunately, the "Who's online" feature of our website was a casualty of last month's website software update. It was not our intention to discontinue it, so it has been added to the list of things still to fix.

Thank you for pointing that out.

I glad it's coming back.  I enjoyed associating observers' codes with their faces.

Are you going to be at the meeting this weekend? I would like to recognize you for your accomplishment! I am still bogged down after doing a bunch at Stellafane in August. I have some eye trouble that surgery will hopefully fix next Tuesday and after recovery I hope to be back at the eyepiece!

Wont be at the meeting, it's a little too far for me.  Finally reached the "magic" number of observations by just slowly poking along at the project.  It also helped when Delphinius and its variables became well situated as it is my favorite region of the sky.

Sorry to hear about your eye trouble but hope you have good results from the surgery.  I had my own eyes worked on a few years ago and had an excellent outcome.

The meeting was great although I forgot to wear my AL binocular variables pin! I got the pin last spring. A very interesting aspect of the Fall meeting was that very little mention was made of visual observing. Regardless, I think that this President's Challenge is worthwhile for lots of visual observers to try as a great intro to binocular observing.

I made a note of your comment and will make sure there is more specific content regarding visual observing! As you saw from Stella's Director's report, visual observing is still at the heart of what we do.