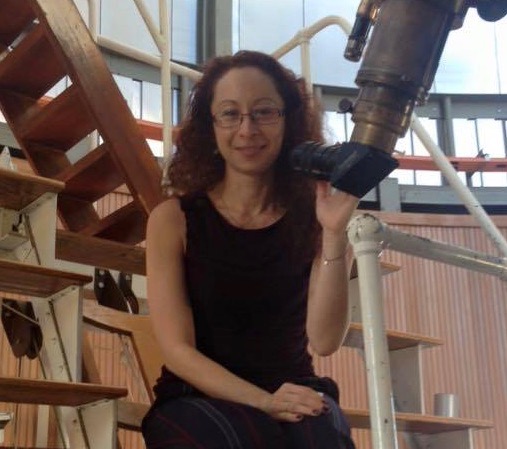 When AAVSO’s incoming Director, Dr. Stella Kafka, published her first astronomical research paper 15 years ago, Janet Mattei was one of her co-authors. Thus Stella and the AAVSO have been linked since the start of her astronomical career. Moreover, collaboration between professional and amateur astronomers has continually shaped her development as a researcher. Now, we are fortunate to be able to solidify Stella’s connection to the AAVSO as she prepares to take the helm from Arne on February 1st. Given Stella’s special combination of talents, skills, and experience, I expect the coming decade to be one of vigorous growth, modernization, and community-building for the AAVSO.

As those in the cataclysmic variable star community know, Stella has an outstanding scientific reputation and research track record. After obtaining her Bachelor’s of Science degree at the University of Athens, in Greece, she moved to Indiana University, where she earned a Master’s and a Ph.D. in Astronomy, with a double minor in Physics and Geophysical Sciences. There she received the Hollis and Grete Johnson Award for Excellence in Graduate Student Research. After completing her Ph.D., Stella held a series of prestigious postdoctoral positions and fellowships, first at the Cerro Tololo Inter-American Observatory in Chile (CTIO, where she received the National Optical Astronomy Observatory Excellence Award), then at Caltech, and finally as a NASA Astrobiology Institute Fellow at the Carnegie Institution of Washington. She has extensive experience gathering, reducing, and analyzing photometric and spectroscopic data; has helped commission two different instruments at the WIYN Observatory in Arizona; and written a data-reduction manual along with more than 40 refereed papers. As a member of the “Stellar Populations” working group for the Large Synoptic Survey Telescope (LSST, the large professional facility that will image the whole sky every few nights starting around 2020), she contributed to the LSST science book. As the Director of the AAVSO, Stella will draw upon her connections and stature in the professional community to make sure that amateur astronomers contribute, thrive, and generally benefit from professional investments in time-domain astronomy during the upcoming golden age of time-domain astrophysics.

But Council did not select Stella as our next Director solely because of her scientific credentials. Equally important, if not more important, is her experience as a manager. In addition to serving as the Director of two research and mentorship programs for undergraduates while in Chile, for the past three years Stella has been managing editorial, marketing, financial, business development, operations, and production aspects of journals at the American Institute of Physics (AIP). As a journal manager at AIP, Stella successfully oversaw the launch of a new journal and served as a liaison between publishing and research communities.

I can personally attest to her organizational skills, and to her love of careful planning. In fact, she has already channeled her passion and vision for the AAVSO into drafting business and marketing plans for consideration by Council. The rare combination of research prowess and management skills that Stella brings to the AAVSO will help us flourish in the ever-changing astronomical world.

On top of her research and management abilities, Stella brings to our international organization a very international perspective. After growing up in Greece, obtaining a Proficiency Diploma in the French language (she has one in English, too), pursuing higher education in the US, and working and traveling in South America (including Chile, Argentina, and Brazil), Stella is fluent in Greek and English, and speaks Spanish and French. Seeing our international membership as one of our key strengths, Stella plans to use her tricontinental background to help her deepen the international scope of the AAVSO, and to build even stronger relationships between the AAVSO and the international community.

But those of you who have spoken with Stella for even five minutes know that I have not yet touched upon what is perhaps her most immediately obvious talent—communication. Stella’s exuberance is irrepressible and contagious. She has a knack for putting this energy into ideas and clearly articulated plans. And because Stella enjoys interacting with people of every age and background, she has honed her communication skills through mentoring students, classroom teaching, lectures to professional and public audiences, and all sorts of professional writing (including scientific press releases with engaging titles such as, “Calling Dr. Frankenstein: Interactive Binaries Show Signs of Induced Hyperactivity”). And then, like all good communicators, she knows when to stop and listen.

This week, Stella arrives at Headquarters to spend two weeks working with Arne to prepare for the official Directorial transition on February 1. Although we are sad to see Arne go, he leaves the AAVSO in a strong state. We all wish him the very best in “retirement.” Because of Arne’s vision, fundraising agility during a tough economic period, and tireless work on behalf of our organization, Stella will be able to immediately focus on growth and new initiatives. Feel free to drop her a line. Stella wrote her first paper with Janet; perhaps she can write her next paper with you.