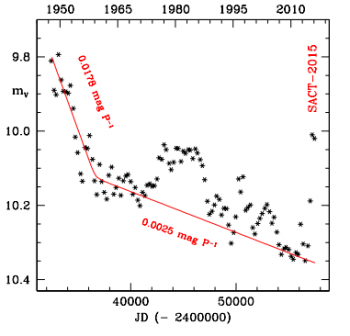 The recurrent nova T CrB has entered in 2015 a phase of unprecedented high activity. To trace something equivalent, it is necessary to go back to 1938, before the last nova eruption in 1946. The 2015 super-active state is characterized by: a large increase in the mean brightness (Delta B =0.72 mag over the uderlying secular trend), vanishing of the orbital modulation from the B-band lightcurve, and appearance of strong and high ionization emission lines, on top of a nebular continuum that overwhelms at optical wavelengths the absoption spectrum of the M giant. Among the emission lines, HeII 4686 attains a flux in excess of Hgamma, the full set of OIII and NIII lines involved in the Bowen fluorescence mechanism are strong and varying in intensity in phase with HeII 4686, and OIV and [NeV] are present. A large increase in the radiation output from the hot source is reponsible for a large expansion in the ionized fraction of the M giant wind. The wind is completely ionized in the direction to the observer. A high electron density is supported by the weakness of forbidden lines and by the large amplitude and short time scale of the reprocessing by the nebular material of the highly variable photo-ionization input from the hot source. During the super-active state the nebula is varying to and from ionization-bounded and density-bounded conditions, and the augmented irradiation of the cool giant has changed the spectral type of its side facing the hot source from M3III to M2III, i.e. an increase of ~80 K in effective temperature.

Read the pre-print on arXiv