Professional astronomers have a critical need for continuous data. With billions of stars, a consistent stream of data on enough stars is impossible to attain if only professional astronomers observe and record data. Even back in the late 1800's, this problem was evident, and those passionate about astronomy and increasing scientific knowledge worked to fix this. The founding of AAVSO in 1911 by William Tyler Olcott was possible because such passionate and dedicated people (known today as citizen scientists) developed star observation skills and collected and recorded accurate variable star data for professional use. Each of the thousands of these observers throughout AAVSO’s history remain to this day to be an enormous contributing factor to the success of the AAVSO and to scientific discoveries. As early as 1856, people who were not educated in astronomy at the university level, but who were instead self- and peer-taught, added to what we know about stars. Their unified desire to provide meaningful contributions to science, and their willingness to educate others and collaborate, fueled the formation of AAVSO. Today, hundreds of observers use AAVSO's education, tools, and mentoring program to add observations to our growing fleet of verified databases.

AAVSO has certainly grown since it first started out:

The Need for, and Development of, AAVSO

Benjamin A. Gould, the American astronomer and editor of The Astronomical Journal (published in Boston), was the first American to study astronomy in Germany. There he became a pupil and friend of many other astronomers, including Friedrich Wilhelm August Argelander. In 1956, in the United States, Gould he called for variable star observations and supported the variable star work of observers who did not partake in astronomy as a profession. In Argelander’s 1843 star catalogue, Uranometria Nova, Argelander encouraged the study of variable stars. Gould's 1979 catalogue of southern stars, Uranometria Argentina, complemented Argelander's catalogue.

In 1882, Harvard College Observatory (HCO) Director Edward C. Pickering published A Plan for Securing Observations of the Variable Stars, in which he proposed enlisting the help of volunteer variable star observers, as did other astronomers in the 1880s and 1890’s. He published their observations or passed them to HCO or other observatories for further study. At this point, a formal organization of amateur observers was not yet conceived.

During the 1890s, the emergence of new observing techniques, such as photography and spectroscopy, led to thousands of new or suspected variable stars being discovered. This proliferation of discoveries overwhelmed the resources of observatories such as HCO, and underscored the need for many more amateur astronomers to become involved in observing variable stars.

To engage an abundant number of newcomers in variable star observing, while ensuring the quality and consistency of measurements, Pickering simplified the process of collecting variable star data. In 1891, he published comparison star charts, and by 1906 he provided charts with comparison stars marked on them, and instructed observers in the technique of comparing the variable star to their neighbor stars of known and standard magnitudes.

Between 1906 and 1910, Pickering reported that about 6,000 observations of long period variable stars were "kindly communicated by other astronomers."

In March 1911, Popular Astronomy published an article by Olcott, "Variable Star Work for the Amateur with Small Telescopes,” in which Olcott echoed Pickering's 1882 appeal to the casual star gazer to turn their eyes and instruments to a purposeful activity in the service of science: “It is a fact that only by the observation of variable stars can the amateur turn his modest equipment to practical use, and further to any great extent the pursuit of knowledge in its application to the noblest of the sciences.” The significance of Olcott's article is that for the first time, a novice American amateur astronomer was addressing other novice amateur astronomers on the subject of variable stars in a general circulation popular journal. Olcott's piece was all-encompassing: an appeal for observations, an explanation of variables and methodology, and an invitation presented in a warm and friendly tone, accompanied by a number of Pickering’s simplified finder charts and light curves. It was written specifically to be understood by novice amateur astronomers like Olcott himself, who could be found amongst the public at large, anywhere in the United States.

In HCO Circular No. 166 of June 1911, "Cooperation in Observing Variable Stars," Pickering published a list of stars that needed to be observed and the observers willing to participate in this project. Although Pickering had his organized group of observers, and their names were now out there, AAVSO did not yet exist. (Many of his observers did not make the jump to AAVSO once it was in effect).

In the August 1911 issue of Popular Astronomy, editor, H. C. Wilson published his notice, "What an Amateur Can Do," in which he asked, "Can we not have in America an association of observers with a 'Variable Star Section', a 'Jupiter Section', etc.?".

William Tyler Olcott answered Wilson’s notice in the November 1911 Popular Astronomy issue by announcing the formation of AAVSO and offering to correspond with anyone interested in organizing to observe variable stars.

By the end of 1911, Olcott was corresponding with other amateur astronomers; sending them observing instructions and charts; and collecting their observations, submitting them to Pickering at HCO, and preparing them for publication in Popular Astronomy (the first 208 observations appeared in the December 1911 issue). By the end of the first year, AAVSO published over 6,000 observations of variable stars in the publication.

Throughout 1911 to 1925, AAVSO defined its identity. United by a love of astronomy, telescope-making, and observing, the membership was made stronger through a common purpose and a scientifically important goal of reliably and efficiently providing researchers with long-term variable star measurements.

When the Variable Star Section (VSS) of the British Astronomical Association (BAA) formed in 1895, it was the first such group to use the standard comparison star charts prepared in 1891 by Pickering. 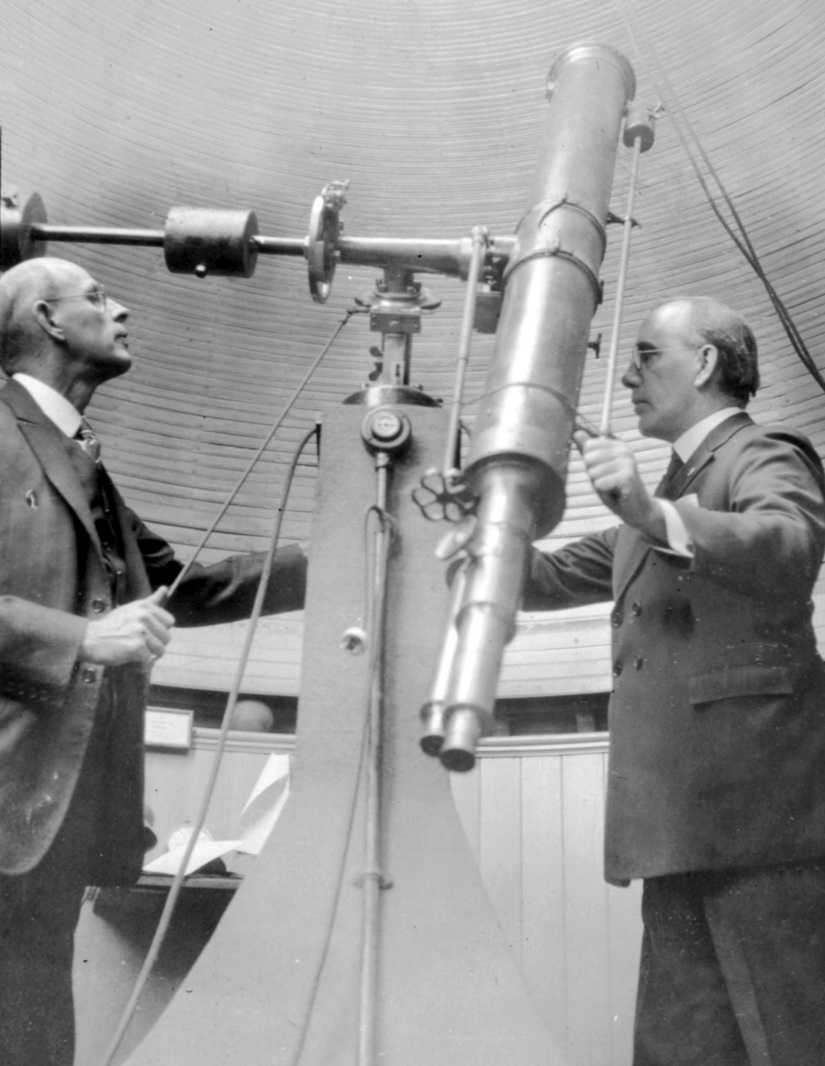 (Image, left: AAVSO members David Pickering and Morgan Cilley using AAVSO's C.A. Post Memorial Telescope—erected at HCO in 1922. Back then, one person read the position, while one moved the telescope.)

AAVSO founding member Stephen Hunter traveled to Europe in 1921 and explained the value of amateur variable star work, and encouraged the Lyon Observatory to set up an observing program. Hunter also had a meeting with Henri Deslandres, an astrophysicist of the Institut de France at Paris, Meudon, about how to promote amateur associations of variable star observers. Soon after, in June 1921, the French Association of Variable Star Observers (AFOEV) was founded by Grouiller, Jean Mascart, and amateur astronomer Antoine Brun.

The contributions to AAVSO from its international observers are very valuable, and the organization also enjoyes growing its relationships with other astronomy organizations. However near or far an observer is to AAVSO's brick-and-mortar in Cambridge, MA, USA, AAVSO’s databases are digital. Ships and pigeons are no longer required to send data, which makes submitting data as an international member much easier and quicker than in the early years of AAVSO. The importance of receiving information on stars seen from all over the world cannot be overstated.

In 1953, after long deliberation, the people who funded AAVSO as a part of Harvard made a difficult decision for how to allocate limited finances, and thought that the variable star data gathered thus far by AAVSO was enough for future astronomy research to be based on. Margaret W. Mayall, AAVSO's Director from 1949 to 1973, knew that years of upcoming continuous data and star event observations would be vital to further research and discoveries. She used her knowledge and passion as fuel, leading AAVSO through a trying transition into independence (and a new location).

The passion among AAVSO members and observers for teaching, collecting data, and maintaining an organized group with a common goal has remained the same. Educating one another has remained a crucial component to the participation of observers and to the success of AAVSO. Today, AAVSO members and observers participate in advice forums, are partnered in the mentorship program, and instruct and/or are students of online CHOICE courses.

Despite the growing of space technology, including satellites, the data on stars from humans on Earth’s terrain remains incredibly valuable. Variable star data submitted to AAVSO’s multiple databases are frequently used by astronomers and astrophysicists, and are published in papers on a regular basis.

(Each observer gets an observer code, and your observations always have your code attached to them).

We cannot wait for you too, to become a part of AAVSO and important astronomy history!

For full benefits of the AAVSO, please click here

For a full history of AAVSO, please click here

If interested, a book by Thomas R. Williams and Michael Saladyga, Advancing Variable Star Astronomy: The Centennial History of the AAVSO, is available in hardcover from Cambridge University Press, or as a Kindle e-book on Amazon.com. A free and downloadable Errata sheet accompanies the book separately.