V404 Cygni has been known as a variable star residing in the constellation Cygnus since the 18th century. It was believed to be a nova, a compact binary system containing a white dwarf primary and a sun-like secondary star, that undergoes unpredictable episodes of dramatic brightening - or 'outbursts' - before settling back down to quiescence for decades, until the next outburst.

The last outburst occurred in 1989. At that time, V404 Cyg released enormous amounts of energy in the x-ray, optical and radio wavelengths for several months before quieting back down again. The 1989 outburst offered the first chance for astronomers of the space age to observe V404 Cyg with satellites and ground based telescopes. From what they learned, V404 Cygni was reclassified as one of a new class of X-ray transient sources called low mass X-ray binaries (LMXBs), x-ray emitting binary systems where one of the components is either a black hole or neutron star. 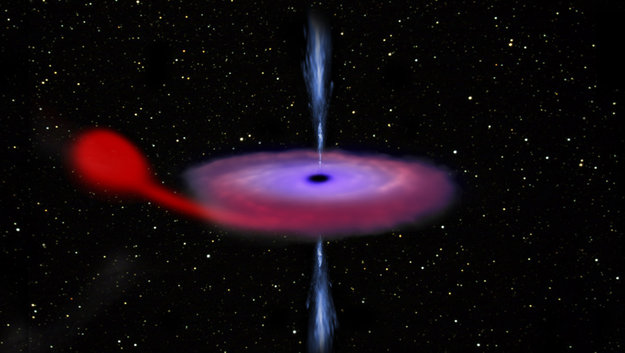 On June 15th, 2015- after a 26 year wait- V404 Cygni woke up again. The first signs of renewed activity were spotted by the Burst Alert Telescope on NASA's Swift satellite, when it detected a sudden burst of gamma rays. This then triggered observations with its own X-ray telescope. Soon after, MAXI (Monitor of All-sky X-ray Image), part of the Japanese Experiment Module on the International Space Station, observed an X-ray flare from the same patch of the sky.

These observations triggered alerts throughout networks of professional and amateur astronomers around the world, causing hundreds of instruments to point towards the latest outburst. Analysis of this unprecedented amount of data has begun to bear fruit.

One international research team found that observations of black hole binary outbursts in visible light could reveal important phenomena, such as the flickering light emerging from gases surrounding the black hole. The team's results, published in Nature, indicate that optical rays and not just X-rays provide reliable observational data for black hole activity.

"We now know that we can make observations based on optical rays -- visible light, in other words -- and that black holes can be observed without high-spec X-ray or gamma-ray telescopes," explains lead author Mariko Kimura, a master's student at Kyoto University.

Based on analyses of optical and X-ray data, Kyoto astronomers and their collaborators showed that the light originates from X-rays emerging from the innermost region of the accretion disk around a black hole. These X-rays irradiate and heat the outer region of the disk, making it emit optical rays and thus becoming visible to the human eye.

These important outburst observations were the fruit of international collaboration across countries in different time zones.

"Stars can only be observed after dark, and there are only so many hours each night, but by making observations from different locations around the globe we're able to take more comprehensive data," says co-author Daisaku Nogami. "We're very pleased that our international observation network was able to come together to document this rare event."

The team obtained unprecedented amounts of data from V404 Cygni, detecting repetitive patterns having timescales of several minutes to a few hours. The optical fluctuation patterns were correlated with those of X-rays.

Four members of the American Association of Variable Star Observers (AAVSO) are listed as co-authors on the paper in recognition of the high quality optical data they supplied to the research team - William (Bill) Stein, Michael Richmond, William (Bill) Goff and Lewis M. Cook.

"It is not a star I normally observe", explained Bill Goff, "but when I saw AAVSO Alert Notice 520 requesting observations I decided to get on it."

Bill continued, "The observations made on this target were immediately exciting.  Seeing changes greater than one magnitude in less than an hour, and some high frequency changes occurring in the minutes range, was a wonder to see. I kept imagining how this target must be going through unbelievable eruptive changes."

The Nature research paper can be downloaded here: