Time is one of the most important quantities in any physical system. Astronomers often collect data over months or even years, and sometimes analyze very old data (even that taken by ancient observers thousands of years ago). Hence we need an efficient method for recording time. 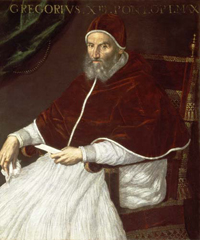 The usual system of calendar dates is clumsy, for several reasons. For one thing, the calendar system has changed many times in the past. The modern Gregorian calendar was introduced on the orders of Pope Gregory XIII in late 1582; it replaced the Julian calendar, which had been constructed on the orders of Julius Caesar around 50 B.C. For another thing, the calendar system is inconsistent between dates before and after the year 1. There is no year zero, even though any numbering system should include 0. Worst of all, most of the units used in calendar dates are not constant; for example, leap years are 366 days long, while most years are 365 days.

NOTE: By order of Pope Gregory XIII, the Julian calendar was replaced by the Gregorian calendar in late 1582, so that the calendar day following Oct. 4, 1582 was Oct. 15, 1582. Most (but not all) historical dates prior to 1582 are JULIAN calendar dates. To make matters worse, the protestant nations of Europe were slow to adopt the Catholic calendar reform (Great Britain did not adopt the Gregorian calendar until 1752). As if that weren't bad enough, when Julius Caesar, on the advice of the astronomer Sosigenes, introduced the leap year to create the Julian calendar, the keepers of the calendar mistakenly recorded leap years every THREE years, instead of every FOUR (as was, of course, intended). Unfortunately, Sosigenes was dead at the hands of the Egyptians and Caesar was dead at the hands of the imperial senate, so the mistake persisted until corrected by Augustus Caesar in 8 B.C.