In a past SID Technical Bulletin (April 1997) I described a simple to build A/D converter for SID computer logging. The unit converts the voltage output from the Stoke's gyrator VLF receiver into digital data for storage on the computer. The original construction was based on an article written by Mike Gray (Amateur Radio Today, August 1996) in which he provided a schematic for the circuit and a software module for clocking data from the converter. With slight modification I built the Gray design and it has worked admirably for the past year. As a result of the original article, I was flooded with requests for A/D converter information. At least 4 of these units have been successfully built by other observers who are achieving satisfying results and have passed along some suggestions for improvement. This article describes progress in computer logging of SID events motivated by the much appreciated feedback from other users.

Encouraged by my original article, Cap Hossfield, the SID Coordinator, purchased one of Mike Gray's kits and was very pleased with the quality. I chose to build my first unit from scratch and selected substitute components which avoided the surface mount parts in the Gray design. As expected, my version is a little bulkier, but does the job. I did not purchase a copy of Gray's software (offered separately) because it lacked some features particularly useful to the SID monitoring program. Discussions with Mike confirmed that his software required user inputs to start logging and didn't include an option to schedule logging start/stop times. I wrote the LOGGER.EXE program in QuickBASIC (DOS 5.0 forward) to provide these necessary features. If power is lost to the computer, the LOGGER.EXE program is automatically restarted upon reboot from the AUTOEXEC.BAT file. The program acquires all necessary settings to commence logging from an external configuration file without user intervention. To minimize data storage requirements, I only record 14 hours per day and so the scheduler feature starts data collection at 1000 UT and stops at 2400 UT daily. 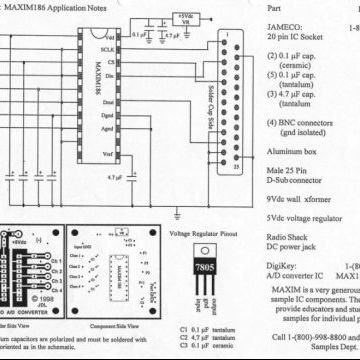 With the A/D hardware and LOGGER software built, I tested the unit for voltage conversion accuracy. Initial tests were disappointing. For a 3.2Vdc input, the software output a 4.095V reading. I connected the A/D to another spare computer and discovered that the same calibrated voltage source input would produce, different output readings on different computers! The problem was not with the software nor my A/D converter. Not all computer parallel ports are created equal. The Gray design expects a +5Vdc power supply from the parallel port connection. I sampled 16 different IBM-compatible 386 and 486 computers and measured parallel port voltages ranging from +3.7V to +5.05Vdc. The MAXIM 186 A/D chip requires +5.OVdc with less than a 0.1V deviation. Only 3 computers out of the 16 provided the A/D the correct power. I modified the design to use an external power supply independent of the computer port. In recent tests on 12 different computers, the A/D conversions agreed to within .03V on all attempts. The use of a wall transformer and an onboard voltage regulator solved the problem.

My first unit was soldered point-to-point on a general purpose printed circuit board. Anyone wanting to build the circuit needed to read the schematic and figure out how to route wires for all the connections. Many initial inquirers lost interest in the project when they learned that no dedicated PCB was available. A former SID group member contacted me and proposed to layout the A/D converter PCB for another research project. He started work on the project, but eventually quit. I completed the PCB effort and can now provide copies at reasonable cost. A price of $2.50 just covers my production cost and postage. The boards come drilled and pre-tinned.

All components for the converter are easily sourced through Jameco and Radio Shack (see parts list). The MAXIM 186 chip can be obtained by requesting samples directly from MAXIM. They routinely will provide sample components to students, educators, and researchers free of charge. For additional convenience, I am offering a kit which includes an instruction sheet, A/D PCB, all components in the parts list (except the MAXIM 186) and LOGGER software for $30. The metal box (photo A) comes machined and ready to insert connectors. Users must obtain their own MAXIM 186 chip to complete the project. 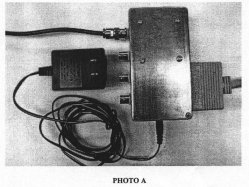 The output files from the LOGGER software may be imported into most spreadsheet programs for plotting. I am presently developing a viewer program which will read and screen display the daily data. Analysis of SID events may be performed by scrolling along the plot to extract start, stop, and maximum event times. Hardcopy screen plots may be sent directly to your printer. Cap Hossfield and I have discussed the feasibility of observers sending him diskettes of daily files rather than stripchart rolls. A reliable user-friendly A/D converter and computer logging of SID event data are the first steps in the effort to move the SID monitoring program into the electronic data age.