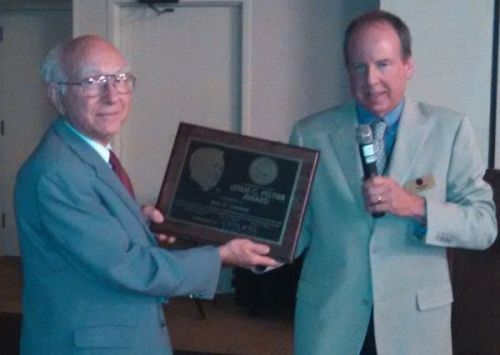 Dr. Landolt, Ball Family Professor Emeritus with the Department of Physics & Astronomy at Louisiana State University, is best known for his photometric standard star lists. “Landolt standards” are the stars used by the entire astronomical community to calibrate stellar photometry.

His most quoted paper, published in 1992, has been cited in the professional astronomical literature over 3800 times—an average of 172 times per year. For comparison, the number of times a typical astronomical paper is cited is in the single digits per year, and rarely, if at all, after 20 years.

To compile the necessary data for the Landolt standard stars, Arlo has spent at least 1500 nights observing at different telescopes over the years since 1958: possibly an all-time record for a professional astronomer! Nor has formal retirement slowed him down; over half of these nights have been in the last 15 years.

Dr. Landolt, recently celebrated 55 years of observing at Kitt Peak National Observatory (KPNO). In the summer of 1959, Dr. Landolt was the first guest observer at KPNO when the only telescope on the mountain was the 16-inch site survey telescope.

In 1965, Landolt was the first discoverer of a pulsating white dwarf when he observed that the luminosity of HL Tau 76 varied with a period of approximately 12.5 minutes.

In 1995, he received the George van Biesbroeck Prize from the American Astronomical Society.

The asteroid 15072 Landolt is named after him.

Now his name is added to the list of AAVSO members and observers who have received the Leslie C. Peltier Award.