I'm Matthew Kenworthy, an associate professor of astronomy at Leiden Observatory here in the Netherlands. I've been coordinating and collecting the observations of J0600 from the AAVSO together with observations from the Very Large Telescope, LCOGT, the Southern African Large Telescope, and the IRTF in Hawaii.

Together we're building up a picture with what's happening towards J0600, and the best hypothesis so far is that there is a giant ring system almost 1au in diameter around an unseen secondary companion orbitng around J0600.

The AAVSO measurements are crucial in understanding the substructure in this disk - the variations in a single bandpass tell us about the density and structure of the rings, and the multiple different bands tell us the scattering properties of the intervening dust, basically it allows us to guess what sizes the dust is. If we can see a variation in dust size as a function of distance across the rings, this would be very exciting.

Previous photographic plate data (from the Harvard DASCH archive) suggested another eclipse at least three month's in duration about 82 years ago, so we were expecting the eclipse to have finished now - but it hasn't! The latest observations as the star goes behind our Sun show it is still varying from day to day.

Following the light curve of the star as it comes back into the twilight sky in August is therefore still critical for constraining the size of this system. If we get a full map of the light curve and can invert it to get the ring structure, this is one of the first times we will have detailed substructure of a circumsecondary/circumplantary disk!

Many thanks to all of you who have contributed observations of this star, and I hope you are willing to pick it back up when it re-emerges back in August! A subset of the data is shown in the plot below: 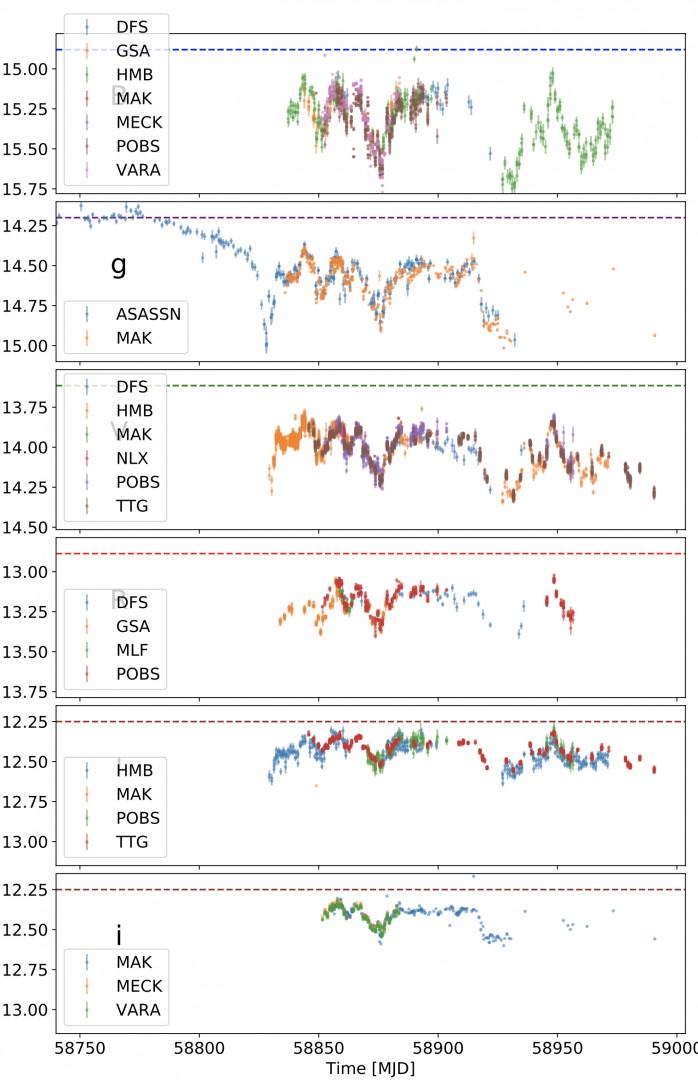 Hello again, many thanks for all the observations that you have taken on J0600 - the star continues to be highly variable, with a significant dip seen in the past two weeks. Thanks to a telescope in Antarctica, we have continuous photometry throughout the southern Winter, and J0600 is rising again in the night sky.

Any additional photometry that you can take would be very appreciated - we're not sure when the eclipse will end, so even a few points per night are useful to make sure we have coverage of substructure in the eclipsing object.

I've included the light curve to date below - many thanks and clear skies,

Hello all, many thanks for all the observations that you have taken on J0600, thanks to all the observers we now appear to have a complete light curve! The eclipse appears to have ended about two weeks ago, but I would still ask for observations to be taken, since we've been caught out with this system before and it may start eclipsing again....

The latest light curve is shown in the image below:

The plan is to combine the photometry together and present an analysis of the size of the dust - with the observations we have, we can now distinguish between the average size of the dust blocking the star, and the surface density of the dust.

We're hoping that the analysis will show that the dust size changes with time, and that we can fit a ring model to the peaks and troughs throughout the whole eclipse!

More posts as we continue our analysis,