Behind the Scenes at AAVSO: VSX 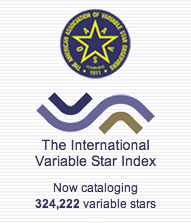 Another watershed moment for the AAVSO happened last week. The number of entries in the International Variable Star Index (VSX) passed the 300,000 mark. The total number of variable stars in VSX had been hovering around 286,000 for quite a while, and then suddenly it became 324,000 on May 21, 2014. How did this happen, and who is responsible?

The short answer is, Patrick Wils. Patrick is another unheralded volunteer working tirelessly updating and improving VSX on a daily basis. He is responsible for keeping up with the continuous flow of CV discoveries from MASTER, ASAS-SN and the Catalina Real Time Survey, adding entries to VSX and assigning AUIDs to the objects so observers can report observation to the AID.

The more complete answer starts with the publication of The Catalina Surveys Periodic Variable Star Catalog by A. J. Drake et al, May 16 this year. This catalog combines ~47,000 periodic variables found during the analysis the Catalina Surveys Data Release-1 (CSDR1), with RR Lyrae stars from their previous work to produce an on-line catalog containing periods, amplitudes, and classifications for ~61,000 periodic variables. About 8,000 of those stars are previously known variables.

What Patrick did was select all the stars in the catalog that were not within 6" of a VSX object.  There were 38,358 of those. They were all uploaded to VSX.  It is possible that there are duplicates of stars already in VSX among those, because the positions in either VSX or CSDR1 may be off, due to blending, old inaccurate positions, simple errors, etc., and he and Sebastian Otero are working to eliminate as many of those duplicate entries as possible.

You’d think after putting in that kind of effort and looking forward to months of work to check and improve the results, Patrick might take a break for a while. He’s not. He has more on his to do list, as he wrote to me last week, “I'm still working on the other objects.  I have to check whether the Catalina catalog improves anything on the data we have in VSX (position, type, period, range). That will take a lot more time. And perhaps some interesting object turns up there!”

While numbers aren’t everything, it is worth noting that the General Catalogue of Variable Stars contains approximately 48,000 variable stars and the New Catalogue of Suspected Variable Stars and its supplement contain about 25,000 suspected variables for a total of about 63,000 stars. All of those are included in VSX, many of them with updated and improved information. Thanks to Patrick and several other dedicated people, VSX contains information on five times as many objects.