Anyone observing this target?  I'm surprised I have not seen any posts about this one -- just not on the right lists? Other observers report observation in a sketching forum as well :

and here in the variable star observation forum:

In those links you will get a lot more info. It's in fact a very easy SN, the maximum must be off now but surlely still visible.

Thanks for your excellent sketces, Michel.

I got a BVRI series on 6-11, but have not attempted photometry, since there is a lot of background galaxy noise.  I'll attempt to post a 120-sec Luminance frame, quickly stretched, rotated and cropped in ImageJ.  North is up.

I calibrated my relatively weak spectrum and corrected it for instrument response (attached).  There is a significant absorption feature from Si II at about 6120 A, so compared to its rest wavelength of 6355, it appears blue-shifted at about 3.84% C, or ~11,500 km/sec.  Spectral dispersion = 11.1 A/px.

I now need to get more data (and longer integrations) to improve SNR.  I used a median combine of 5 x 120 sec with a Star Analyzer-200 in the filter wheel of a Planewave CDK-17, with an Apogee Alta U16M camera.  Useable, but dim!  Will aim for better data.

I'm following this event from Rochester, NY.  It's just passed maximum light in B and V, but it is still a pretty bright object, as SNe go.

I'm planning to make a light curve for the first 60-90 days or so and see if it's worth publishing.  I've missed a few nights already due to poor weather in Rochester, and will miss more in the future, I'm sure.  If any AAVSOers have some images of the object -- especially if you have multiple nights, and plan to get more -- through standard BVRI filters, and you'd be willing to collaborate, please contact me: mwrsps@rit.edu.  I'll happily add co-authors to any eventual publication, if the data turns out to work well together.

Thanks for any interest.

OOPS!  As pointed out by a more experienced "spectrographer" (?) I neglected to account for the recessional velocity of the host galaxy.  NGC 4125 has a z value of 0.0045, or about 1350 - 1500 km/sec, so I need to add that to the figure derived from my spectrum, so the corrected  rate of expansion would have been approximately 13,000 km/sec on June 11.

I may get more BVRI images and spectra over the next few nights, and will be interested to see how the spectrum evolves -- as well as the light curve.

I made an early observation of the supernova on the night of May 28 not long after its discovery.  Posted to my facebook.  Here's a copy of my post.  The telescope used was a 17.5-inch Dobsonian and the magnification was 380x.

"Made a visual sighting of the supernova SN2016coj in NGC 4125. Estimated it around 14.7. Then viewed a number of galaxies in this area of Draco as I had not viewed them before. Should put me over 4900 galaxies now. The supernova is the 114th or 115th that I've seen."

Also made a visual sighting of SN 2016ccz on the night of June 4.

"Made a visual sighting of the Type Ia supernova SN 2016ccz in Markarian 685. At 380x with the 17.5-inch it was more difficult than the 15.5V star to its north, but the supernova was right on the southern edge of the galaxy. The galaxy was a very small oval oriented east to west and some 20" long. At times the galaxy seemed to fan out northward from the supernova."

I had planned to look at SN 2016coj again that night, but the time got away from me.

As mentioned above, I'm putting together a light curve of this supernova in the BVRI passbands. It's going to be tough, especially in the red bands, due to the light of the galaxy, but I'll try. Below is a preliminary light curve based on measurements from the RIT Observatory in Rochester, NY.   As you can see, bad weather prevented me from seeing the peak of the curve -- rats!

Several people have offered to send me CCD images they have taken.  Thank you all very much!  Having finally caught up with the backlog of my own observations, I will now be analyzing the images that you have kindly sent (or will send).

Is it possible for the AAVSO to make a list of nearby stars with good photometry?  I've tried to put together a preliminary list using the UCAC4 -- see the description at http://spiff.rit.edu/richmond/ritobs/jun14_2016/jun14_2016.html -- but it is not good at all.  I know that some of the AAVSO staff are really good at this; can anyone help? 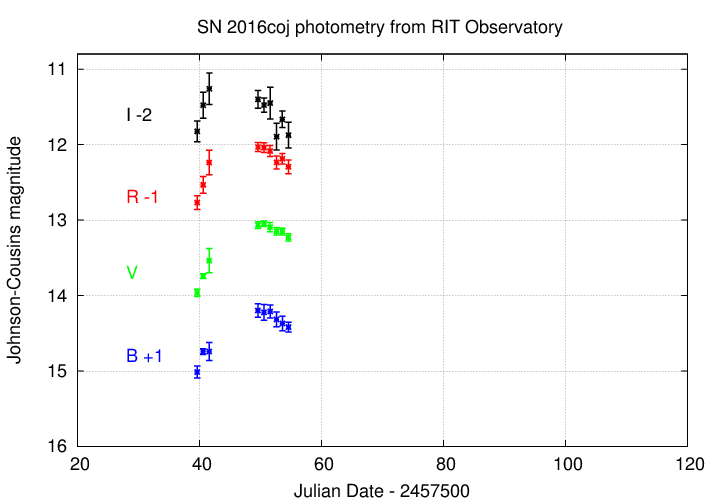 The sequence team just uploaded a sequence for this target... check both E & F scale charts to 16.6.

FYI, for a number of years now we have had a procedure for observers to request a sequence, when none at all exists... wish the word could get around better... observers would get a quicket response if they used this tool:

Tim and the Sequence Team,

Thank you very much for your quick response.  That sequence is just what I needed in B and V.   Unless I'm missing something, though, I don't see any R or I photometry.   Is it possible for you to add some information in those bands?

The Rc & Ic Phtometry already exists.  You need to go to the bottom of the VSP page and select the filters that you want photometry displayed for; this is a common mistake so do not feel bad about it.

I also have to point out that forums are the least useful way  to request sequence data as it depends on whether or not a sequence member happens to read a specific forum request and is motivated to deal with it....also such requests within a forum usually do not contain the necessarily information which just increases the time and effort required of sequence team members (hey, we are just volunteers also)..

If you determine that a sequence is inadequate to your needs then please file a CHET:

If there is no existing sequence data at all then make your request here:

Using the appropriate one of these tools will generally get you a much faster response than discussing desires within a forum.

My most recent measurements of SN 2016coj show it continuing to decline after peak light in the B and V bands, but suggest that it may be rebrightening in the I-band. This is a common behavior for ordinary type Ia supernovae.

The figure below compares SN 2016coj (big points with errorbars) to SN 2011fe (small circles, arbitrarily offset in magnitude). Note that the rise to secondary maximum may be occurring slightly earlier in 2016coj, though there's a lot of room for argument. 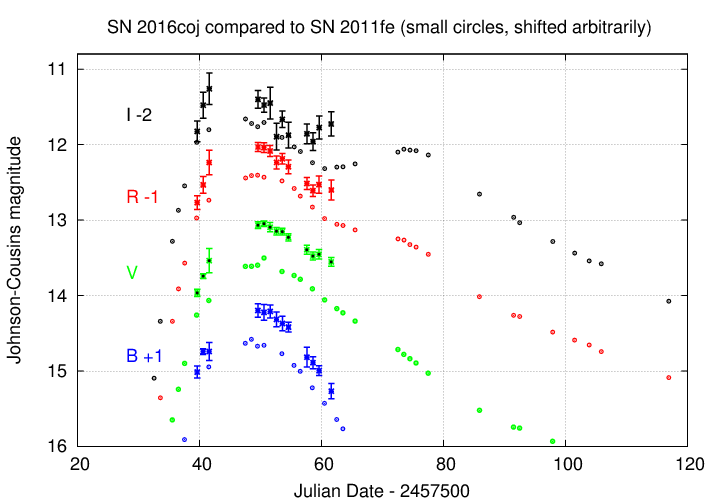 The lack of a moon has made it a bit easier to follow this SN as it fades.  The light curve now shows the secondary peak in I-band, and the gradual decline afterwards.

I'm not sure how long I'll be able to follow it -- probably I'll quit at the end of July.  Observers with big telescopes who can keep measuring it later than that -- please let me know. 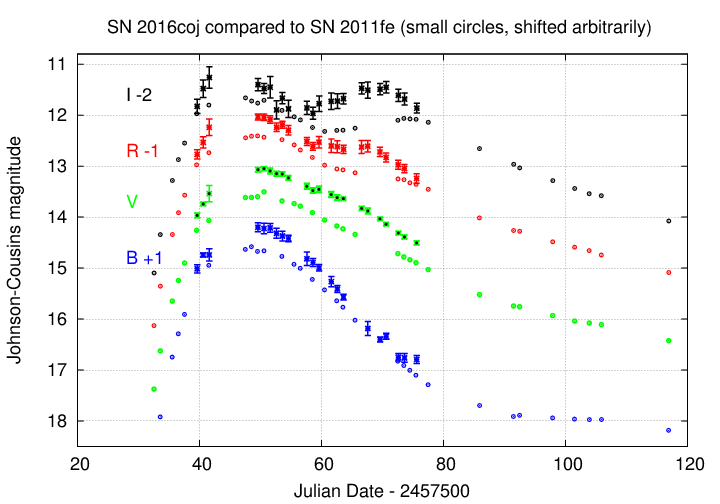 SN 2016coj in NGC 4125 has continued to do what ordinary Type Ia supernovae do -- fade away after its primary and secondary (in red light) maxima.   The object is growing so faint -- around V=15 -- that the light of the host galaxy is starting to overwhelm it, and I can't measure it very well.  In the light curve below, note the apparent small "bump" in brightness around day 90 on the graph.  Such a feature is quite unexpected in a supernova's evolution, so I'm pretty sure it's an artifact of some kind, but it shows the decreasing quality of my measurements.  I had to give up on the B-band measurements a week ago because I can't get enough signal in the short time I have after sunset.

If someone with a big telescope could get even one epoch of solid measurements, it would help to check that my data don't have any big systematic errors at these late times.   If you can even take deep images through standard VRI filters, I'd be happy to do the rest of the work.  Just let me know. 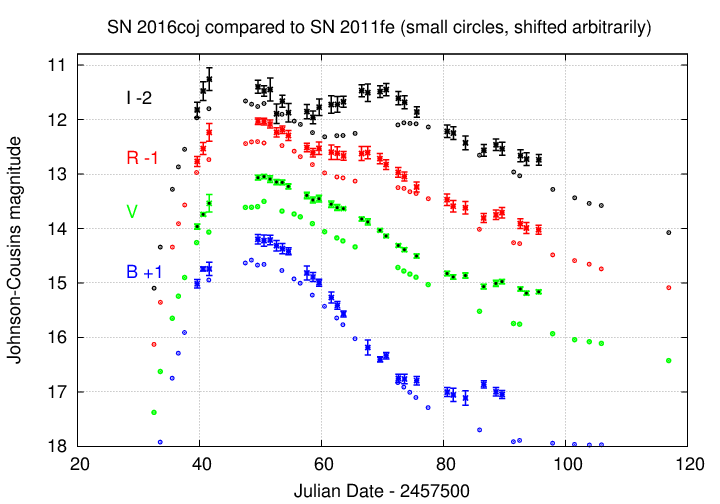