Could a Milky Way Supernova Be Visible from Earth in Next 50 Years? 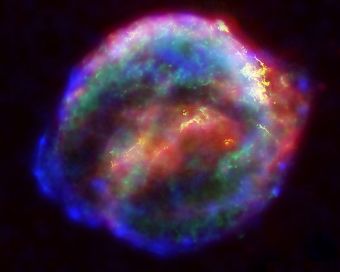 Astronomers at The Ohio State University have calculated the odds that, sometime during the next 50 years, a supernova occurring in our home galaxy will be visible from Earth.

The good news: they’ve calculated the odds to be nearly 100 percent that such a supernova would be visible to telescopes in the form of infrared radiation.

The bad news: the odds are much lower—dipping to 20 percent or less—that the shining stellar spectacle would be visible to the naked eye in the nighttime sky.

Yet, all this is great news to astronomers, who, unlike the rest of us, have high-powered infrared cameras to point at the sky at a moment’s notice. For them, this study suggests that they have a solid chance of doing something that’s never been done before: detect a supernova fast enough to witness what happens at the very beginning of a star’s demise. A massive star “goes supernova” at the moment when it’s used up all its nuclear fuel and its core collapses, just before it explodes violently and throws off most of its mass into space.

“We see all these stars go supernova in other galaxies, and we don’t fully understand how it happens. We think we know, we say we know, but that’s not actually 100 percent true,” said Christopher Kochanek, professor of astronomy at Ohio State and the Ohio Eminent Scholar in Observational Cosmology. "Today, technologies have advanced to the point that we can learn enormously more about supernovae if we can catch the next one in our galaxy and study it with all our available tools.

Read the pre-print on arXiv