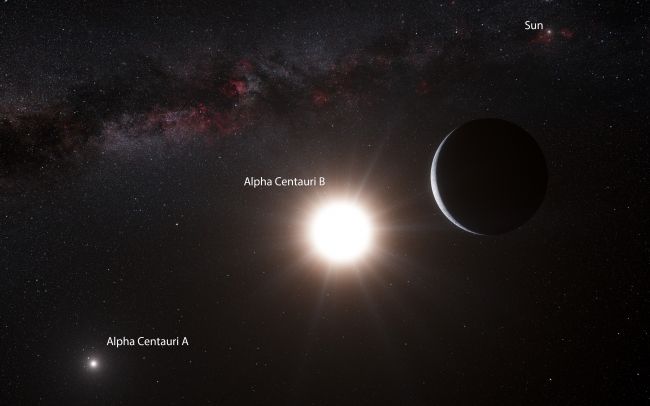 One of the most exciting exoplanet discoveries in decades was announced yesterday in an online ESO press conference. The discovery was to be officially announced in an article in the journal Nature today, but due to the excitement surrounding this discovery ESO and Nature agreed to lift the embargo a day early. I think they realized they weren’t going to be able to keep the lid on it for another day. The fact that an Earth sized planet had been discovered orbiting one of our nearest stellar neighbors, Alpha Centauri B, was a headline dying to be exploited by the press.

The planet was detected using the HARPS instrument on the 3.6-meter telescope at ESO's La Silla Observatory in Chile. HARPS can measure the radial velocity of a star with extraordinary precision. A planet in orbit around a star causes the star to move towards and away from an observer on Earth. Due to the Doppler effect, this radial velocity change induces a redshift of the star's spectrum towards longer wavelengths as it moves away and a blueshift as it approaches. This tiny shift of the star's spectrum can be measured with a high-precision spectrograph such as HARPS and used to infer the presence of a planet. Of course it’s not quite as simple as that.

How Do They Do That?

Alpha Cen B is a spectral type K1V star only slightly less massive than our Sun and cooler. There are a lot of competing signals combined in the light from Alpha Cen B, inducing a radial-velocity “jitter”. In the process of filtering out these additional sources of noise the team of astronomers was able to learn quite a bit more about the star itself. They determined that the star has spots like our Sun. As a star rotates, spots will appear to move from one side of the stellar disk to the other, introducing a periodic signal. This will correspond to the rotational period of the star. The radial velocities of Alpha Centauri B show a clear signal at 38.7 days, the rotational period of the star. They also learned the star has a solar-like star spot cycle with activity increasing and then decreasing over the four year period of the observations.

Additionally, the team had to filter out the effects of the radial velocity changes due to the star being a member of a binary system, as well as the fact that on some occasions of poor seeing the light from Alpha Cen B was contaminated with light from the primary, Alpha Cen A. As if that weren’t enough, they also had to remove the effect of the changing velocity of the Earth in the direction of the star as it orbits the Sun before the signal of a small rocky planet orbiting the star could be detected.

“Our observations extended over more than four years using the HARPS instrument and have revealed a tiny, but real, signal from a planet orbiting Alpha Centauri B every 3.2 days,” says lead author of the paper, Xavier Dumusque (Geneva Observatory, Switzerland and Centro de Astrofisica da Universidade do Porto, Portugal). “It’s an extraordinary discovery and it has pushed our technique to the limit!”

Why is this important?

The technical achievement alone makes this an extraordinary discovery. It is the lowest mass exoplanet ever discovered, and now the closest known. This is a major step forward in detecting Earth twins. Unfortunately, the planet orbits so close to its parent star (0.04 AU) that its surface temperature is estimated to be approximately 1500 degrees Kelvin, so the chance of the planet supporting any kind of life is doubtful. But, the precision required to obtain this result would also allow astronomers to detect a planet four times the mass of Earth in the habitable zone of a Sun-like star (habitable super-Earths) with periods in the range of 200 days.

"This is the first planet with a mass similar to Earth ever found around a star like the Sun. Its orbit is very close to its star and it must be much too hot for life as we know it," adds Stephane Udry (Geneva Observatory), a co-author of the paper and member of the team, "but it may well be just one planet in a system of several. Our other HARPS results, and new findings from Kepler, both show clearly that the majority of low-mass planets are found in such systems."

The Kepler mission has found 2300 candidate planets by searching for exoplanet transits among the 10,000 or more stars it monitors continuously. The majority of planet candidates detected by this transit method are very distant from us. In contrast, the planets found by HARPS are around stars close to the Sun, this new discovery being the closest yet. This makes them better targets for many kinds of additional follow-up observations such as characterizing the planet's atmosphere.

Astronomers will now continue with extensive Doppler monitoring of Alpha Centauri B to try to detect additional planets, perhaps some in the habitable zone. This will become increasingly difficult as the separation between the Alpha Cen binary is decreasing over the next several years. They may also try to observe it from space to see if they can detect the transit of the star across the face of Alpha Cen B. The eclipse will be too shallow to observe from the ground. There is about a 10% chance of success, with the odds being higher if the orbital plane is in line with the binary plane, estimated at 11% inclination with respect to Earth.

How does this fit into variable star science?

The study of variable stars is really the study of the secret lives of stars. How are they formed, how they live out their lives and what changes occur internally and externally as they evolve. We learn about the environments surrounding them, including planets and other companions, and their affect on these partners; and finally, how they end their lives slowly fading away, stripped of their atmospheres or violently exploding, seeding the universe with the materials to build more stars, planets and us.

At almost every phase in a star’s life it varies in its light output. If the variation is large enough and occurs on human timescales, we, the observers of the AAVSO, can record and study these changes, and we have now for over 100 years.

In that time we have learned about all kinds of variations in stellar output and how to interpret it. Some stars vary as they pulsate, actually changing size physically, growing and then shrinking again, sometimes with a precise period, sometimes irregularly. We’ve seen stars that appear to vary because star spots are transported across the face of the star as it rotates. We’ve witnessed stars being eclipsed by unseen companions in extremely close orbits around their center of gravity, and now we can see the incredibly small changes in the light of a star as a planet crosses in front of it from our point of view.

Alpha Centauri B exhibits all of these phenomena at the same time. It rotates, it pulsates, it has spots, it’s a member of a binary system, and now we know it has a planet, perhaps several, and there is a chance we can see them transit the face of our close stellar neighbor if we turn our satellites on them. It is becoming apparent that the more we look, the more we will find planets around stars everywhere. It has also become obvious that the closer we look, the more we will find every star is a variable star to one degree or another at one time or another in its life. Alpha Centauri B is another interesting and exciting member of the variable star zoo