RS CNC (RA 09 10 38.80 DEC +30 57 47.3) is a bright (5.33 to 6.94 V), oxygen rich (M6S), semi-regular (SRb), asymptotic giant branch (AGB) star, which has recently undergone a thermal pulse with dredge up. Due to its evolutionary state, relative closeness, and interesting circumstellar envelope (CSE), the star is of interest to several researchers. RS CNC is included in the AAVSO Legacy LPV program and the Binocular Program. The earliest observation for this star in the AAVSO database (AID) was made in January 1921. The database currently holds 18,477 observations from 521 different observers. Almost all of the observations (>93%) are visual. 1170 (6.3%) of the observations are in Johnson V. No color photometry exists in the AID with the second most popular filter being Tri-color green with 14 observations. Michel Dumont (DMO) currently holds the record for most observations of this star with almost 1,300 dating back to 1982. Warren Morrison (MOW), who has been observing the star since 1981 is in second with 1,035 observations. Edward Oravek (OV) is in third place recording 1,003 observations from 1947 to 2002.

VSX lists RS CNC’s period as 242.2 days. Different papers cite different periods, which isn’t surprising since part of the definition of a SRb star is one with poorly defined periodicity. The period is further complicated by the fact that this star is likely multi-periodic with complex variations on time scales of 50 - 100 days to up to 200 days (Percy, Wilson, & Henry, 2001). This is supported by Libert et al. (2010) who found evidence of a 130 day period and a 250 day period and Hoai et al (2018) who reported a 128 day and a 248 day period. Adelman & Dennis (2005) similarly found periods of 122 and 248 days and found the passbands to be in phase when conducting their IBRV photometry. I was unable to create clear phase plots with limited scatter in VStar with any of these periods. A DCDFT scan on the visual data in VStar gave the strongest hits for a 239.2 day and 240.6 day period, which agrees with the long periods cited in literature. Again, these periods produced noisy phase plots which can be attributed to irregular periodicity.  This is to be expected from a SRb classified star.

Below is all the visual and Johnson V data for RS CNC.

Below is only the Johnson V data:

Below is the past 2000 days of visual data with a 20-day binned means trend line. Besides irregular periodicity, the amplitude also is not consistent from cycle to cycle.

RS CNC is currently losing mass at a rate of about 10-7 solar masses per year as cited by several of the references below. In solar system terms, this is approximately equivalent to losing 60% of Mercury or 1.5 Plutos every year. Observers who have been religiously following the star since 1987 have witnessed it cumulatively lose an Earth mass. Studying the history of mass loss during a star’s AGB phase is key to understanding the stellar evolution and dust replacement of the interstellar medium (ISM). Mathews & Reid (2007) found this mass loss is asymmetric. Several recent studies have tried to understand the nature of this asymmetry.

Libert et al (2010) found that RS CNC’s mass loss probably started about 20,000 to 30,000 years ago, about the same time of Earth’s last ice age. The star has undergone approximately 20 thermal pulses, 10 of which included dredge up. Dredge up occurs when the convective layers carry fusion products up to the star’s outer layers and they can be observed in the star’s spectrum. Le Berte et al. (2016) found evidence of technetium lines in the spectrum and a high carbon-12 to carbon-13 ratio, confirming the star is currently undergoing an AGB thermal pulse dredge up.  Libert et al (2010) found RS CNC probably had an initial (zero-age main sequence) mass of 1.5 solar masses and now has about 1.2 solar masses. They mapped the star in H1 (21 cm) and found a trail of gas in the opposite direction of the star’s proper motion. Their data is shown below. Mathews (2010) and Diep et al (2015) both found the H1 (21 cm) tail is about 6 arcmin long. Diep et al’s 2015 study of evolved stars with circumstellar envelopes (CSEs) found that X HER and Mira were the only other stars with such tails. 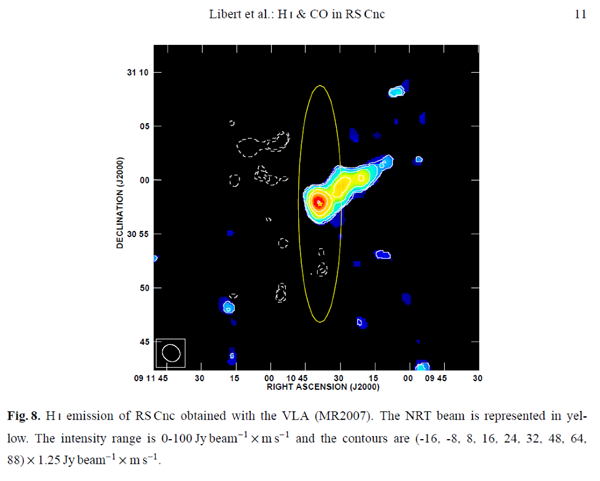 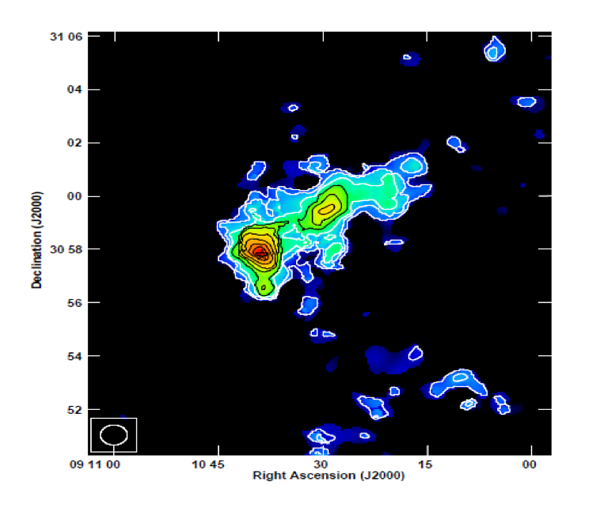 RS CNC’s carbon monoxide (CO) absorption lines, CO (1-0) and CO (2-1), have been the subject of several studies. CO lines are used as an AGB stellar wind tracer because CO originates in the stellar atmosphere and survives up to a few 1016 to 107 cm where it gets destroyed by UV photons (Le Berte et al, 2016) and (Diep et al, 2015). Nhung et al (2018) notes RS CNC is one of the best targets to study mass loss and CSEs due to the star’s proximity (about 140 parsecs). They found the CO lines indicate 2 regimes of mass-loss and velocity and that the star is possibly in the early stage of developing the axial symmetry that leads to bipolar flow. These results are similar to the two wind velocities found by Libert et al (2010) of 2 km/s and 8 km/s.

The physics behind the breaking of spherical symmetry and the process which dictate the irregular shapes of circumstellar and planetary nebula envelopes is a subject of active research. Nhung et al (2018) have been using both RS CNC and EP AQR to develop such models using the parameters found in the papers mentioned above. However, Libert et al (2018) describes the need for better wind tracers than CO. As mentioned before, CO molecules dissociate about 1017 cm from the stellar envelope, so it cannot be used for the extended envelopes. The detached circumstellar envelopes can take several million years to form and extend out more than a parsec from the central star. Libert et al (2018) tried both SiO (3 mm) and OH (18 cm). as tracers. DeVicente et al (2018) also used SiO. They found an equatorial slowly expanding disk and a bipolar low collimation outflow.

In summary, this is an interesting star worthy of further study and continued monitoring by AAVSO observers. Adding multi-band color photometry to the AAVSO database is recommended. I recently submitted a proposal to the Bright Star Monitoring section to conduct BVRI photometry, which was accepted. I personally have never visually observed this star and think it would be a challenge to do so with a telescope. The star has plenty of suitable comps, but they’re all 3-4 degrees away, so a large FOV is required, which makes this a good binocular target. The effective temperature of this star is between 3100 and 3200 K, so it should be a light orange and not be too red to cause issues for visual observers.