CT Lacertae (CT Lac) is a SRB type Long Period Variable (LPV) that has @1200 observations Visual and CCD  B, R, R and Ic bands in the AAVSO International Database (AID).

The General Catalogue of Variable Stars (GCVS) defines the SRB LPV class as:

“Semiregular late-type (M, C, S or Me, Ce, Se) giants with poorly defined periodicity (mean cycles in the range of 20 to 2300 days) or with alternating intervals of periodic and slow irregular changes, and even with light constancy intervals. Every star of this type may usually be assigned a certain mean period (cycle), which is the value given in the Catalogue. In a number of cases, the simultaneous presence of two or more periods of light variation is observed.”  CT Lac does seem to show two periods.

From Wikipedia “A carbon star is a late-type star similar to a red giant (or occasionally to a red dwarf) whose atmosphere contains more carbon than oxygen; the two elements combine in the upper layers of the star, forming carbon monoxide, which consumes all the oxygen in the atmosphere, leaving carbon atoms free to form other carbon compounds, giving the star a "sooty" atmosphere and a strikingly ruby red appearance.”  It's this dark red appearance that should make this star a pleasure to visually observe!

It appears that CT Lac has a significant amount of carbon dust absorption.

VSX has CT Lac’s primary period as 558.2 days with a secondary period of 286.3 days (almost half of it’s primary period).  (I have also seen 562 days for CT Lac’s period but this value has appeared to have been refined by Templeton et al).  This is a long period for a LPV but not unusual for a Carbon star.

It's Magnitude Range is typically 8.6 – 13.4 in Visual and V band.  This makes it particularly well suited for Visual observers and work in B, V, R and Ic for CCD observers. 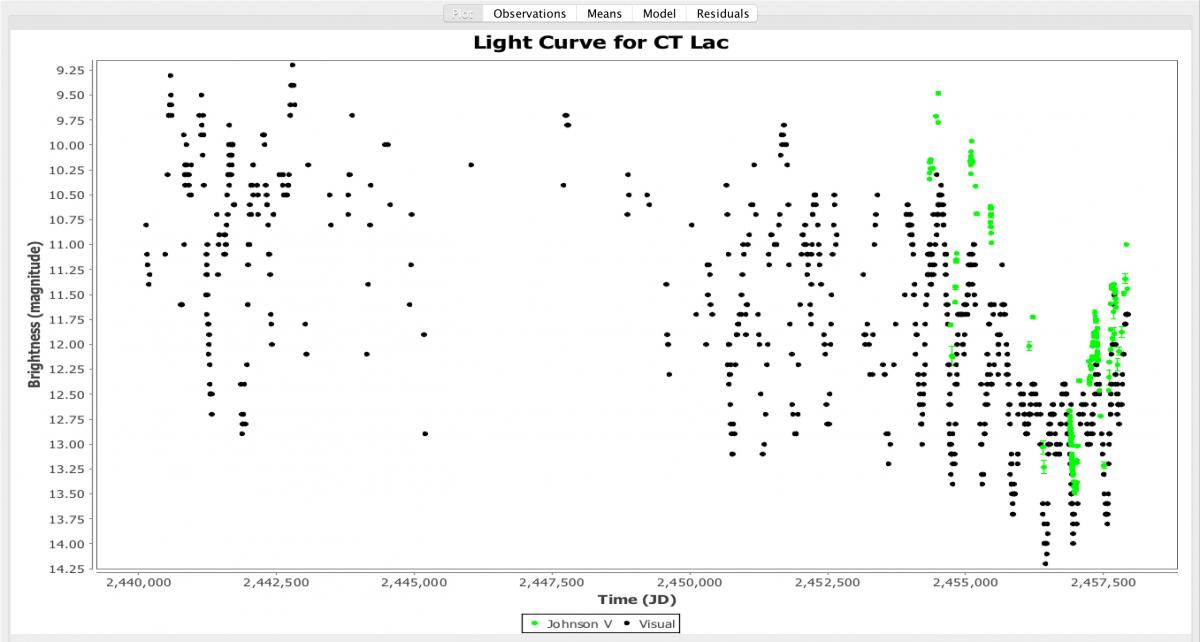 This is the full Light Curve (LC)  graph for all of the Visual and V band observations in the AID which clearly shows the “dimming” event CT Lac is currently going though.  There may have been another dimming event in the past but there is not enough data in the AID to make a judgement about this having happened. 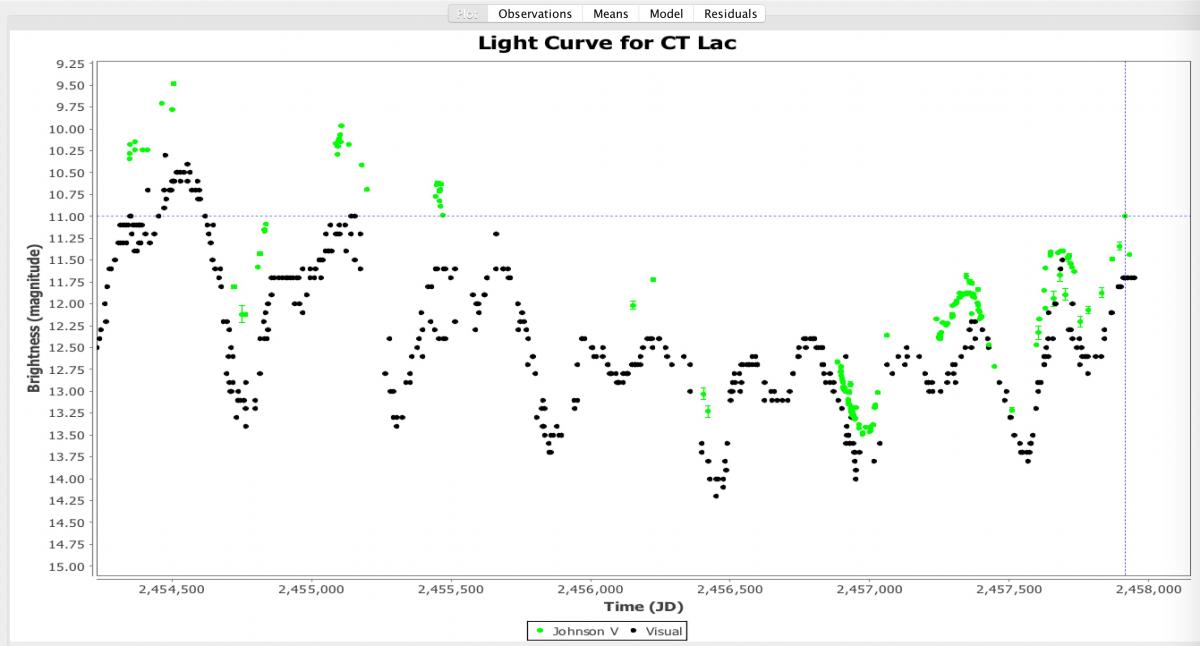 Closer look at the dimming event

Just before the latest dimming event started, the magnitude of  CT Lac at Maxima was at 10.5 in Visual on March 2008 .  Later that year CT Lac minima was 13.4 in Visual.

CT Lac’s Minima and Maxima magnitudes appear to be climbing back toward the values it showed for 2008 and earlier however they have not fully recovered as of the date this article was written.  In the V band the differences appear to be even greater.

The length of the time of this dimming event is @3340 days or @9 years and the star may not have completely recovered yet, Perhaps it’s LC will continue to “fall apart” as T Umi is currently doing.  (Please see my “July 2016 LPV of the Month” T Umi article for more detail.)

Cyclical dimming behavior is seen in some other Carbon and semi-regular stars RU Vir and V Hya.  It’s felt these dimming events may be caused by dust and soot the star is throwing off or events dragging more up from lower in the star or for some unknown reason.

In my article on October 2016 LPV of the Month article on S Cep, I mention that S Cep is also a “carbon” star and has had a number of dimming events over time and at time has showed hints of Dual-Maxima (DM).

Dimming may have be caused high mass loss that may become optical obscured (dim) the star for at least a period of time.  Further observations over time are need to see if this pattern repeats in the future.

There may have been earlier dimming events for this star but there isn’t enough data in the AID for me to see an earlier event.  Observations will be needed in the future to determine is this is a cyclical event 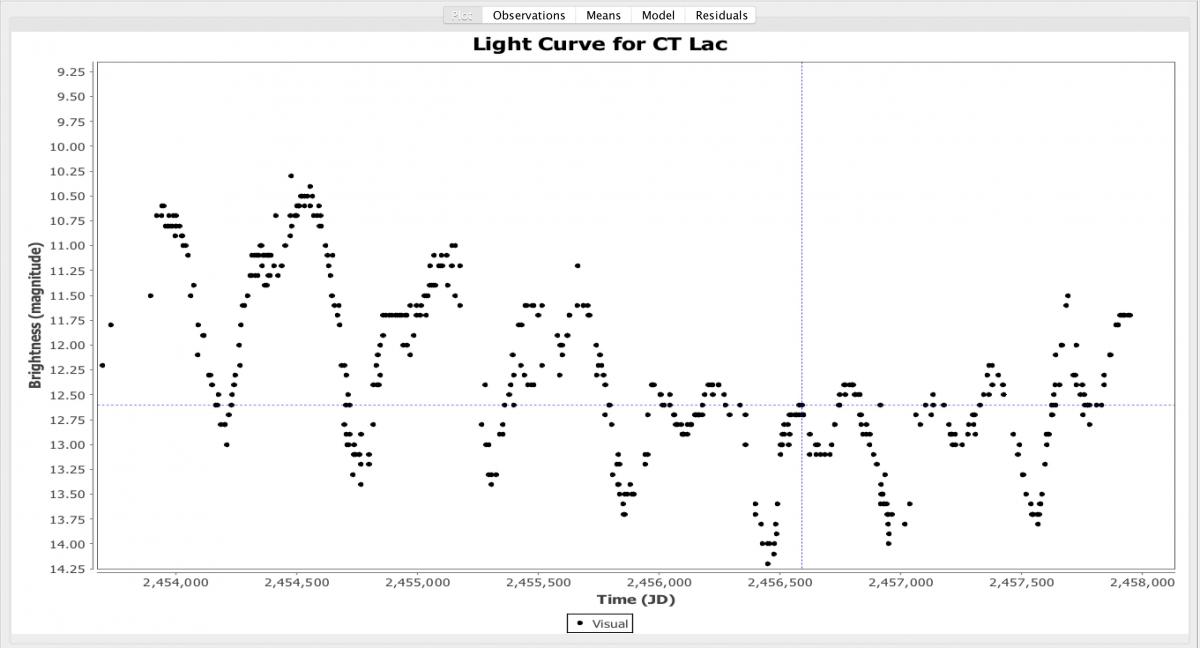 This light curve shows the visual data for CT LAC for the last 11.5 years and clearly shows the Dual or Double Maxima (DM) behavior of this star.  Although this behavior is not as clear to me earlier in it’s Light Curve (LC), CT Lac’s DM was reported around 1980.

This star is well placed for many visual observer, many of whom have tracked this star and given us the wonderful LC curve above showing both the dimming of the star and it’s Dual-Maxima (DM) behavior.

Matthew et al in his paper also made the following point about doing CCD observing of this star, “Instrumental data would provide additional useful information, especially if Johnson B and V data were taken and properly transformed so that both the overall V-band brightness and the (B−V) color could be accurately tracked with time.”  This would help determine the nature of the DM seen in the star along with the “dimming” event along with Ic band images if possible to help separate the two portions of the Dual-Maxima feature.

CT Lac may be one of the stars that helps us understand the evolution of LPV stars and should have Visual of CCD observation for many years to help unfold more of it’s secrets.

For further details about CT Lac and where I pulled my inspiration for this article, please read the follow paper by Matthew Templeton, et al