R Aur is a bright large amplitude Mira that has been well observed by the AAVSO over a considerable time period.  Over 30,000 observations are in the AID with the first observations made back in 1865.  Over 1,000 different observers have contributed to the light curve shown below which displays all observations in he AID.  It is one of the Legacy LPV Program stars.

It's spectral class is M6.5e to M9.5e according to the VSX and it's interesting to note that it's spectra was first measured in 1890 by Rev. T. E. Espin.

The GCVS lists R Aur as having a visual magnitude range of 6.7 to 13.9 with a period of 457.5 days.  This places R Aur in a large group of Miras with a long period (>350 days) which do generally show some interesting light curve characteristics.

R Aur is contained in the list of LPV Humps maintained by Frank Schorr.  It shows a hump in the ascending branch of the light curve.  This can clearly be seen in the phase diagram and the light curve over the past 2,000 days as shown below.

Marsakova and Andronov (2007) analysed a selected group of LPV's which show hump features in their light curves based on 80 year's worth of data from the VSOLJ and AFOEV (not sure why they didn’t use AAVSO data!) and R Aur was one of the stars analysed in greater detail.  They found that, as with many other LPV's with humps, the humps don’t occur in every cycle.  For R Aur, they found that it occurred on average about every second cycle (45 cycles in 100 to be more precise).

They also found that the average duration of the hump was 30 days which represents about 6.6% of the total period.  The average phase of the cycle where the hump appeared was 0.25 which is evident in the phase diagram above.

Numerous papers provide possible explanations for the humps observed on long period Miras.   These include:

I'm not sure there is a consensus yet which makes these Miras an important subgroup to follow.

Miyata et al (2000) observed a number M Mira variables with a mid-infrared spectrometer which included R Aur. They found that the observed spectra can be reproduced by a linear combination of the stellar continuum and two dust components quite well. This indicates the existence of two kinds of dust grains around M Mira variables such as R Aur. One component is the 10 micron feature, and its carrier is attributed to the amorphous silicate. The other component is the 11 micron feature that they identified as a kind of amorphous alumina.

An analysis has been performed to ascertain any period changes in R Aur over the past 150 years based on observations in the AAVSO AID.  The figure below suggests that there has been a "meandering" of the period between the range of 450 to 465 days.  The WWZ analysis performed produces almost exactly the same period diagram as developed by Karlsson et al.  This slow meandering behaviour is relatively common in the longer period Miras. 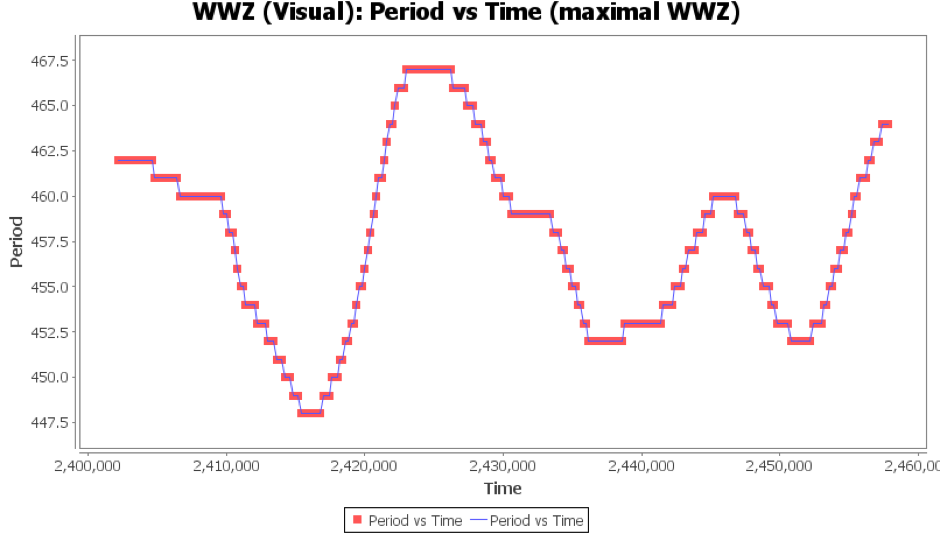 R Aur is an interesting LPV to follow so all are encouraged to maintain the coverage that the AAVSO has facilitated for over 100 years.