This month's Long Period Variable (LPV) should be a treat for visual observers. RU Vir is a very dark red “Carbon Star.”  From Wikipedia “A carbon star is a late-type star similar to a red giant (or occasionally to a red dwarf) whose atmosphere contains more carbon than oxygen; the two elements combine in the upper layers of the star, forming carbon monoxide, which consumes all the oxygen in the atmosphere, leaving carbon atoms free to form other carbon compounds, giving the star a "sooty" atmosphere and a strikingly ruby red appearance.”  It's this dark red appearance that should make this star a pleasure to visually observe!

RU Vir is an M (MIRA) type variable of Spectral type C8,1e(R3ep) with the “C8” denoting a very carbon enriched spectrum.  It's Magnitude Range is 8.1 - 14.2 in Visual and V band.  This makes it particularly well suited for Visual observers and work in B, R and Ic for CCD observers.

VSX shows the average Maxima and Minima for RU Vir as 8.1 - 14.2 in Visual and Vmag but as will be discussed later in this article these values can vary considerable over time.  This makes the star good for visual observers with a small telescope and within the range of many CCD observers in B, V, Rc and Ic bands. 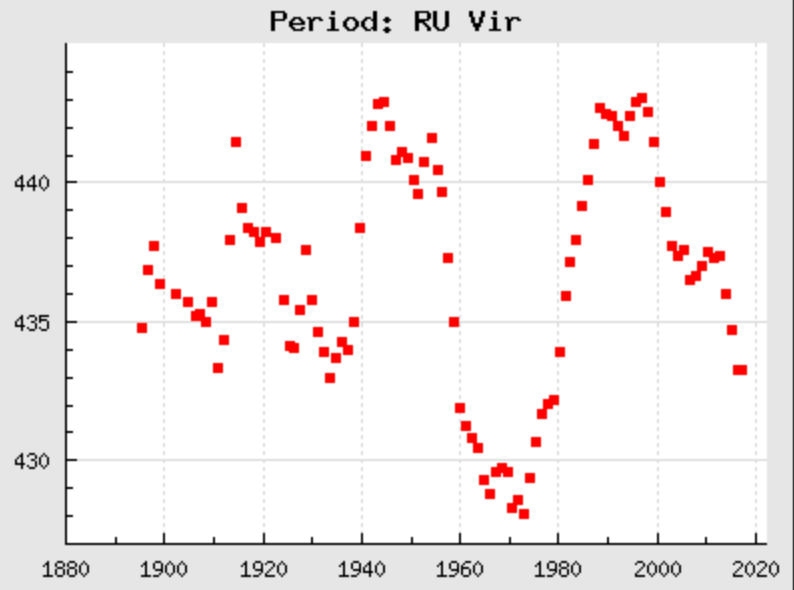 The above is a period graph for RU Vir from Thomas Karlsson's monumental work of the O/C, Period and Mean Lightcurves of around 490 Mira variable stars.  The main webpage of his study can be found at http://var.astronet.se/mirainfooc.php.

VSX reports that RU Vir's period 434 days however it has swung back and forth between @427 days @443 days since before 1900.  It does not show any long term trends of lengthening or shortening but almost shows a sine wave.

The first observation for Ru Vir in the AAVSO International Database (AID) is from June 28, 1904, although it was observed before this time.  It has been monitored steadily until the present and currently has over 8,700 observations reported in the AID.  RU Vir is currently on the AAVSO LPV “program”  star list and John Percy’s Peculiar star list.  Both lists are available at the “LPV Section File Downloads.”

First observation for RU Vir in the AID 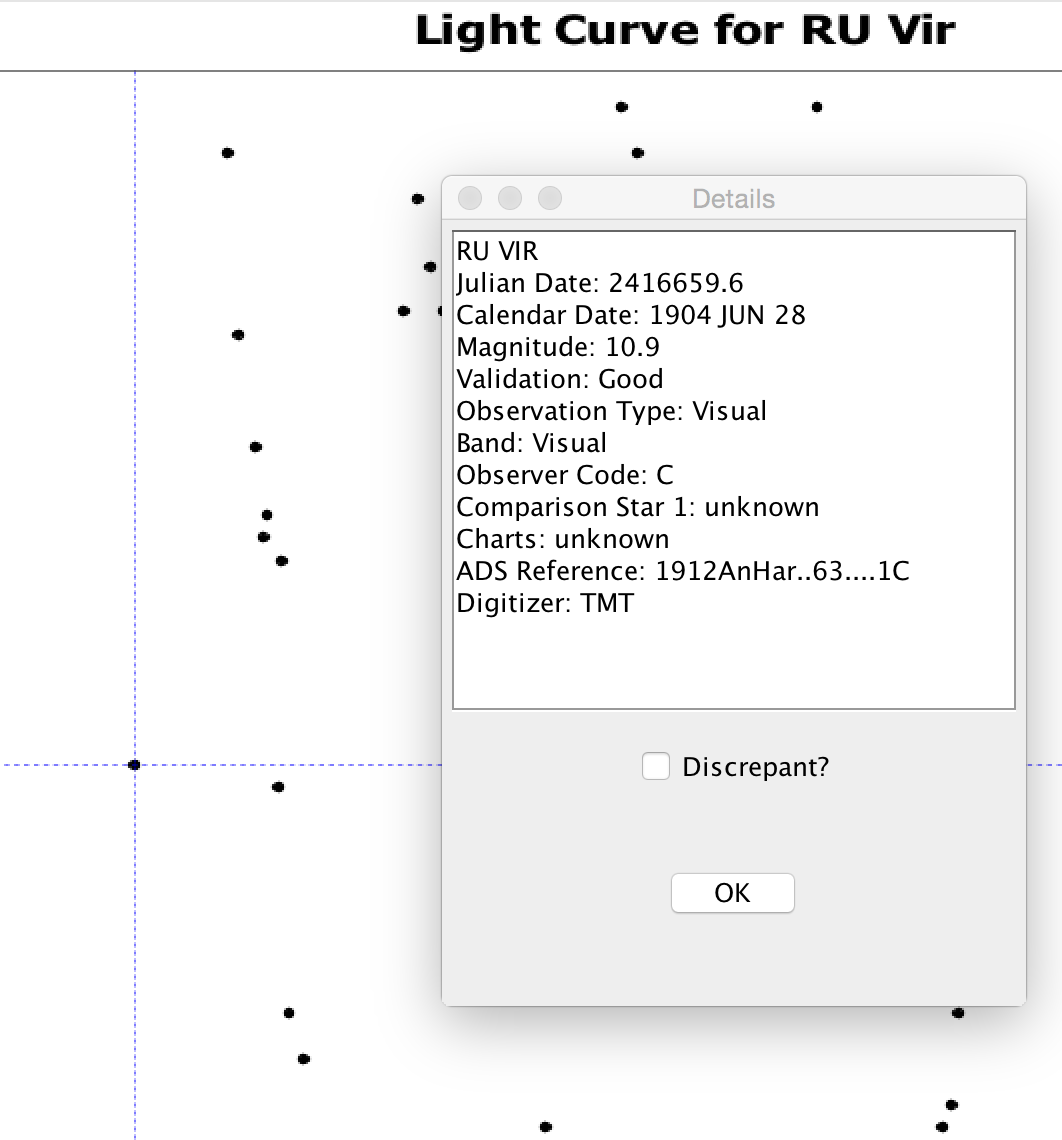 The first entry in AID (AAVSO International Database) for RU Vir comes from an observation done on June 28, 1904 (JD2416659.6), by Observer “C”, Leon Campbell.  In 1899 Leon went to work for the Harvard Observatory but his real passion was for observing variable stars. In 1910 Leon visited William Tyler Olcott at his home to instruct Mr. Olcott in the art of variable star observing.   A year later Mr. Olcott was instrumental in forming the AAVSO.

Leon Campbell was elected President of the AAVSO in 1919 and several years later he served as Recorder of Observations for the AAVSO and continued in that position until his retirement in the 1940s. (The title was later changed to Director of the AAVSO.)  Leon was known for being a liaison between professional astronomer and interested amateurs.

At the time that this observation was made, each observer only had to use the first initial of their last name.   Things have changed a lot since! 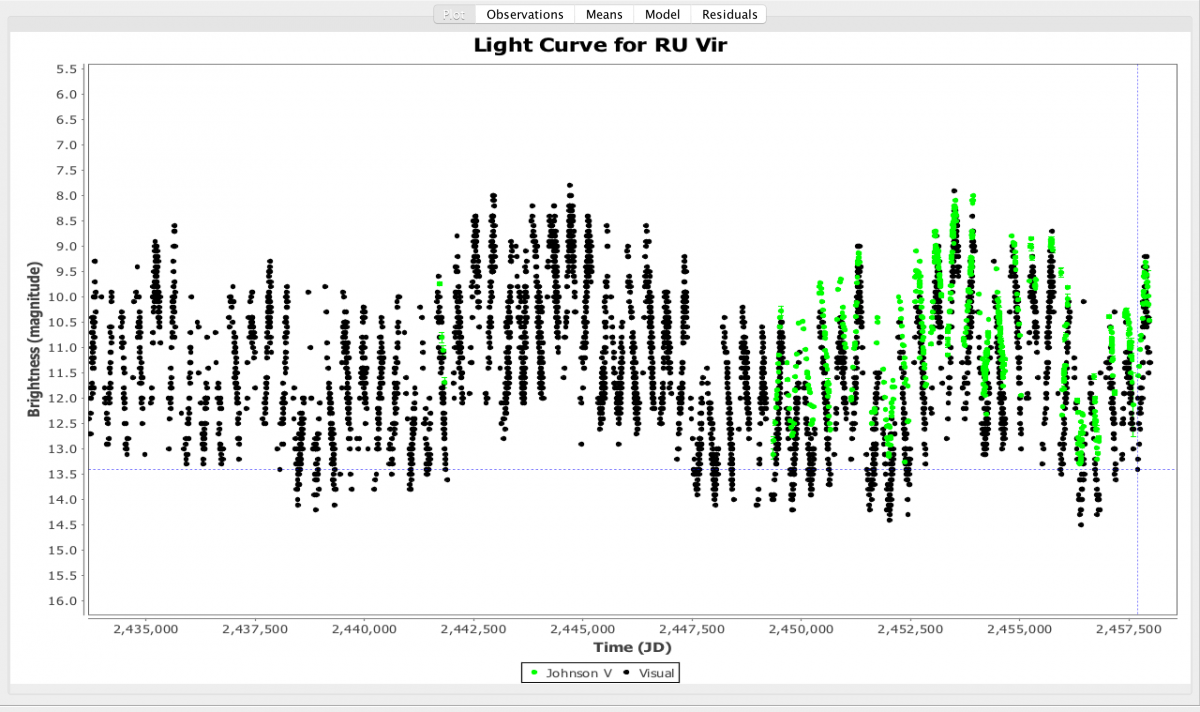 One of the curiosities of the Light Curve (LC) of Ru Vir is the changes to the Maxima and Minima brightness of the star over the course of 6700 to 11,000 days.  In some cases the difference in maxima from a “bright cycle” to the next much dimmer cycle can be 2 or more magnitude difference.  Some of the cycles have a very bright maxima followed by a very low Maxima embedded in the larger cycle.  It’s possible we are about to have one of these events in the next cycle or two so it’s important to get as many observations as possible in the near future.

For the last 4 or 5 cycles RU Vir’s Maxima has been brightening but it’s next cycle could be substantially dimmer or it might take longer for the maxima to dim.  This will be something to watch for during this coming cycle as it’s season unfurls!  Of course as is common with most LPVs RU Vir’s cycles aren’t always consistent (or obvious).

This behavior has been called “a very long-term, large-amplitude modulation in mean light.”

I’ve observed other “carbon stars” showing this same behavior such as S Aur, R Cmi, S Cep V CrB, R For, R Hya, R Lep, SS Vir, CT Lac, TT Cen and others, some of which already have LPV of the Month articles written about them.  Perhaps there is something special about “carbon” stars that cause this phenomena, maybe even dust clouds caused by internal events that eject these clouds on a semi-regular  basis.  Of course not all “carbon” stars show this behavior either!

As Dr. Matthew Templeton mentions in his article https://www.aavso.org/vsots_ruvir

“Since red giants and AGB stars have fully convective envelopes (where heat is transported mechanically by hot gas rising upwards against gravity), some of this processed material can reach the surface of the star, where it becomes visible in the star's spectrum.”

“Pulsating AGB stars such as Mira variables undergo fusion in alternating hydrogen and helium shells, which produces periodic deep convection known as dredge-ups. These dredge-ups bring carbon from the helium burning shell to the surface and would result in a carbon star.”

“For stars having masses between 1.5 and 5 M☉ (Solar masses),  it is thought that the ‘dredge-up’ events that occur on the AGB can mix some of the carbon deep inside the star into the envelope, creating a "carbon star". Carbon and its various compounds have very strong absorption in the optical, and give carbon stars their distinctive reddish color.”

Matthew goes on to say:

These stars are approaching the very end of their life as a star before becoming a glowing white dwarf star.

In further reading it appears that “carbon” stars may also be shedding mass at a greater rate as they near the end of their life and may be a major contributor of carbon in galaxies.

Mira Variables and LPVs in general may go through spectrum sequence M-MS-S-SC-C  as a natural progression as they age but much is not known about this stars and further observations are needed particularly in visual and the BVRc and Ic color bands by AAVSO astronomers.