I know what you are thinking, and I totally agree, this isn’t the time of year when you think about Lyra. When I think about Lyra, my memories revolve around showing people the Ring Nebula during early fall outreach events while explaining how stars die. However, S Lyrae is still a viable target this time of year, although it will likely have to be first on the agenda and the window of opportunities is closing fast. So why am I writing about a variable in Lyra for December? At a recent AAVSO Observing Section leader meeting, David Cowell of the Bright Star Monitor (BSM) Section suggested doing an LPV project since the BSM is well suited for LPV observations. I agreed. My thought was to initiate BSM coverage on stars from Percy’s List of Pulsating Red Giants Exhibiting Unusual Behavior (found here: https://www.aavso.org/sites/default/files/images/The%20Percy%20List_1.pdf) that are not currently receiving adequate photometric coverage. About half of the stars on the list met my criteria and I submitted a proposal. After uploading data from the first images on S Lyr, I saw this: 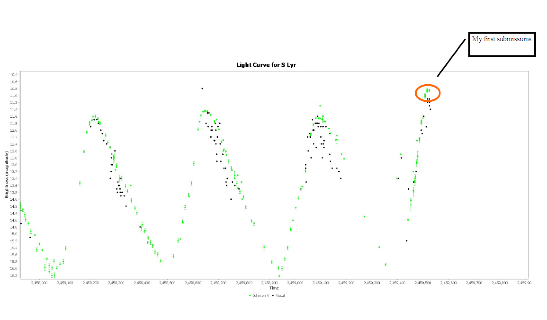 S Lyr was about 0.8 V magnitudes brighter than the last couple cycles. This piqued my interest. Was the photometry bad or was something else going on? Well, the star is on the Percy List for a reason; it is not a well-behaved star. Percy notes in his list that S Lyrae’s “mean and maximum magnitude vary by 2 mags.” So, let’s look at some longer term trends. 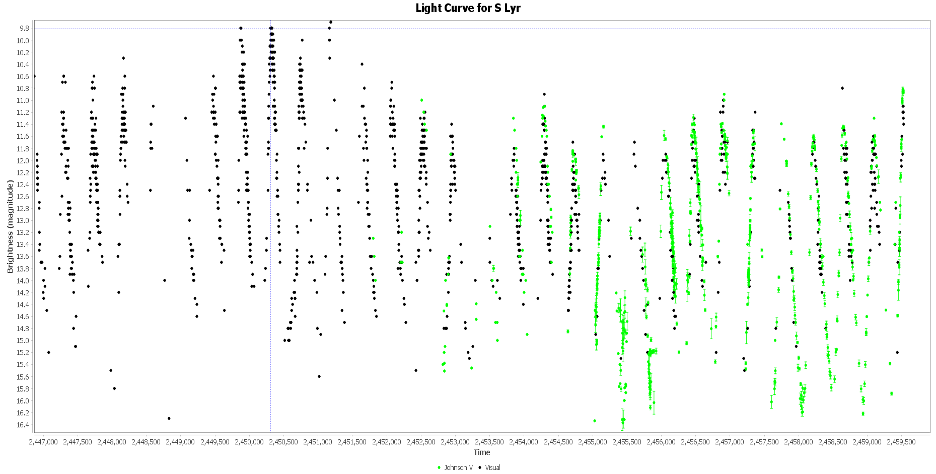 Clearly, the star is brighter than it has been recently, but it is not historically bright. S Lyrae reached a visual magnitude of 9.8 several times in the mid to late 90s and the maximum brightness clearly oscillates. Below is all the visual and Johnson V data in the AID.

Please note that based on simply looking at the light curve, the minimums seem to be deeper now than in the past; however, there may be more to that than can be determined by just visually inspecting the light curve.

This graph is shows how semi-amplitude of the star has changed over time. The amplitude changes appear to have been more dramatic in the past than now, which is something for us to keep an eye on.

S Lyr is an LPV program star with a total of 6,762 observations in the AID as of November 22nd, 2021. This is less than most program stars. With most LPV program stars, typically more than 90% of the observations are visual. The observation type distribution for S Lyrae is very different than for most other stars that I write about because only 54.9% (3,712) of the total observations are visual. This may lead you to think that a lot of photometry is being performed on this star, but that really isn’t the case either. The first photometric observation was made on this star in September of 2000, and 644 (~9.5% of the total observations) Johnson V observations have been made since. Fainter-than observations (1,865 or 27.4%) make up the second most-reported observation type. One fainter-than observation gets made for every two visual observations with a recorded magnitude estimate. So why is this important? Go back and look at the longer trend light curves. S Lyrae gets very faint, clearly getting too faint for many visual observers. We probably weren’t really able to get good records on the minimums until 20 years ago when photometrists came into the picture and were able to measure faint enough to record the minimums consistently.

S Lyrae is better behaved in terms of the star’s period. VSX listed the period at 438.4 days,

and this period is consistently quoted in literature. The following is a 438.4-day phase plot for the visual

Based on the phase plot, this looks to be a very reasonable period. Nothing in this phase plot would make me think the star may be multi-periodic, and Fourier analysis confirms that only one period is present. Looking at the phase plot for just the Johnson V data (which again started late in the year 2000), you can see definite cycle-to-cycle changes in the minimum, something you don’t see in the visual data due to the faintness of the star.

Although the 438.4-day period appears to be fairly strong, there is cycle-to-cycle variation in the period over time, and 438.4 is the mean. This is a fairly common attribute of Mira stars, where the period can meander as much as 5% from the average period. In the last 125 years, S Lyrae’s period has varied between 432 and 443 days, or +/- 1.2% from the mean.

Spectroscopically, S Lyrae is an interesting star. VSX lists the star’s spectra type as SCe. How rare are SC-type stars? If you query VSX for a SC% spectral type, you will get a total of 18 stars. This is it: this is the list: 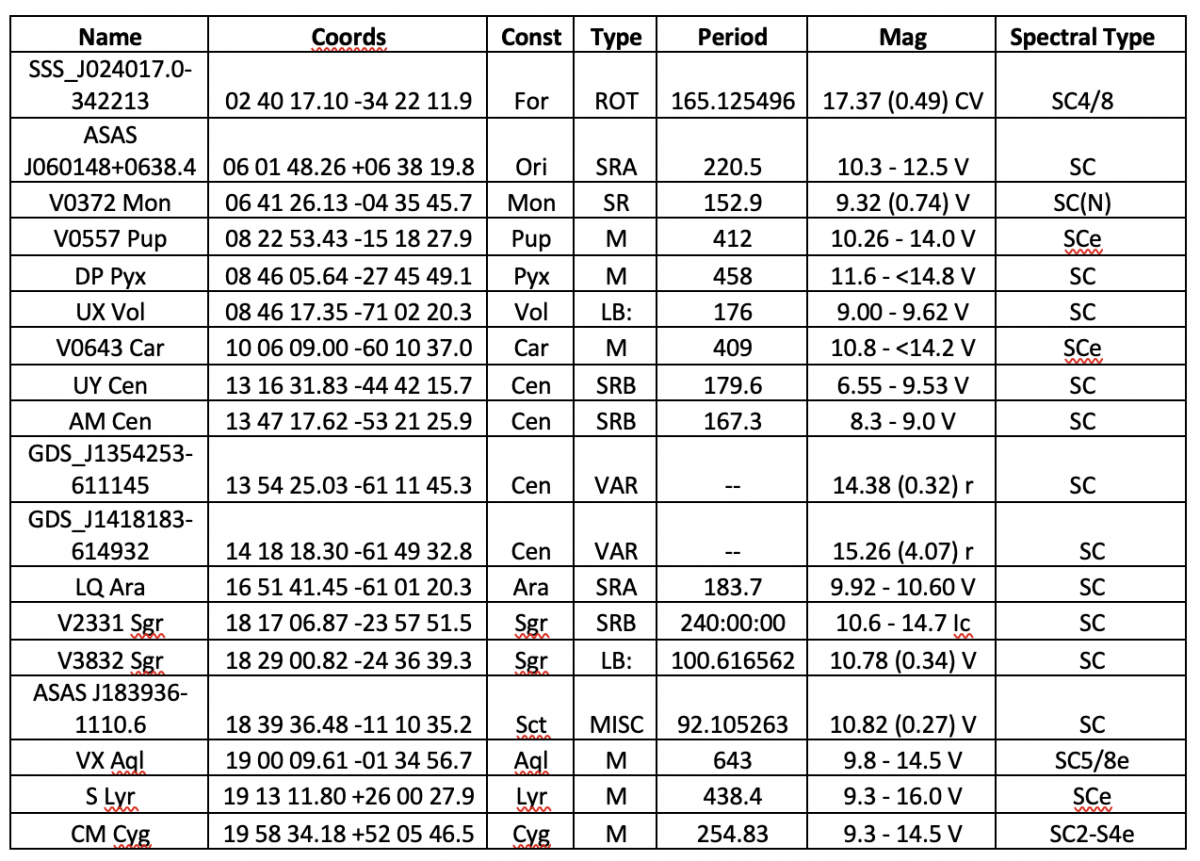 So, what is an SC-type star? Mira stars are sub-divided by their carbon-to-oxygen (C/O) ratios, and are generally believed to follow an evolutionary sequence of M  MS  S  SC  C. M-type (oxygen). Miras have C/O ratios <1, S-type equal to 1, and C-type (carbon stars) have a C/O > 1. The MS and SC types are intermediate steps which can be determined spectroscopically. Zirconium has a stronger affinity for oxygen than titanium, and Zirconium increases in abundance, along with carbon, as the star ages. By the point when carbon and oxygen are about equal (the S-types), TiO bands weaken considerably from the spectra, and ZrO bands start to dominate. The presence of oxides of other heavy elements, such as yttrium (YO) and vanadium (VO), also accompany the change in spectral type which help to identify the intermediate steps of MS-type and SC-type.

The “e” after the SC in the spectra-type stands for emission because the star has shown silicate emission lines. This caused different interpretations on the actual physical nature of the star, and how it should be classified. Wyoff & Wehinger (1972) used AAVSO data and spectral data from the 84” cassegrain at Kitty Peak to find new bands in noted S-variables R Cyg and S Lyr in order to find comparisons between the two stars. Chen and Wang (2001) argued that S Lyr has strong carbon star characteristics, and could be a new silicate carbon star with a J-type spectrum. (I’ll let you do your own research on J-type carbon stars. I had to Google it.) Ramstedt & Olofsson (2014) performed a study looking at the ratio or carbon 12 and carbon 13 in S-type and C-type stars, and grouped them by their 12C/13C ratios. They found carbon stars had large 12C/13C ratios (~ 30-70), and J-types did not (as low as 4). S Lyr was on the low end for an S-star in regards to the 12C/13C ratio, but not as low as a typical J-star. Consequently, they did not lump S Lyrae in with the other J-stars in their study. Danilovich et al. (2018) looked for sulfur detections in AGB stars, and found CS was consistently detected in carbon stars, but only sporadically detected in S-stars. S Lyr had the highest mass loss rate (~ 3.5x10-6 solar masses/year) for a star with a CS detection but no SiS detections. They concluded S Lyrae is likely a SC-type star. 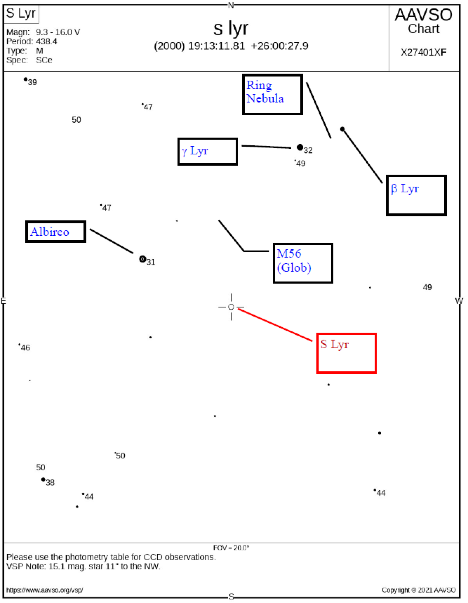 I hope you will join me, and add S Lyr to your observing programs, especially when it is bright and easily accessible to visual observers. If you need to wait until next spring/early summer, I will understand.