T Ursae Minoris (T UMi) is an LPV that has shown a dramatic decrease in both its period and brightness over the last 37 years.  So much so that it is no longer considered a Mira type of LPV but is now classified as a Semi-regular (SR) LPV.

Some astronomers feel this LPV may have gone through Helium Shell Flash in the relatively recent past which in my opinion makes it a great target to help gather more data about what happens to a star after a Helium Shell Flash.

The first observation for T Ursae Minoris (T UMi) in the AAVSO International Database (AID) is from Oct 27, 1904.  It has been monitored steadily until the present and currently has over 16,300 observations reported in the AID.

Until 1979 T UMi's period was about 310 days.  At that time the period decreased suddenly to 274 days and it continues to decrease until today at the highest known rate for an LPV. 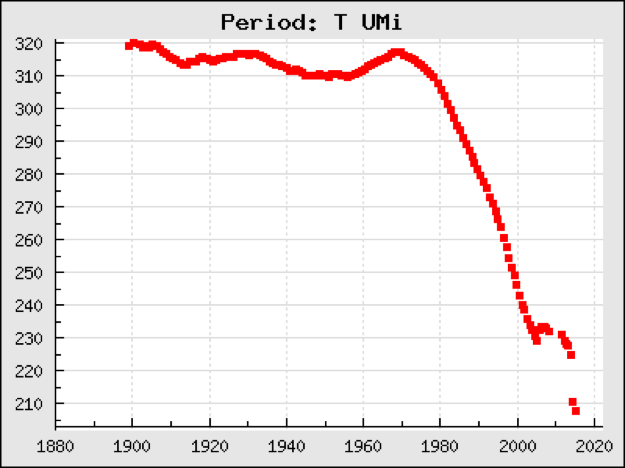 The above is a period graph for T UMi from Thomas Karlsson's monumental work of the O/C, Period and Mean Lightcurves of around 490 Mira variable stars.  The main webpage of his study can be found at http://var.astronet.se/mirainfooc.php.

This period graph clearly shows the rapid decrease in T UMi's  period with an interesting little “hitch” that might need to be looked at closer!

The luminosity of T UMi has also declined as has its average amplitude as seen in the following light curve. 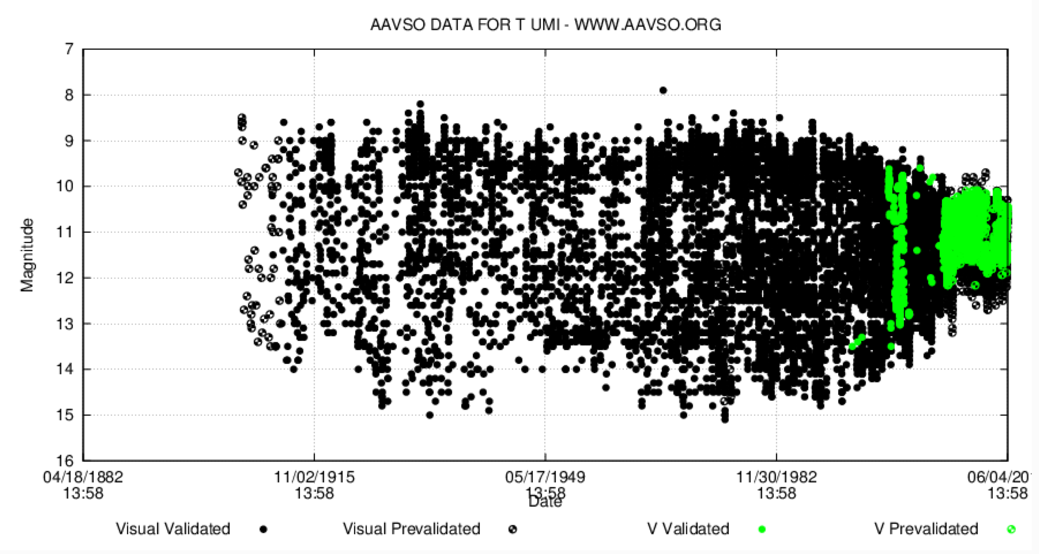 Between the period decrease and decrease in amplitude T UMi is no longer technically classified as a Mira LPV but is now a Semiregular (SR) LPV with a dominant period of 113.6 days.  This period change is currently the largest known for any Mira type LPVs.

It has been suggested that T UMi has just undergone a shell helium flash in the recent past where helium around the dense core of the star reaches a critical mass and ignites.  After this flash the star has to adjust to this release of energy causing many of the characteristics of the star to change including  changes in it's period, amplitude, luminosity and perhaps a secondary period in addition to the primary period.  These changes may last hundreds or thousands of years. 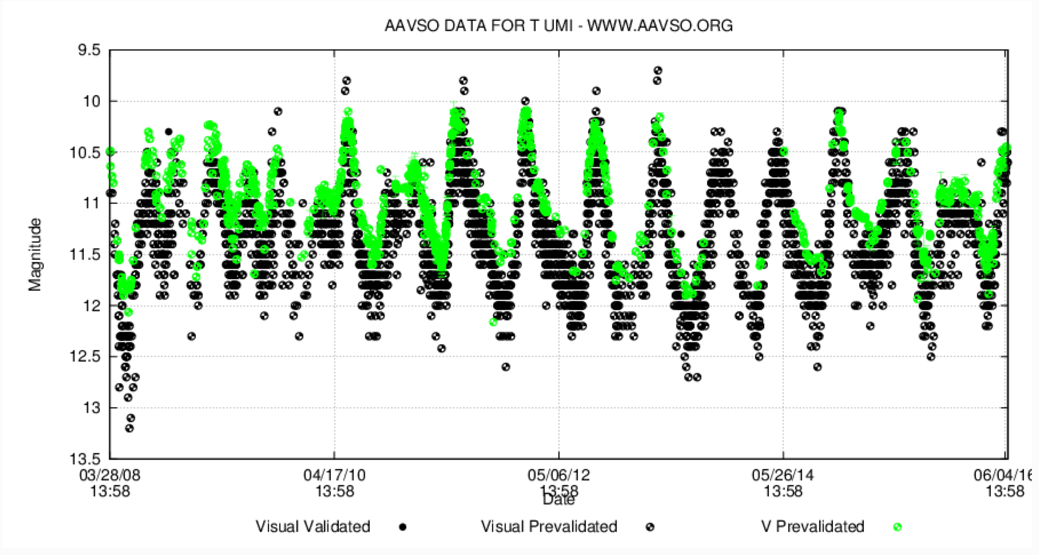 In the Light Curve (LC) above of T UMi for the last 3000 days, you can see how the light curve has become “ragged” for the lack of a better word.  The Maxima on at least two occasions have been truncated or flattened and the star shows other behavior that changed the shape of the light curve that almost look like the beginning of the Dual-Maxima behavior seen in some LPV stars such as BH Cru, R Nor , R Cen and a score of other LPVs.

From what I've read the modeling of the early stages of a thermal pulse is difficult.  T UMi is believed to be at the early phase of a thermal pulse and in my opinion the star should be observed as often as possible for not just the period and brightness changes but also for the evolving change in the shape of the light curve of the star.

It is well placed for “northern” observers and magnitudes for the star's cycle are good for both visual observers with telescope and CCD observers.