The magnitude range for this star in V is 6.55 – 10.1 which makes it a good target for both visual and CCD observers.

During this same time period BH Cru's Spectrum has changed from an SC star to a CS or C (carbon) star.

The first observation for BH Cru in the AAVSO International Database (AID) is from 1969 just after it was discovered.  Currently the AID database has 9360 observations in visual and multi-bands.  Many of the observations have been made by visual observers. 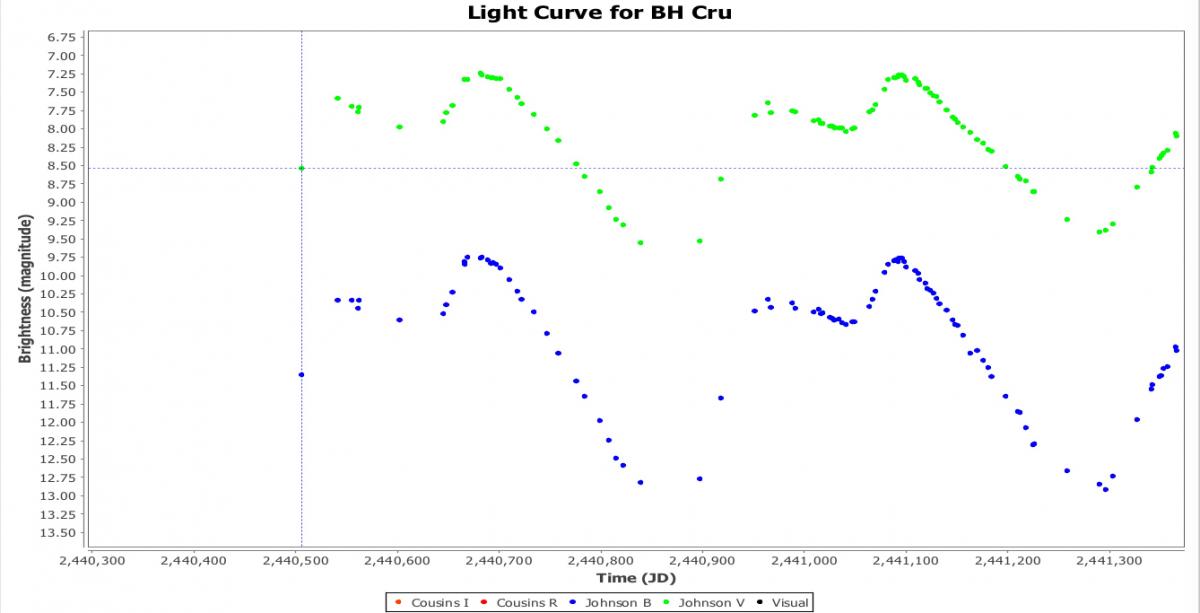 As seen in the light curve (LC) above, BH Cru had a strong Dual-Maxima (DM) for a number of cycles after it was discovered up in 1969 up to about cycle 13.  As the period of BH Cru increased the DM behavior disappeared and today there are only single but noticeable “humps” or “stalls” on the ascending part of the LC.  This same behavior has been seen in star R Cen.  It appears that the “hump” for BH Cru may be derived from the first maxima when the BH Cru showed the Dual-Maxima behavior. 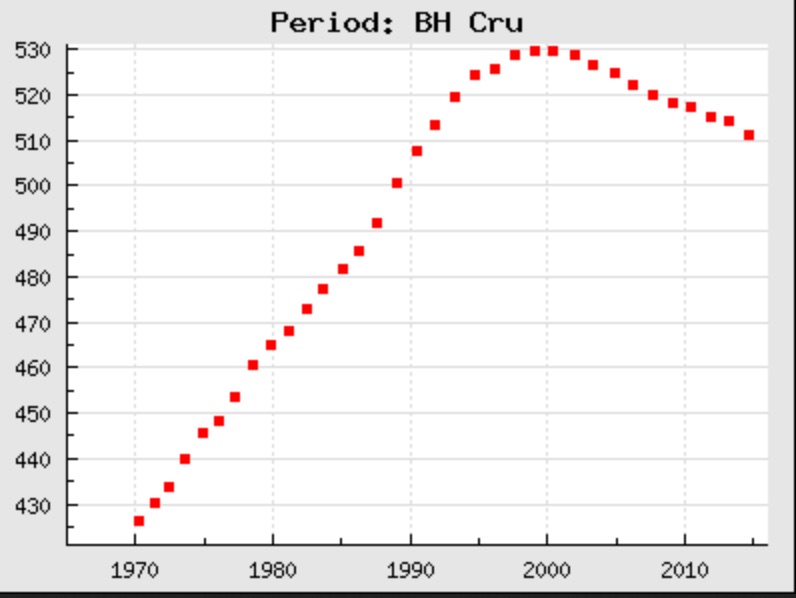 The above is a period graph for BH Cru from Thomas Karlsson's monumental work of the O/C, Period and Mean Lightcurves of around 490 Mira variable stars.  The main webpage of his study can be found at http://var.astronet.se/mirainfooc.php.

This graph shows BH Cru had a period of 421 days when it was discovered in 1969 and steadily increased in period to about 525 days around 1999, an increase of 104 days in only 12 cycles as pointed out by W.S. G. Walker in a paper he wrote on changes in BH Cru.  Since about 2001, BH Cru's period has decreased at a slower rate until it's about 505 days in length today.

This behavior is almost identical to period changes for star LX Cyg which is described in an earlier “LPV of the Month” article and might be worth reading again because of the simularity of these two stars;

When BH Cru was first discovered it's spectral type was measured to be between spectral types SC4.5/8-e and SC7/8-e (showing ZrO bands) which is rare amoung LPVs..  By 2004, BH Cru's spectrum evolved into a CS (Showing weak C2) spectrum and perhaps a C (carbon) spectrum today.  This change occurred during the dramatic period  increase for this BH Cru.  A paper by Zijlstra et al discusses this change in great detail and is certainly worth reading.

BH Cru may have many more surprises for us as time moves on.  It's a good star to add to your observing list if you are a southern observer or have remote access to a telescope that is in the southern skies.  For CCD observers it has been suggested that the observations be made using the B, V, Rc, Ic filter set and U if available.  B and V observations would be the most useful for ongoing projects and be transformed if possible but observations in the other bands/filters are important too.  This star still has a number of unanswered questions about it's behavior!