The LPV program has been an important foundational piece of the AAVSO for many decades. The program consists of 388 long period variables, which have long visual observational histories and high scientific value. Continued monitoring of these stars is vital to identify evolutionary trends in these stars as they rapidly age. Most long period variables reside along the Asymptotic Giant Branch (AGB) of the H-R diagram. These stars are at the final stages of their lives and things happen fast enough that we can observe these changes on human timescales. At present, our historical records for these stars are primarily visual. All-sky photometric surveys are starting to collect a lot of data on these stars, but it will take decades for them to have enough long-term data to uncover these evolutionary trends. So, until this happens, we still need visual observers monitoring these stars to maintain continuity of our records of these important stars. I bring this up because I’m seeing some disturbing trends relating to LPV program stars. 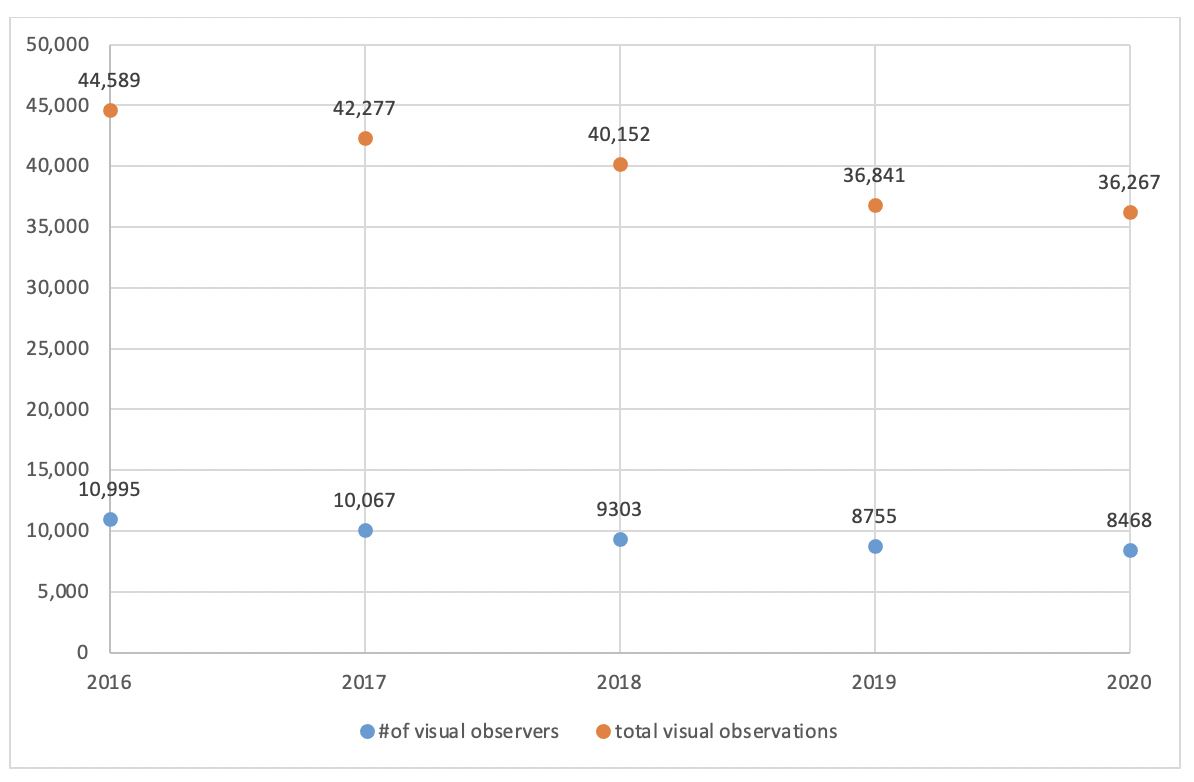 This trend needs to change. Many stars in the program are still being consistently observed, and in some cases, have seen their observation rate increase over the past few years. I’m going to focus on stars who are still decently observed but have experienced greater than normal declines. Observing these forgotten stars can have great impact, and I intend to promote them more often. One such star is RX Boo. 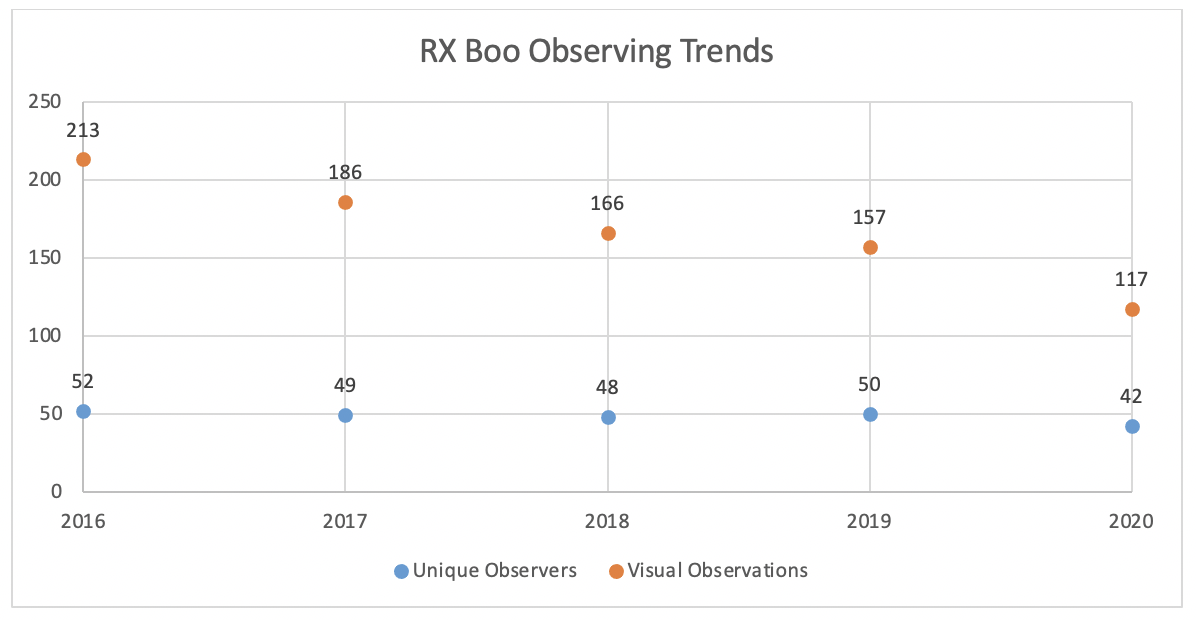 RX Boo is easy to find and bright enough to be observed with binoculars. It lies right between Arcturus and Rho Boo. Well-observed program star R Boo lies just to the northeast, so you can knock out two high-value observations in a short amount of time. 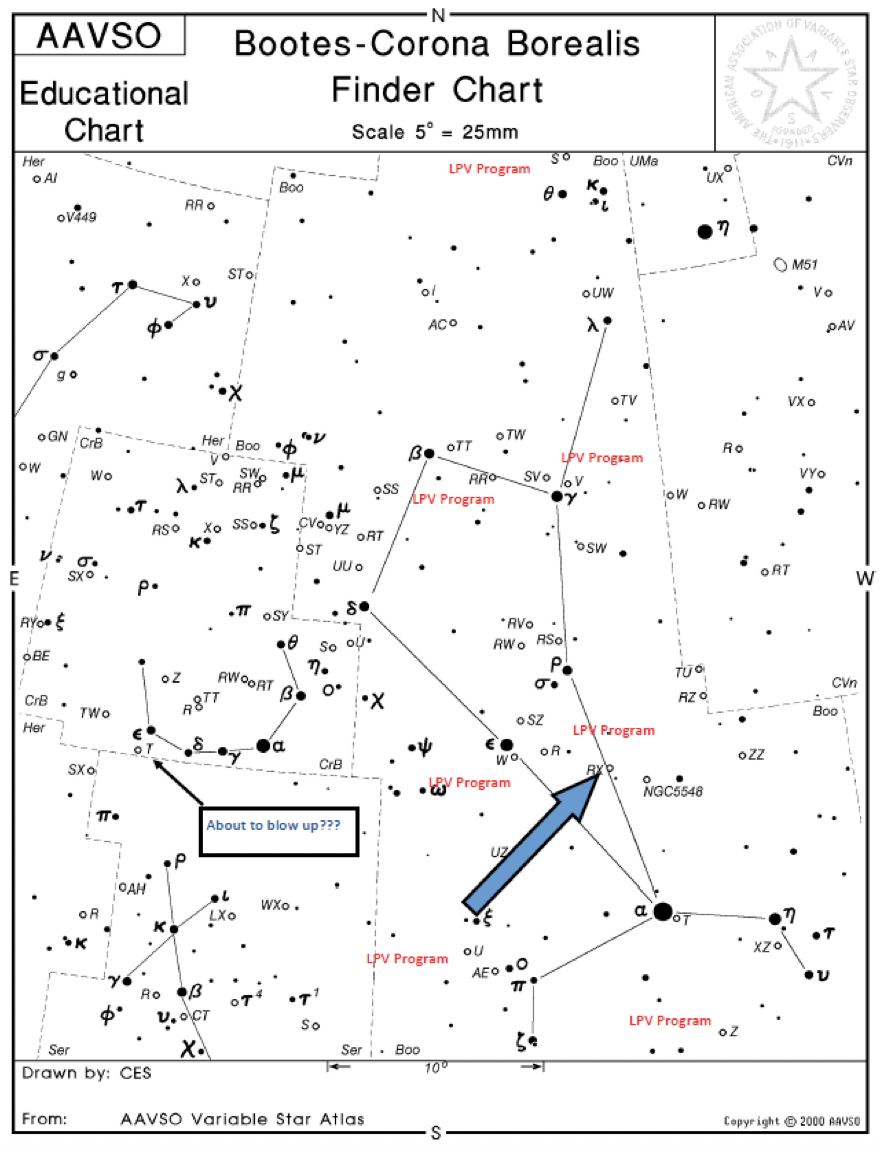 RX Boo’s periodicity is not well defined, as the star is likely pulsating in multiple modes. When Mattei et. al (1997) studied the periodicity of a multitude of LPVs, they determined RX Boo was likely triple-periodic, although they could not confirm it. Only three such triple-periodic stars were confirmed in the study. Andronov & Kudashkina (1988) also found three periods of 352, 179, and 162 days; however, they questioned the legitimacy of the 352-day period since the value was so close to one year and possibly a seasonal effect in the periodogram. VSX lists two periods for the star: 158 and 111 days. Speil (2006) found two periods of 160 and 278 days, which he later amended to 158 and 293 days, while also noting the amplitude on the first period to be much greater than the second. Other periods are cited in literature, and they can be all over the place, which is understandable when you look at the Fourier spectrum in VStar and the light curve.

Of course, the best way to help sort all this out is with increased observations of the star.

Kamezaki et. al. (2012) attempted to determine the physical stellar characteristics of the star using VLA data and the Mira period-luminosity relationship. RX Boo is fairly close to us at 139 +/- 10 par-secs.  Kamezaki’s method was consistent with parallax data from Hipparcos, but they were able to reduce the uncertainly in the distance, and thus better calculate the star’s physical properties. According to their findings, RX Boo is 266 times the radius of the sun, and 3,630 times more luminous. This means that if RX Boo was in our solar system, it would extend about halfway between the orbits of Earth and Mars.

We need to continue our visual observations of program stars like RX Boo. RX Boo is bright, easy to find, near other interesting variables, and interesting in its own right. Below is a list of the program stars in Boo. Let’s keep up the good observing!