If it’s a crisp late winter/early spring night and you’re out star-gazing, do you pay any attention to dim little Lynx? I sure don’t. I’ve never pointed it out to anybody while showing them the night sky since a 3.14 magnitude alpha star in suburban skies is just not that impressive. Even with a scope, the constellation doesn’t offer a lot in the way of impressive sights. An 11th magnitude planetary nebula and a few dim galaxies is about all it boasts. Does this mean we should totally disregard the constellation? No, of course not. Although it lacks any bright stars or Messier Objects, it still is home to a handful of interesting LPVs which need to be loved.

R LYN has a long observational history, with the first observations in the AID dating all the way back to 1874. While working at the Harvard College Observatory, Annie Jump Canon observed R LYN from 1900 to 1908. The star has received near continuous coverage since then, which makes it a good candidate for long-term studies regarding the evolutionary changes of Mira stars. There are currently 15,890 observations of it in the AID, 73% of which are visual. R LYN has received high cadence BVRI photometry for the past several years, which is certainly a good thing. Two photometrists, Dale Mais (MVD) and Frank Schorr (SFRA), have recorded the most total observations of the star—1,076 and 1,064, respectively. Two visual observers are not far behind, however, with Warren Morrison (MOW) at 993 visual observations, and Charles Butterworth (BCAC), who performed 913 observations between 1921 and 1934.

R LYN is classified as a Mira type-variable, meaning its amplitude is greater than 2.5 magnitudes and exhibits regular periodicity. These characteristics are evident when looking at the light curve of the star’s last 20 cycles.

If you take a closer look at individual cycles, you will notice that the change in magnitude stalls out briefly on the ascending branch.

These “stall outs” or LPV “humps” generally last about 20–35 days and are thought to be caused by shockwaves in the atmospheres of Mira-type variables. Frank Schorr did a study to identify stars with these humps and found that 77 stars out of the 450 he sampled exhibited some sort of hump or dual maximum behavior. R LYN is one of the stars in his study, and he continues to monitor R LYN with the AAVSO’s Bright Star Network. You can read more on Frank’s work on LPV humps.

Besides having a hump, R LYN also belongs to a rare spectral class of stars which are chemically very interesting. R LYN is an S-Class Mira, which means the carbon to oxygen ratio in the stellar atmosphere is close to one and there is evidence of s-process elements, which form nuclear process during repeated dredge-up events. The chemical complexities of these stars give researchers many tools to study the circumstellar environment and stellar winds associated with these types of stars. I did not find any observations of this star in the AAVSO Spectroscopy Database, and I hope this changes in the near future. R CYG is another popular S-Class Mira I wrote about.

R LYN’s period seems to be fairly stable. VSX lists the period at 365.5 days; however, 379 days is the period most used in literature. Using VStar, I determined a period of 378.4 days. The phase plot for the 378.4-day period was much cleaner than a 365.5-day phase plot. From the phase plot, you can see some indication of cycle to cycle variation in the period, something which in not uncommon for this type of star. I found no evidence of multi-periodicity, which is not surprising, since Mira stars pulsate in the fundamental mode.

As you can see, the period has varied slightly between 380 days and 372 days over time.

The amplitude also varies over time, something which can easily been seen in the 20-cycle light curve shown above. This behavior is also typical of these highly evolved stars.

One challenge in observing high-amplitude Mira-stars is having good comparison stars throughout the entire range. This can be especially difficult when Miras are near their brightest. R LYN does not have this problem, with good comps throughout its range. Within a degree you can find an 8.9, 8.2, 7.9, and a 6.9 comp, which allow for good measurements when bright. Most backyard astronomers should be able to follow the star throughout its entire range. So keep at it! Since Lynx doesn’t offer much in the way of sight-seeing, take in a few of the constellation’s LPVs. Listed below are the 10 most observed LPVs in Lynx to enjoy while you’re in the neighborhood. 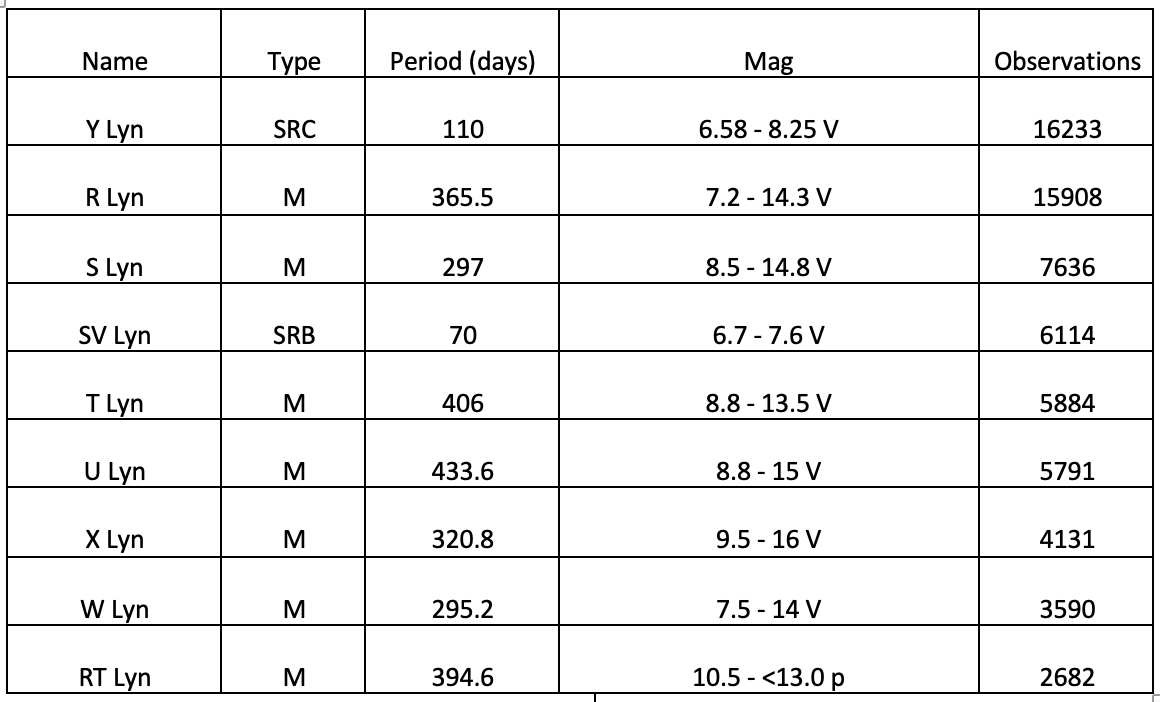