T Ursae Minoris (T UMi) is an LPV that has shown a dramatic increase in its period and decrease in its brightness over the last 39 years, so much so that it is no longer considered a Mira type of LPV but is now classified as a Semi-regular (SR) LPV.

Some astronomers feel this LPV may have gone through Helium Shell Flash in the relatively recent past, which in my opinion makes it a great target to help gather more data about what happens to a star after a Helium Shell Flash.

The first observation for T Ursae Minoris (T UMi) in the AAVSO International Database (AID) is from Oct 27, 1904.  It has been monitored steadily until the present and currently has over 17,600 observations reported in the AID.

Oringinally T UMi was a normal looking Mira LPV star of spectral type M4e-M6e and a Magnitude range of 7.8 to 15 Mag in V and visual until 1979.

Until 1979 T UMi's period was about 310 days.  At that time the period decreased suddenly to 274 days and then continued to decrease to 229 days and switched modes around 2008.  T UMi is a now considered a Semi-regular (SR) LPV with a dominant period of @113.6 days, 2.7 time less then it was in 1979, and it still getting shorter.  This is the at the highest known period rate change for all LPVs.

This mode change is unusual for a LPV that does not have a spectral type of SC or CS. (Uttenthaler) 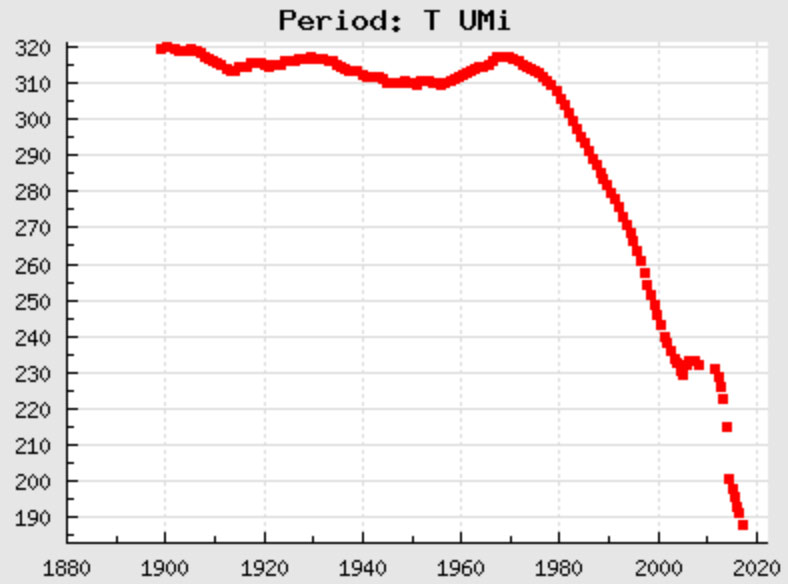 The above is a period graph for T UMi from Thomas Karlsson's monumental work of the O/C, Period and Mean Lightcurves of around 490 Mira variable stars.  The main webpage of his study can be found at http://var.astronet.se/mirainfooc.php.

This period graph clearly shows the rapid decrease in T UMi's  period with an interesting little “hitch” that should be looked at closer. T UMi then continued to decline at the rate it did before the hitch!  What kind of dynamic or object could have changed the period of the star to cause that hitch?!  Will there be another “hitch” in the future as this star goes through changes? Perhaps this an indication of the mode change the star has gone through recently?

The luminosity of T UMi has also declined as has its average amplitude as seen in the following light curve. 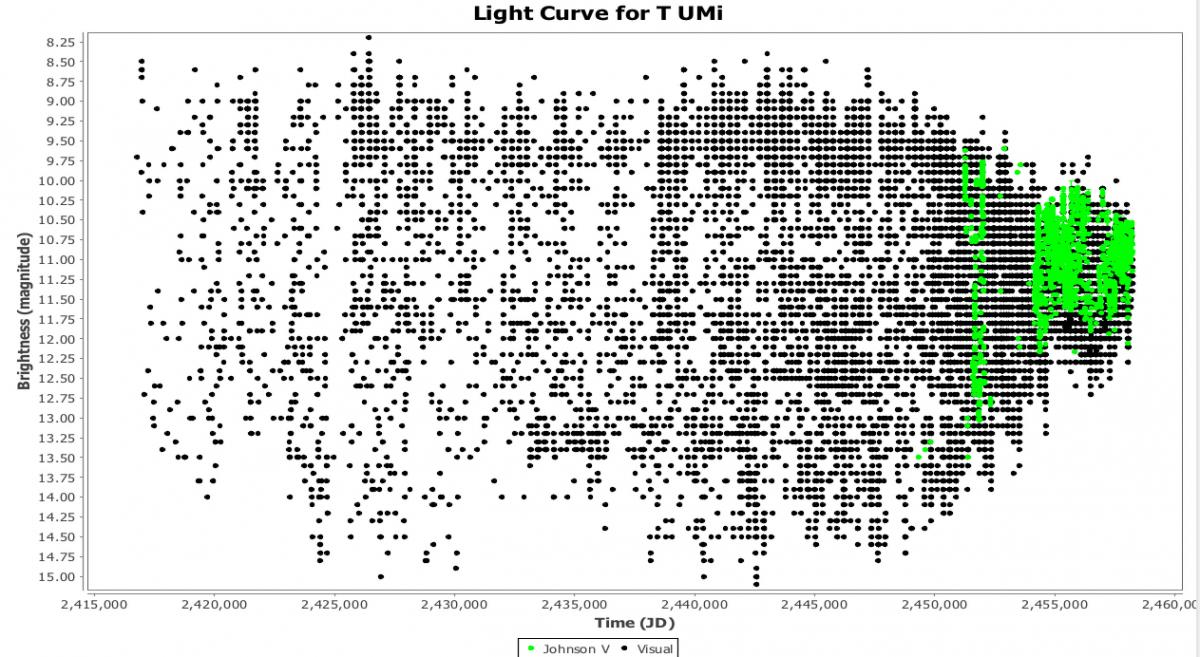 Originally the Maxima and Minima for T UMi averaged between 7.8 to 15 Mag in V band and Visual but today the difference between Minima and Maxima is well under 2 Mag, mostly between magnitude 10.5 and 12 in V band and Visual.  To me, there seems to be a pretty strong correlation between the decrease in the overall brightness of the T UMi and its Period.

At the same time it appears that T UMi seems to be possibly be developing a Dual-Maxima type behavior for a number of possible reasons that are beyond the scope of this article..

Between the period decrease and decrease in amplitude T UMi is no longer technically classified as a Mira LPV but is now a Semi-regular (SR) LPV.

It’s pretty obvious that T UMi is going through a major change! 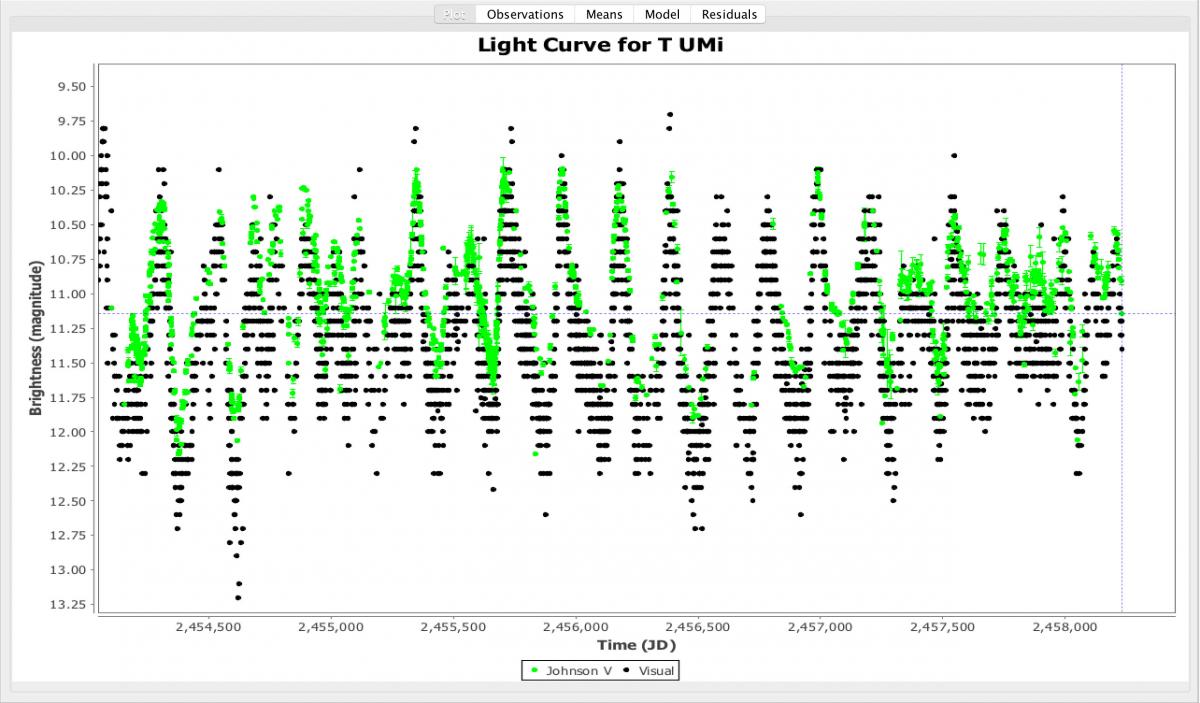 In the Light Curve (LC) above of T UMi for the last 4000 days, you can see how the light curve has become “ragged” for the lack of a better word.  The Maxima on at least three occasions have been truncated or flattened.   T UMi shows other behavior that changed the shape of the light curve that almost look like the beginning of the Dual-Maxima behavior seen in some LPV stars such as BH Cru, R Nor , R Cen and a score of other LPVs.  Please see https://www.variablestarssouth.org/project-dual-maxima-miras/and https://www.variablestarssouth.org/wp-content/uploads/2017/05/Walker_2014_Dual_Max_Miras.pdf for further information on Dual-Maxima stars current research.

It has been suggested that T UMi may “recently” have undergone a shell helium flash or Thermal Pulse where helium around the dense core of the star reaches a critical mass and ignites.  After this flash the star has to adjust to this release of energy causing many of the characteristics of the star to change including changes in its period, amplitude, luminosity and perhaps a secondary period in addition to the primary period.  These changes may last hundreds or thousands of years.

R Hya has also been going a rapid period change that is very similar to the one T UMi but at a slower rate.

John Isles in a 1996 paper does an excellent job explaining the potential “shell flash” that R Hya may have gone through to produce its decreasing period.  This may be helpful in understanding more about this phase in LPV star evolution and it may very well help explain the period loss in T UMi.

“The century of steady decrease in R Hydrae's period is consistent with theoretical calculations of what should happen to a pulsating red giant after the sudden ignition of helium near its core. Mira stars are old and highly evolved, and their supplies of nuclear fuel are close to exhaustion. At the center of the star is a small but very dense core composed almost entirely of carbon and oxygen, the end products of helium fusion. In a shell just outside this core, hydrogen is being converted to helium, so a thin layer of helium builds up on the core's surface. Every 1,000 to 10,000 years this helium shell should reach a critical mass and ignite, creating more carbon and oxygen.

As soon as helium burning begins, the shell rapidly expands and the hydrogen burning above it turns off. For about a century the star derives its energy from helium fusion. When most of the helium is consumed the "shell flash" ends, the shell shrinks, and hydrogen burning resumes. A star may undergo several helium-shell flashes near the end of its time as a red giant. Eventually the star's outer layers will be expanded into space, and the carbon-oxygen core will shine as a white dwarf.”

To me, the big difference between R Hya’s behavior and that of T UMi is the loss of average amplitude that T UMi is experiencing that T Hya is not experiencing.

It’s felt that at any one time, 1% of LPVs should experiencing some effect of a Thermal Pulse (TP) in their past so there should not be many LPVs at any one time showing the effects of a TP.

However, T UMi does not appear to have had a 3DUP event that dredged up Tc as the Tc line is missing from its spectrum, which may make its behavior more unusual then some but beyond the scope of this article (please see the references at the end of this article for more information).

Uttenthaler  states “If a recent Thermal Pulse is the cause of its period change, it is possibly an early (weak) Thermal Pulse.”

As Uttenthaler mentions in his paper, “Continued photometric monitoring will be very important to follow the exciting evolution of this star” as we are watching it unfold faster over the last 10 years.  There are only a handful of stars going through this type of Period or brightness change, some of which have been the subject of past “LPV of the Month” articles. This handful of stars (and possible the Dual-Maxima stars) are very important to observe over the next 10 or so years as they might be evolving before our eyes!

Along with continual Visual observations, it’s important to try to get images in other color bands such as B, V, Rc and Ic which may help tell more about the changes the star is going through.

It is well placed for “northern” observers, and magnitudes for the star are well placed this summer for both visual observers with telescopes and CCD observers to make it an easy target for northern observers.  Help watch the evolution of an LPV unfold!