Leo never seems to get the respect that it deserves. When I see Leo rising on his hind legs in the evening, I know spring is near. Most non-astronomer types can name constellations like Orion and the Big Dipper asterism, but none seem to know anything about Leo. Leo is so striking and majestic, that I find it hard to fathom it lacks general awareness amongst the general populace. When most amateur astronomers think of Leo, they think about the galaxies tucked underneath great Leo’s belly. This group knows Leo has much more to offer, such as numerous interesting variables. An entire night can be spent observing variables without ever leaving Leo’s boarders. This month we’ll dive deeper into one of the most often observed LPVs, R Leonis.

R Leo is the 3rd most observed LPV in the AAVSO database (AID), behind the Mira variable Khi Cyg and the semi-regular Z Uma. Seven different observers have logged more than 1,000 visual observations of the star. Of the almost 103K observations in the AID, 95.7% are visual observations. The reasons why R Leo is so popular amongst visual observers are fairly obvious. For one, it is easy to find as it lies between two naked-eye stars, Regulus (1.4 mag) and Omicron Leo (3.5 mag). R Leo is also relatively bright, reaching maximums around 5th magnitude and minimums around 11th magnitude, which allow for small scopes to follow the star throughout its entire period. The star also enjoys reasonably good comparison stars throughout the entire range of its amplitude. 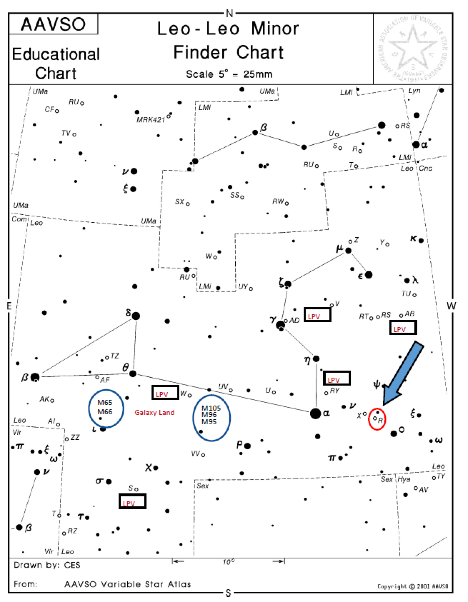 R Leo is a fairly well-behaved Mira early in its life on the asymptotic giant branch (AGB). The star’s minima and maxima do vary some from cycle to cycle, which is not uncommon amongst Mira stars. R Leo’s mean period is also fairly consistent at around 312 days. No signs of multi-periodicity exists, which is typical of oxygen-rich Miras like R Leo. Below are the last 25 cycles of visual and Johnson V data.

In the last 4 cycles, you can see the season gap move slightly through the light curve, since each cycle is slightly less than a year.

When I ran a DC DFT scan on the visual data in VSTAR, a 311.9-day period produced the strongest results. Similar results were seen when doing the same analysis on the photometric data. 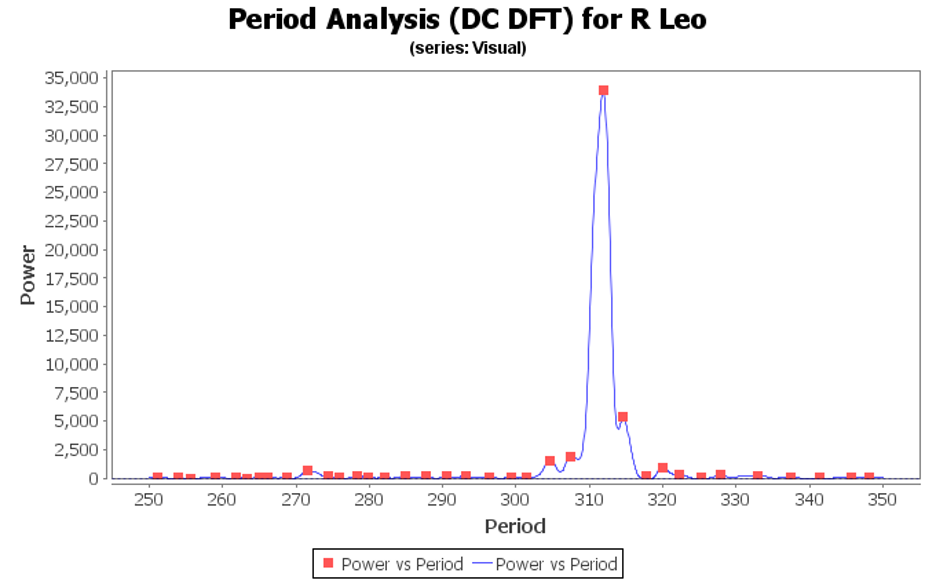 This period produced a reasonable phase plot from the photometric data.

Some cycle-to-cycle variation can be seen in the phase plot. This is due to Mira period “meandering.” Many Mira stars’ periods vary within a few percent of the mean from cycle to cycle and this is clearly occurring in R Leo. Below is how the period is varying with time. As R Leo evolves, its mean period will likely begin to change as well, so we need to continue to monitor to see when/if this occurs.

Since R Leo is early in its life on the AGB, it still has a higher oxygen abundance than carbon. At maximum, its B-V is around 1.5, and around 2 when at minimum. The B-V is greater when at minimum due to the surface cooling while the star expands. R Leo’s temperature varies between about 3000K at maximum and 2500K at minimum, which produces a deep orange color. Below is a graph of Johnson V and Johnson B to show the widening between the two pass bands as the star approaches minimum light.

R Leo is well studied in the professional community. The star has been observed in every imaginable passband because R Leo has some highly complex structures in its inner envelope. R Leo is highly asymmetric in radio wavelengths, and an interesting molecular layer can be detected in mid-IR wavelengths between the optical and radio photospheres. Like most AGB stars, R Leo has a stellar wind, which is blowing enriched chemistry back into the interstellar medium. R Leo also ejects material in one direction, which can be seen through its SiO maser. Although professional astronomers are collecting a lot of data on the star in multiple wavelengths, the AAVSO remains the best source of visual data for long-term studies of the star’s period and optical amplitude.

R Leo is a LPV program star due to its long observational history and high scientific value. For any new observer looking for a star to observe in March, April, or May, R Leo is probably the best one to attempt. For the seasoned observers, R Leo is a good starting point for a night of variable observing in Leo. R Leo is too bright for almost all the surveys out there, so AAVSO members will remain key for the long-term monitoring of this majestic star as it evolves.