TT Cen is a Mira type variable which is listed in the GCVS as having a period of 462 days with a magnitude range of 11.5 to fainter than 16.5.  It’s discovery was reported by Shapley and Swope in 1940. It was recognized at this early stage as being a Mira with a dual maxima.  Shapley and Swope noted th at the secondary maximum (around magnitude 13) occurred approximately 130 days prior to the primary maximum.

Observations in the AAVSO AID only extend as far as the mid 1970’s, with the number of observations being quite sparse until the late 1990’s.

However despite its relatively short observational history it has displayed a very interesting light curve which is shown in the Figure below.

Clearly the brightness at maximum up until about 2005 was much brighter than the GCVS value (mag 8.5 as opposed to 11.5).  However around this time the maximum brightness decreased quite significantly to around the original GCVS value of mag 11.5 by 2012.  Since 2012, the maximum has started to brighten somewhat.  This is shown more clearly in the Figure below.

The Figure below focuses on the last 1500 days which clearly show the dual maxima with the secondary maxima occurring approximately 130 days before the primary maxima just as first shown by Shapley and Swope.

A quick analysis of the period over the last 18,000 days shows a regular and relatively smooth variation from approximately 467 days decreasing to 447 days by 1992 and back up to 460 days by 2009 as can be seen in the Figure below.  However the observational arc is too short to be confident of any real longer term period changes.  It is possible that TT Cen’s period undergoes “meandering” behaviour.  A number of long-period Miras show evidence of meandering or fluctuating periods. The periods change by 10% over several decades, followed by a return to the previous period. Most Miras that display this behaviour have periods in excess of 400 days. 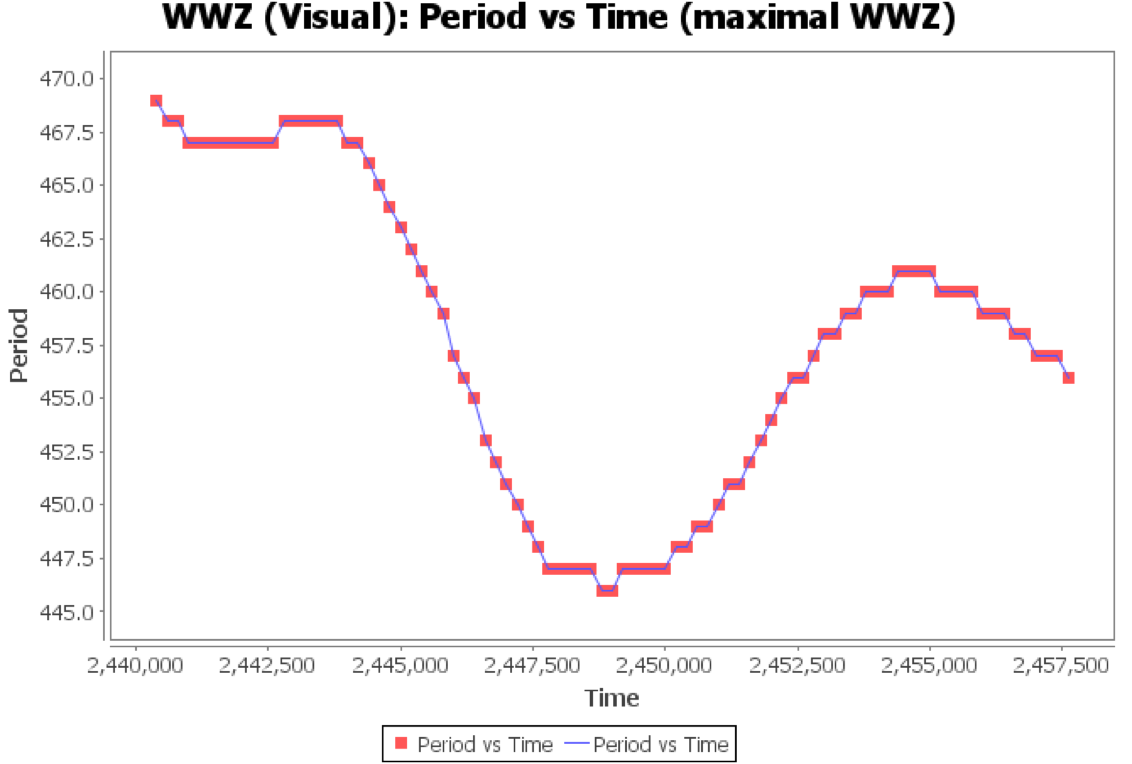 Members of Variable Stars South have amassed a number of BVRI observations of TT Cen right throughout a full phase and these results are shown in the Figure below.  The V measures have been offset by -4 magnitudes in this Figure to put everything on the same plot. It can also be seen that it has changed from V = 12 to V = 10 at maximum over one cycle reflecting the dual maxima of this star. Positive values indicate that the star is brighter in the second filter of each pair. The concept relates to temperature and the larger the colour (often called a colour index) the cooler the star.

The B-V colour of ~2.8 at maximum is typical of carbon stars.  We are indebted to Stan Walker (Variable Stars South Director) for permission to include this information in this article.  Further information on TT Cen is contained in the VSS April 2016 Newsletter. 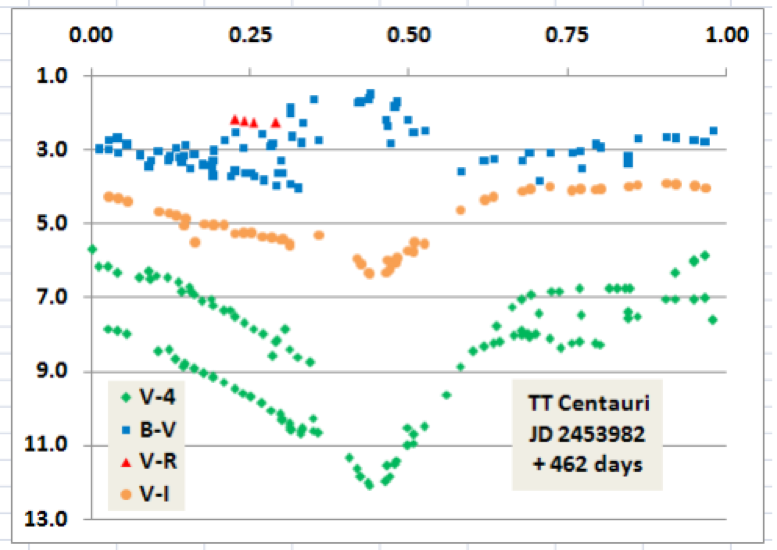 TT Cen has also undergone some remarkable spectral changes as recorded by Stephenson (1973), who summarized evidence that it may have recently changed from showing dominantly S-type to dominantly C-type characteristics. If this is the case, then it is probably the result of dredge-up following a recent helium shell flash.

Mira variables are thought to be in the asymptotic giant branch (AGB) phase. The hydrogen-burning shell is the main energy source during most of the time on the AGB, which is interrupted by powerful ignitions of the helium-burning shell.  These ignitions are called helium-shell flashes or thermal pulses (TP). A TP has a large impact on the structure of the whole star: the luminosity, temperature, radius, and thus pulsation period of the outer envelope, are predicted to vary strongly within centuries. For a star around 2 solar masses in the middle of its TP-AGB phase, the TP itself is thought to last about 300–400 years. Several hundred years after the onset of the TP, surface chemical composition changes can occur as a dredge up of material takes place.

Therefore there are some interesting processes happening for TT Cen and all southern observers are encouraged to monitor the star in all wave lengths.