R Aquilae (R Aql) is a “special” Long Period Variable (LPV) of type M (Mira) that has a long observing history with the first observations reported in the AAVSO International Database (AID) on August 2, 1856.  In total there are about 55,600 observation in AID 99% of them Visual observations.

The spectrum for R Aql is M5e-M9e which makes the star an M type spectral class star.  Data from observations for R Aql in the AID, B-V values for R Aql range from about 1.6 (near Maxima) to 2.2 (near Minima) which makes R Aql a fairly red star.

R Aql is one of 8 or so LPVs that have had a pronounce change in it’s period.

The magnitude range for this star in V band is 5.5 - 12 V which makes it a good target for both visual and CCD observers. 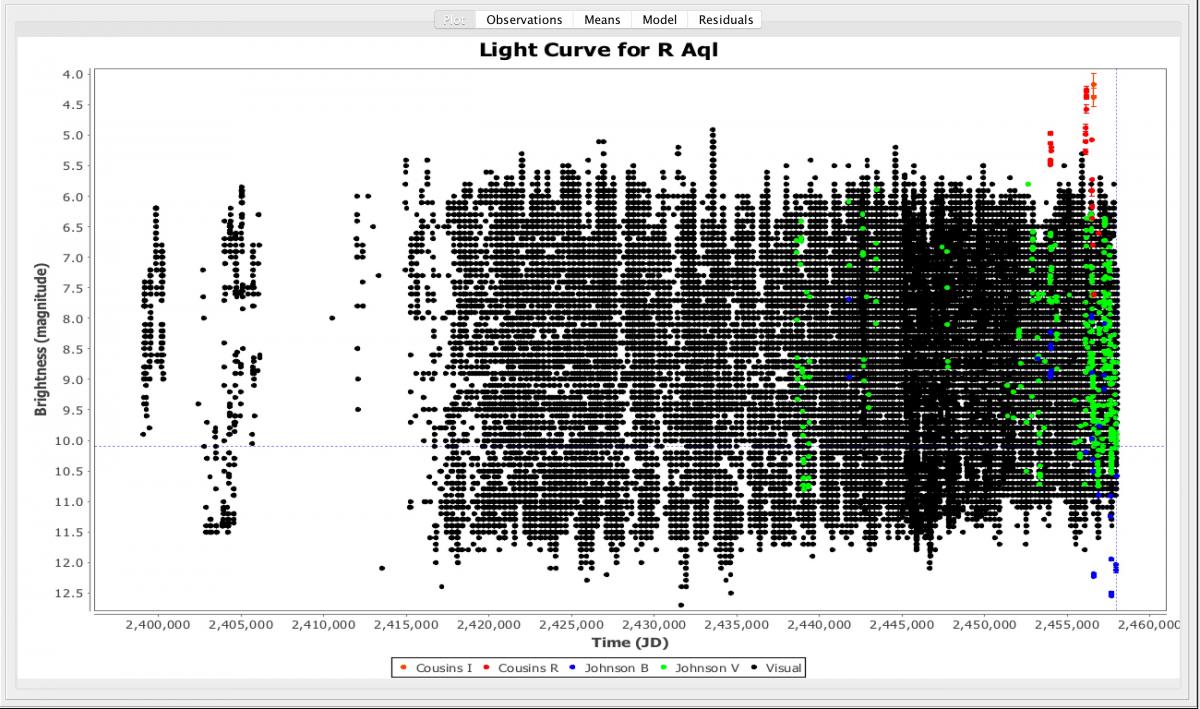 This lightcurve (LC) graph shows all of the observations for R Aql that are in the AAVSO International Database (AID).  It shows that the Maximas and Minimas for R Aql stay pretty steady around the 5.5 to 12 V magnitude range unlike many LPVs who vary more.  There are gaps in the data early in the LC but by around 1910 until today there has been steady stream of observations reported to the AID so there is good coverage and a rich history of observations for this star. 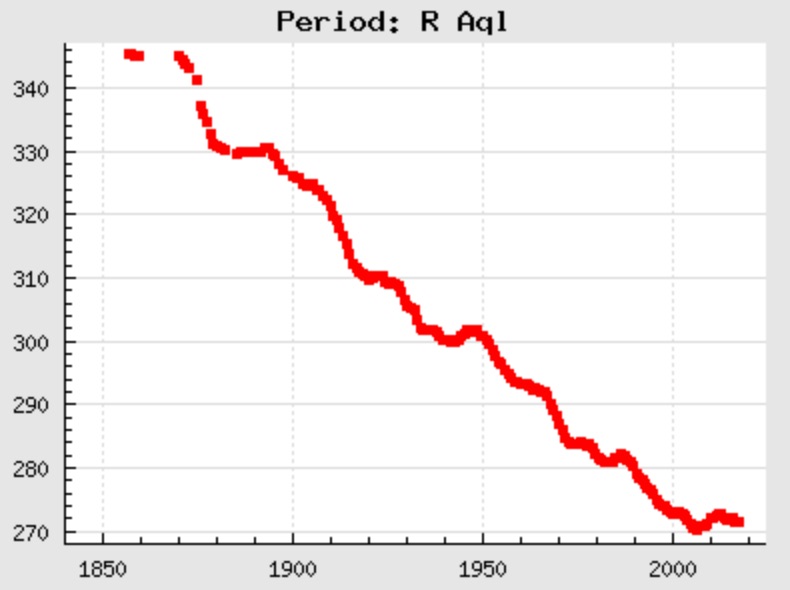 The above is a period graph for R Aql  is from Thomas Karlsson's monumental work of the O/C, Period and Mean Lightcurves (LC) of around 490 Mira variable stars.  The main webpage of his study can be found at http://var.astronet.se/mirainfooc.php.

The above chart shows R Aql’s period was about 353 days in 1856 and has steadily decreased to about 270 days by @2007 but it has increased by a few days since.   This graph shows periods of times where the period for R Aql “stands still” for @10 years and it’s period might actually increase for a few years.  The star may be in one of those  “increase for a few years” periods at the present time.  More observations are needed in the future to follow the period changes for this star.  This type of change in cycle periods is very unusual for almost all Mira LPVs. 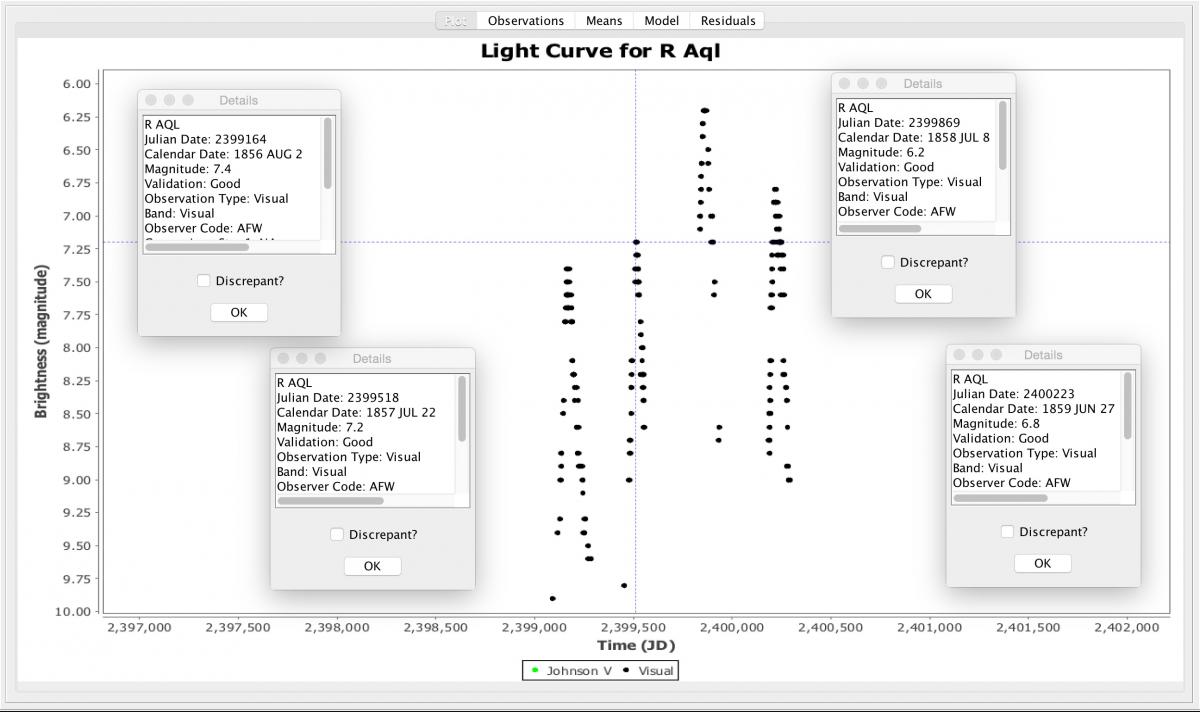 The first handful of periods for R AQL in the AID show that the star’s period was about 351 to 354 days for least 3 cycles .

At the beginning of the light curve in 1856 until the 1870s it appeared that the period for R Aql may have been the same for up to 15 years.  Because of the other “standstills” this star presents at times, it’s more likely that the decrease in R Aql’s period began before the first records for the star were recorded.  It’s felt by some that the period decrease may have been going on for hundreds of years earlier.

The period change of R Aql puts it into a class of LPVs that steady or sometimes quickly change the rate of their period.  Other LPV stars that show steady or rapid changes are stars such as R Aql, R Hya, R Cen and R Tau showing period decreases and stars such as T Umi, BH Cru, LX Cyg and W Dra showing period increases.  A number of “LPV of the Month” articles have been written about some of these in the last two years.  You might find them interesting reading.

Templeton et al suggested in their paper on “Secular Changes” that R Aql and R Hya are possible examples of thermal pulsing stars.  Woods and Zarro mentioned in their 1981 paper that R Aql’s behavior could reasonable interpreted “as the result of radius variations after the peak luminosity in a thermal pulse”.

The Wikipedia article at https://en.wikipedia.org/wiki/Asymptotic_giant_branch#Late_thermal_pulse defines a “thermal pulse” this way:

The outer atmosphere of the born-again star develops a stellar wind and the star once more follows an evolutionary track across the Hertzsprung–Russell diagram. However, this phase is very brief, lasting only about 200 years before the star again heads toward the white dwarf stage. Observationally, this late thermal pulse phase appears almost identical to a Wolf–Rayet star in the midst of its own planetary nebula.”

There is much discussion on thermal pulses in general and if they really cause this type of behavior that are beyond the scope of this article. 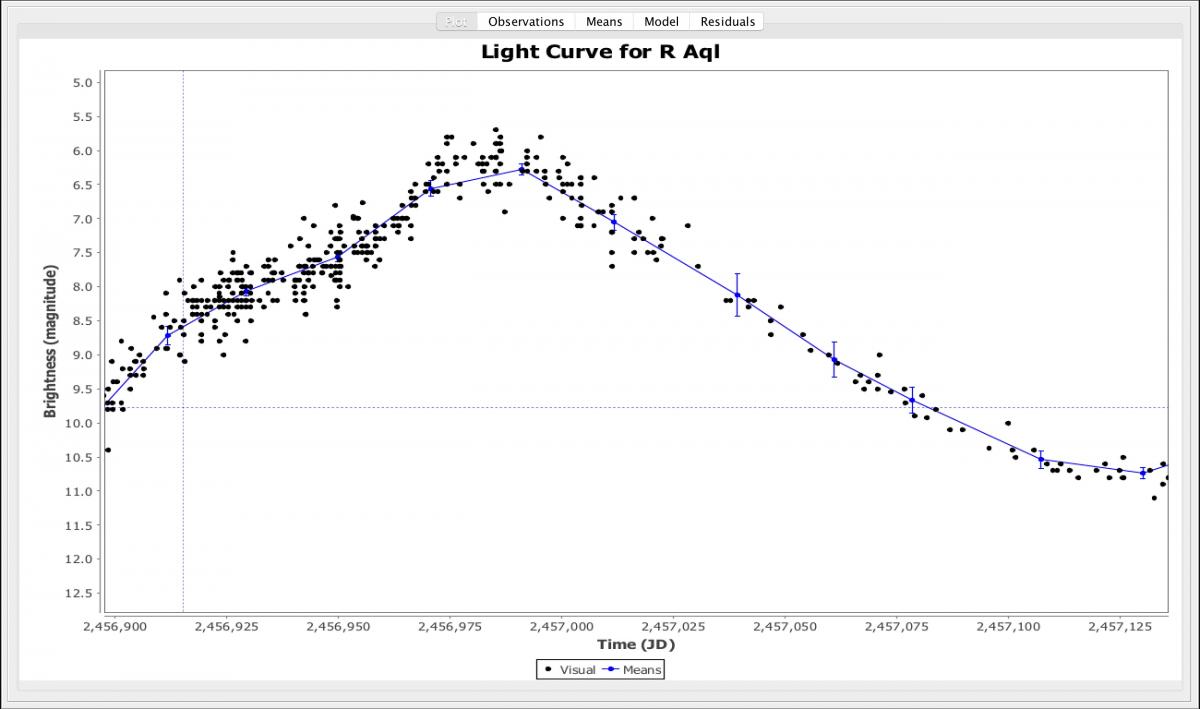 R Aql does show an occasional “hump” or “stand still” on the ascending part of it’s Light Curve (LC).  It shows up quite well in the Visual data points for some cycles.   For more on “humps” or “stand stills” of LPV stars, please view the “LPV Humps” page of the “AAVSO Long Period Variable Section” web page.

One thing that is sorely missing in the data points for R Aql is “color” information for the star.  Because of it’s relative brightness, trying to get date using a CCD Rc or Ic photometric filter can be challenging particularly when the star is near it’s maxima.  As an example, the Ic magnitude for R Aql is around 4th magnitude when the star is at it’s minima!  I’m not sure what the magnitude would be at maximum because there is no value in the AID for Ic at maxima.

At the minimum, observations with a CCD camera should be taken with a V and B filter and transformed which would give some “color” information about the star along with the wonderful visual  data that is collected.

R Aql may be bright enough to try to get some spectrum of the star which might be helpful gathering further information as the period of the star continues to change.

This LPV is one of a very small group of LPVs that show large period changes that should be followed by AAVSO and other observer for another 150+ years. I suspect that it may provide many surprises for us as it goes through further changes.