T Cam is a bright Mira that has been well observed by the AAVSO since 1904.  Over 18,000 observations are in the AID from over 600 different observers as can be seen in the light curve shown below which displays all observations in the AID.  It is one of the Legacy LPV Program stars.  Since it’s a northern circumpolar star, there is generally very good coverage year round 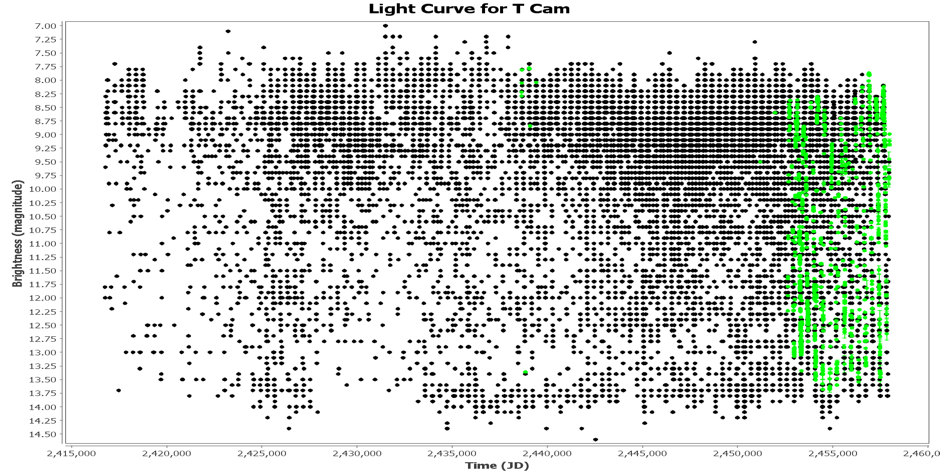 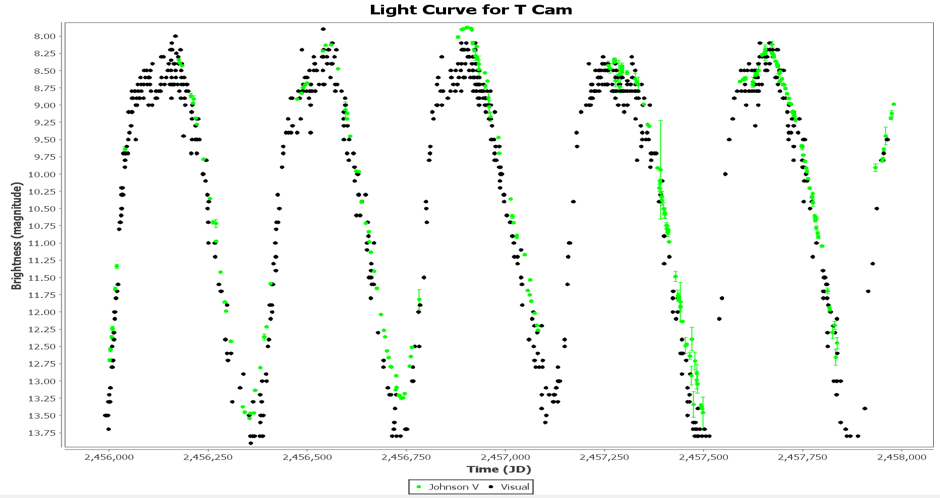 The light curve based on the last 6000 days is shown below. 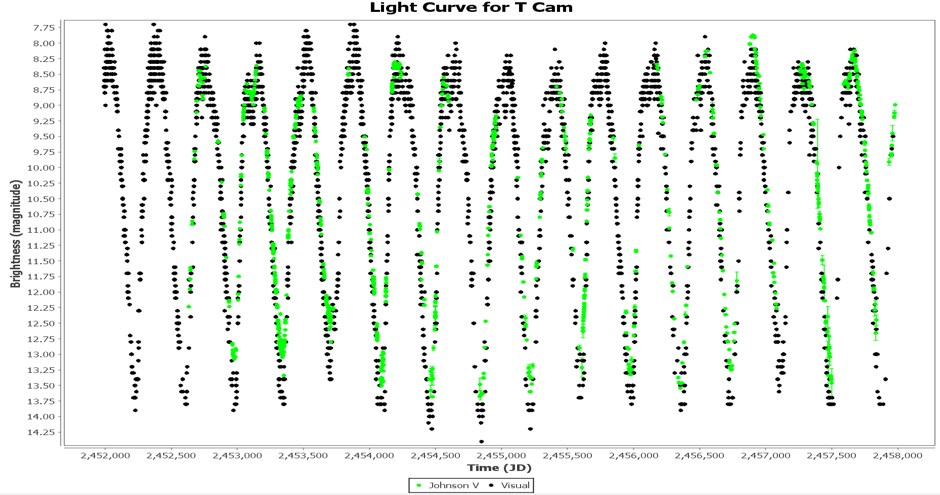 Analysis of all AID data in the period 1904 to the present day indicates an overall mean period of 373.6 days.  There is also another signal present at 357 days which could be an annual alias of the main period.  Another one is present at 185 days.  This one could be an annual alias, however since coverage of the star over the year is reasonably complete, it is more likely this is a harmonic of the main period which reflects the non-sinusoidal nature of the light curve.

T Cam is contained in the list of LPV Humps maintained by Frank Schorr as a possible “candidate” for a LPV hump star.  It seems to show what appears to be a double maximum on specific cycles.  This is evident to some degree in the phase diagram below which is based on the complete dataset.  For other cycles, the discontinuity appears to be more a hump on the ascending part of the lightcurve rather than a dual maximum 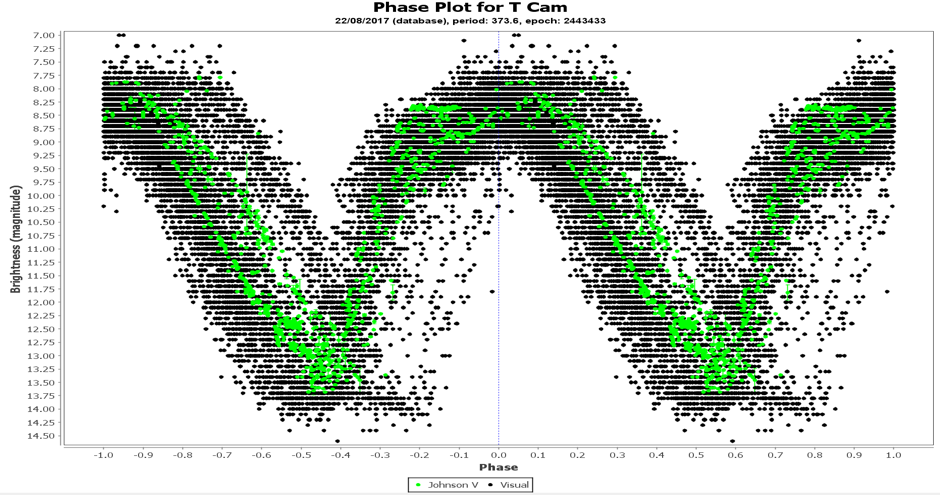 The plot below provide a closeup of a dual maximum feature for a specific cycle (early 2004). 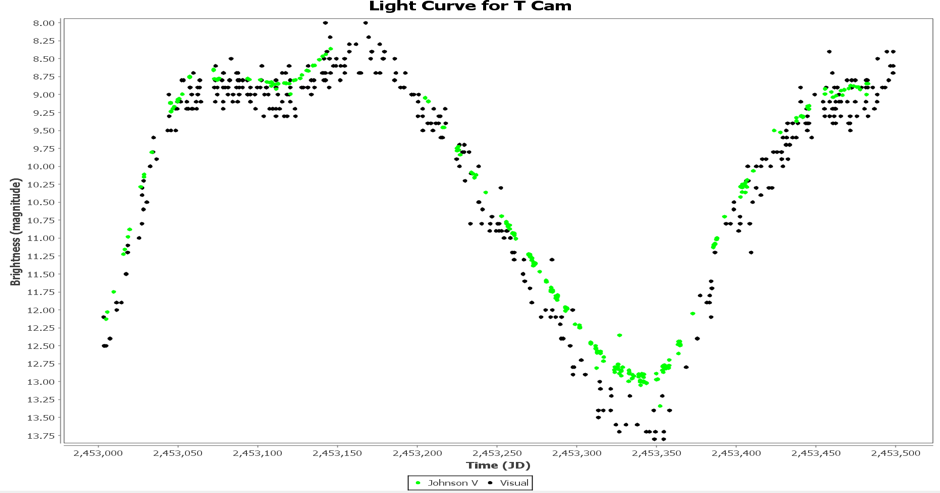 The plot below provides a closeup of a hump feature for a specific cycle (mid 2005).  The difference between the dual maximum and hump features appears to be that there is a definite dip in brightness between the discontinuity and the main maximum for the double maximum case.

Marsakova and Andronov (2007) analysed a selected group of LPV's which show hump features in their light curves based on 80 years’ worth of data from the VSOLJ and AFOEV and T Cam was one of the stars analysed in greater detail.  They found that, as with many other LPV's with humps, the humps don’t occur in every cycle.  For T Cam, they found that it occurred on in 2 out of 3 cycles on average (68 cycles in 100 to be more precise).

The average phase of the cycle where the dual maximum or hump appeared is 0.16.  This can be seen in the phase diagram above based on AAVSO observations.  T Cam has an asymmetrical light curve with the ratio of duration of ascending branch to the total period being about 0.476.

An analysis has been performed to ascertain any changes in mean period in T Cam over the past 113 years based on observations in the AAVSO AID.  The figure below suggests that there has been a "meandering" of the mean period between the range of 366 to 380 days.  This slow meandering behaviour (with period changes generally less than 3.55% of the mean period) is relatively common in the longer period Miras and semi-regular stars.  Similarly there is a small change in the amplitude as shown in the Figure below. 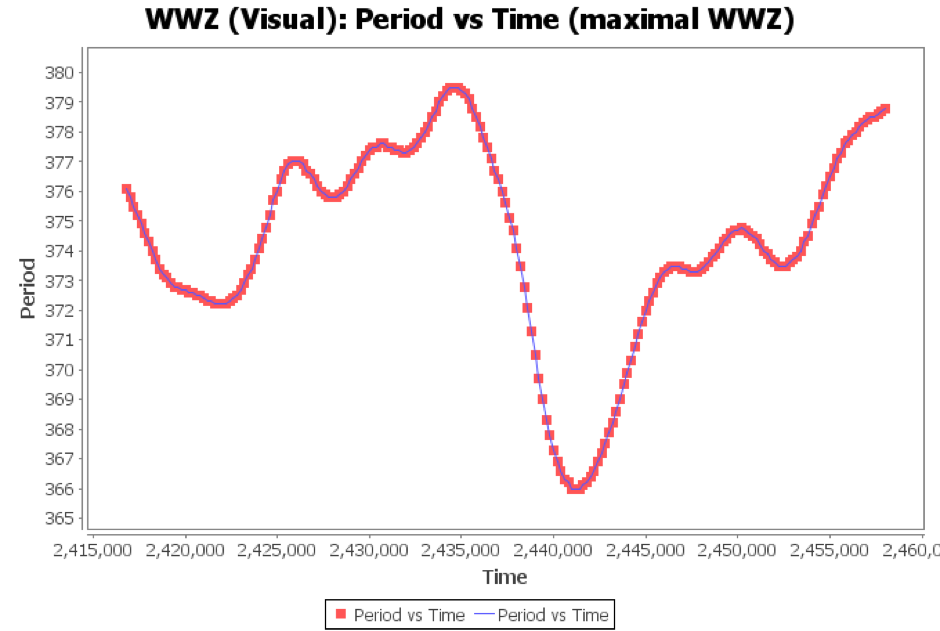 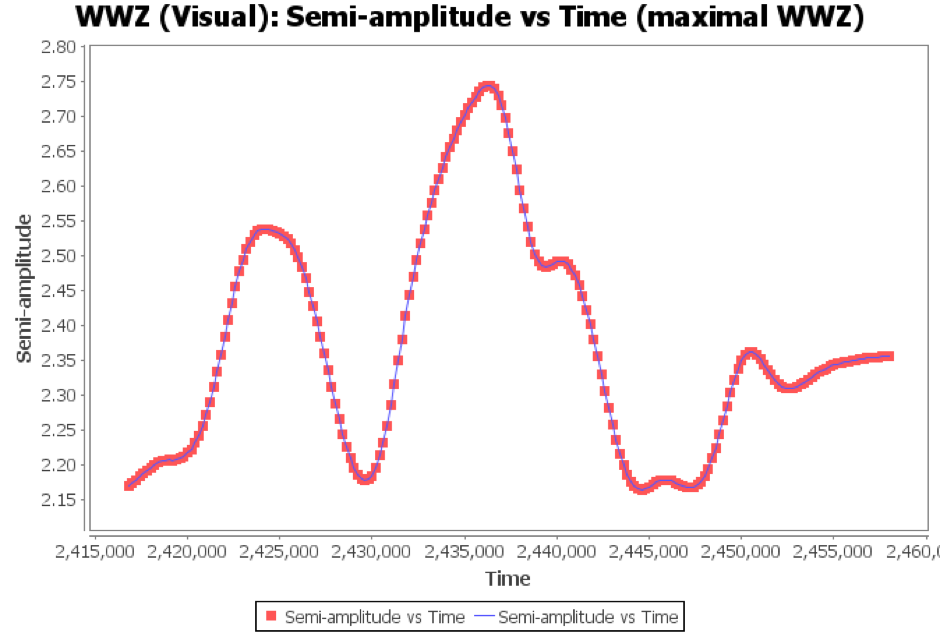 Interestingly T Cam was once believed to show remarkably large proper motions (over 0.1” per year) and was out of kilter with the proper motions measured for other S-type stars.  Stephenson and Hulbert (1984) redetermined T Cam’s position on historical plates and came up with a much slower rate of progression of around 0.009” per year maximum thus revealing it is quite normal!

T Cam is an interesting LPV to follow so all are encouraged to maintain the coverage that has been in place over the last 113 years.