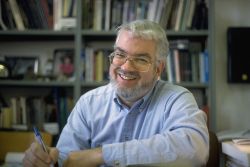 I never got the chance to get to know David as a councilor. He got elected the same year I left council, so I was glad he accepted my request for an interview for the staff blog in October, 2011.

A simple search online will reveal David has had quite an illustrious career with honors such as the President’s Award for Excellence in Research from Saint Mary’s University, Service Award of the Royal Astronomical Society of Canada, Founding Member Special Award of the Sudbury Astronomy Club, Distinguished Alumnus of the Year award by Renison College (University of Waterloo), and dozens of papers published in distinguished journals.

Asteroid 27810 was named Daveturner (= 1993 OC2) by Carolyn Shoemaker and David Levy in his honor in November 2003. You know you've made it when they name a space rock after you!

I thought we should all get to know David a little better. So here is the interview-


SXN: What do you do for a living?

TDG: At the moment I am professor emeritus of astronomy and physics at Saint Mary’s University in Halifax, having retired at the beginning of September. I taught mostly astronomy for 27 years at Saint Mary’s, prior to that 6 years at Laurentian University (Sudbury, Ontario) and 2 years at the University of Toronto. My career at Laurentian also entailed demonstrating the planetarium to over 100 groups a year, towards the end mostly through taped productions that I wrote, produced, and ran myself.

SXN: When did you join the AAVSO?

TDG: My memory is a bit hazy on this, perhaps 20 years ago or more. I will have to check my collection of back issues of JAAVSO to be sure. I became aware of the AAVSO many years ago, through Margaret Mayall’s columns in JRASC and from using the AAVSO Monthly Sunspot Numbers published in Sky & Telescope when I was a student.

SXN: Are you an active observer? If yes, what kind of stars do you observe primarily?

TDG: Well, yes, although not “active” in the sense of using every clear night available. My original area of concentration as a professional astronomer was the study of the Galaxy’s open clusters and the deleterious effects of interstellar reddening and extinction on the photometric properties of cluster stars. I became interested in Cepheid variables when I noticed that many of the same clusters contained them as likely members, which led to my career goal of studying as many of the Galaxy’s Cepheid clusters as possible, the goal being to provide a Galactic calibration of the Cepheid period- luminosity relation (which has now been done). The number of Cepheid clusters used to be only a half dozen, but now numbers on the order of 50 or so, including several clusters that I discovered myself.

My interest in Cepheids developed from that early impetus, and I continue to observe them in just about every way possible: spectroscopically with the Dominion Astrophysical Observatory’s Plaskett telescope, photometrically using the CCD camera on Dave Lane’s semi-automated Abbey Ridge Observatory and an Optec photometer on our campus Burke-Gaffney Observatory, photographically using the Harvard Plate Stacks, and, for bright Cepheids, by eye, sometimes with binoculars, from my back deck in Cole Harbour on every clear evening. I have also observed a few eclipsing binaries, primarily for studying period changes and light curve parameters, and this past summer began collecting my own brightness estimates for Mu Cephei, after becoming aware of problems with some AAVSO estimates for the star.

My interest in photometric studies of Cepheids has been for studying their changes in period, which can be used as a diagnostic for identifying the exact evolutionary status of individual stars.

SXN: Are you active in outreach or mentoring? If so, tell us about it.

TDG: The ~500 hours or more a year I put in directing activities at the Doran Planetarium in Sudbury took a toll on my later outreach ambitions as a university professor, although I continued to do observatory tours and school outreach visits regularly until my retirement. Mentoring has been limited to my students, although I am willing to lend my expertise to anyone who asks. I have been responding to Emails from interested amateurs for several years now, and intend to continue that for the foreseeable future. 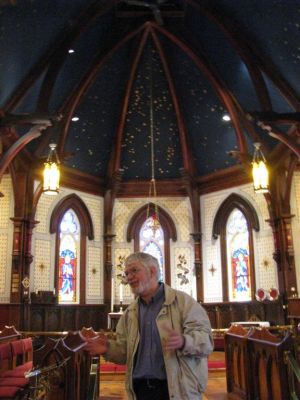 A few years ago I also became involved with the reconstruction efforts for nearby St. John's Church in Lunenburg, Nova Scotia. The church was founded prior to the American revolution, but was destroyed on Halloween 2001 by a fire, possibly started by accident. The chancel ceiling of the church had contained a star pattern that was unfamiliar to the residents, so I lent my planetarium expertise to the project and identified the original star pattern as representing the star scene that would have been visible at the beginning of the first Christmas. The story surrounding that discovery has been greatly publicized, and the resurrected chancel ceiling is now one of the province's greatest tourist attractions.

SXN: What do you think is the organization’s greatest strength?

TDG: Its ability to highlight for the general public the importance and educational value of studying variable stars. I think that comes across primarily because of the enthusiasm of AAVSO members.

TDG: Possibly an over-reliance on soft funding to support ongoing operations. I sometimes wonder if the mandate of the organization has ever been stated clearly.

SXN: What do you think is the AAVSO's greatest opportunity for the future?

TDG: The fact that studies of variable stars, and other objects, have currently become more popular with professional astronomers because of the new surveys, both Galactic and extragalactic, being conducted.

SXN: What do you think is the AAVSO's greatest threat?

TDG: That observations by amateur astronomers may be deemed redundant because of the previous point.

SXN: What compelled you to serve on council?

TDG: Possibly the feeling that I might be able to provide input based upon my experiences serving in a similar capacity for many other different organizations.

Thank you, David, for letting us get to know one of the professional astronomers serving on the AAVSO council.