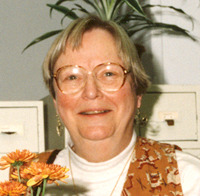 Dr. Hazen entered the world of astronomy at a time when few women chose the field. She graduated from Mount Holyoke College as an astronomy major in 1953. "No one told me I couldn't take physics and math like they were telling every other woman at that time, so I did. Then I went to graduate school at the University of Michigan for my Ph.D. I did my own research over a 17 year period at the U.S. National Observatory in Northern Chile. It was tremendous."

Dr. Hazen was born in Cambridge in 1931 and grew up in Belmont, the town she resided in for most of her life. Her interest in astronomy began there when she was in elementary school. When she finally completed her graduate degree, she discovered that the astronomy world was like many other science fields at the time; women were expected to support their husbands while raising children. She was working on her first husband's [astronomer William Liller] doctoral thesis and raising their two children while he worked at Harvard.

Eventually she was able to enter the astronomical field on her own. She traveled to Chile where she discovered many variable stars, which change their brightness over time. Dr. Hazen also became Curator of Astronomical Photographs at the Center of Astrophysics at the Harvard College Observatory, the largest treasure of astronomical photographs in the world. In addition, she wrote a number of scientific papers, and gave several presentations involving her work. She also helped to rewrite the bylaws of the American Astronomical Society to help remove any gender bias. Finally, she became very active as an officer for the American Association of Variable Star Observers (AAVSO), an organization representing the hundreds of amateur astronomers searching for variable stars, and an organization for which her mother, Katherine Hazen, volunteered many hours during her lifetime.

As a result of her commitment to the AAVSO, Dr. Hazen was presented the 37th AAVSO Merit Award in 2005 "... in recognition of her outstanding service to the AAVSO during many years as Councilor, President, and Secretary, recognizing that she always reflected wisely on the long-term needs of the association and its members and offered sound counsel, especially to the presidents and the Director, and technical support to AAVSO observers while assisting in many other ways." Dr. Hazen also recently had Asteroid number (10024), Marthahazen, named after her by the Minor Planet Group at the Harvard Smithsonian Center for Astrophysics - the deciding body for naming asteroids - as a tribute to her 47 year career.

In early 1991, she married the love of her life, Bruce McHenry, a former ranger in the National Park Service, and for the next 16 years, they were virtually inseperable. Until moving to Linden Ponds in Hingham a couple of years ago, they split their lives between their houses in Belmont and Marstons Mills on Cape Cod. They also traveled to the far reaches of the world, and took several trips to Canada and Europe to explore canals, one of Dr. Hazen's many interests. 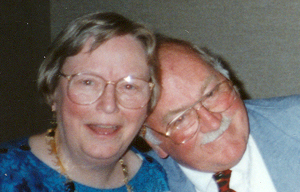 Dr. Hazen retired from the Center for Astrophysics in 1995 to enjoy more time doing things with her husband. She was also able to devote more time to quilting, a passion she discovered in later life. Her quilts have been displayed in a number of local shows, and several have been auctioned off to raise money for the Barnstable Land Trust and the National Association of Interpretation. She also has given much time and energy back to her alma mater, Mount Holyoke College, a place that she has held close to her heart throughout her life.

Besides leaving her husband of almost 16 years, she leaves her sister, Anne Bowen of Salisbury, CT; her two brothers, Stanley Hazen of Charlottesville, VA, and Nathan Hazen of Greenland, NH; her daughter, Hilary Ward of Huron, SD; her son John Liller of Grafton, MA, and five grandchildren.

The above text is an obituary from the Downing Chapel Funeral Services. Images are courtesy of AAVSO.

Message from the Director of the AAVSO, Arne Henden

Message from the Harvard Center for Astrophysics