We are pleased, and proud, to announce that AAVSO staff member and longtime observer Mike Simonsen is the recipient of the American Astronomical Society's Chambliss Amateur Achievement Award for exemplary research by an amateur astronomer. The AAS specifically cites Mike's multiyear Z CamPaign which is dedicated to the long-term study of Z Camelopardalis stars. "Simonsen's research," the AAS announcement states, "...promises to have a long-lasting impact on the field of accretion-disk theory." The full announcement can be found on the AAS's website at: http://aas.org/media/press-releases/aas-announces-2015-award-recipients

Mike Simonsen joined the AAVSO in 1998 and has submitted over 88,000 variable star observations to the AAVSO International Database. He has been involved in many of the AAVSO's activities: he coordinates all variable star chart production for the AAVSO, and oversees CHOICE, the AAVSO's online education institute, as well as the AAVSO Mentor Program, Speakers Bureau, Writers Bureau, CVnet, and is leader of the AAVSO Cataclysmic Variable Section. In 2007 Mike joined the AAVSO staff as Membership Director and Development Officer in which post he is in charge of membership services and fundraising.

His current area of research is Z Cam type of dwarf novae, and he is the author or co-author of more than twenty peer-reviewed papers on cataclysmic variables. The latest of his Z Cam papers was published in The Journal of the American Association of Variable Star Observers (JAAVSO 42.1, 2014, p. 177)

Main belt asteroid 367732 is named Mikesimonsen in his honor. 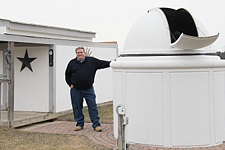 Mike's observatory, named after legendary AAVSO observer and chart maker, Charles E. Scovil, houses two 12-inch LX200 telescopes, one for visual use and one for CCD observations, or as Mike likes to joke, "One for each eye!" He is now amassing both visual and CCD observations from home and remote robotic telescopes.