AAVSO member, observer and science educator Dr. Pebble Richwine has had a minor planet named in her honor - 268242 Pebble. Pebble did her PhD in science education at the University of Arizona where her dissertation was on using variable stars in elementary school science education. She's given talks at many AAVSO meetings and is currently a science educator in Georgia.

Here is the official citation:

Pebble Johnson (b. 19xx) is an innovative teacher of middle-school science and technology in Forsyth County, Georgia. She uses astronomy to heighten interest and excitement in the physical sciences among her students.

The minor planet was discovered by Jim Bedient, also a long time AAVSO member/observer and former council member. Here is his description of the discovery and dedication:

On May 4, 2005, I was observing with the 2.2m Faulkes Telescope-North on Haleakala, Maui.  While observing an asteroid on the NEO list, I observed another object in the background.  I performed astrometric observations on succeeding nights, and it received the provisional designation 2005 JW1. After following it for several years, its orbit has been accurately determined, and a few months ago it received its permanent designation, (268242). Under International Astronomical Union rules, this made it eligible for naming, and of the privileges of discovering a minor planet is naming it. A couple of months ago I submitted a name proposal to the IAU's Working Group for Small Body Nomenclature. Last week I was informed that the proposed name had been approved, and it is hereafter known as (268242) Pebble, in honor of my good friend Dr. Pebble Johnson.

With the boom in minor planet discoveries in the last decade, due the advent of more sophisticated techniques, particularly larger telescopes and electronic detectors, naming citations are required to be considerably briefer than they once were allowed to be.  I really couldn't wax poetic about meeting Pebble ten years ago at Dr. Karen Meech's TOPS workshops in Hawaii, how she became a very dear friend, how I helped with her Ph.D thesis, and all the things, small and large, that go into forming a strong friendship. Placing her name in perpetuity on this small piece of solar system real estate is just an insignificant monument to a person with a very large heart.  I am honored to know her and to be able to make this gesture.

Jim also sends along this  discovery image of the minor planet. Below is his description. 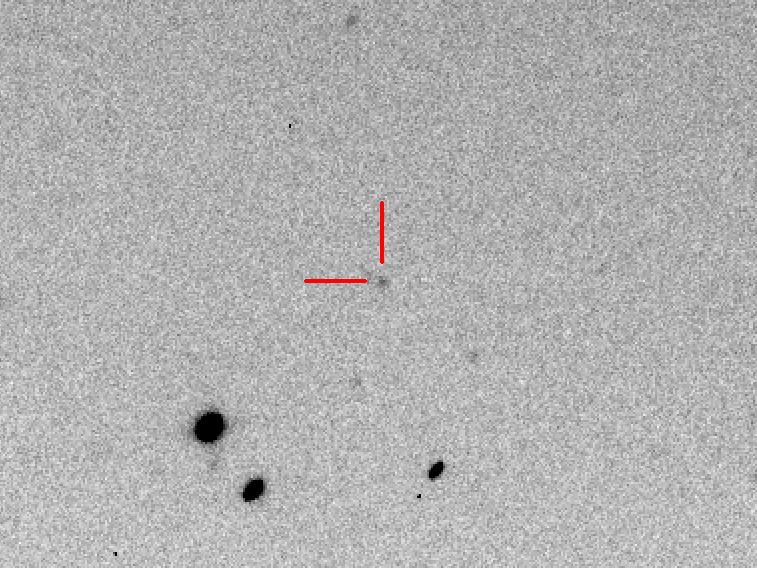 This is an image of Pebble at R=21.3 in northwestern Virgo at
discovery on 5/4/2005.  The stars are elongated because it's a stack of 3x90 second exposures.  This section is about 1.5 arcmin square.

Congratulations to Pebble and Jim!