Nova Delphini 2013 (also named V339 Del) is the biggest cosmic event in variable star astronomy this year, and this naked-eye nova is providing the community a wealth of new data on this important class of objects.  The amateur astronomical community has made an enormous contribution of data for Nova Del so far, and now is a good time to review all that's happened so far in this nova outburst, and how the amateur community has played a role.

Koichi Itagaki, a Japanese amateur nova hunter, detected a bright transient in Delphinus at magnitude 6.8 on August 14 of this year, which subsequently brightened by half a magnitude in just a few hours.  The object was quickly confirmed as an optical transient by a number of amateur and professional observers, and also confirmed spectroscopically as a nova by amateurs and professionals who observed independently at nearly the same time. The nova subsequently rose well into the range of naked-eye detectability.  Within a day, amateur and professional observers were actively following this fine, naked-eye nova.  At one point, more than thirty visual observers an hour were estimating and submitting data for this object.

Subsequent to discovery, astronomers around the world have been following up at nearly all wavelengths, from radio waves to gamma rays.  Nearly five hundred members of the AAVSO community -- amateur and professional -- have contributed optical photometry to the AAVSO International Database. As of the morning of October 30, 481 people have contributed observations, more than four hundred submitting more than one observation.  More than 4,500 visual estimates have been made, and more than fifty thousand instrumental measures have been submitted so far. Observers are still following Nova Del today, and we hope you'll all continue until the star fades from easy viewing. 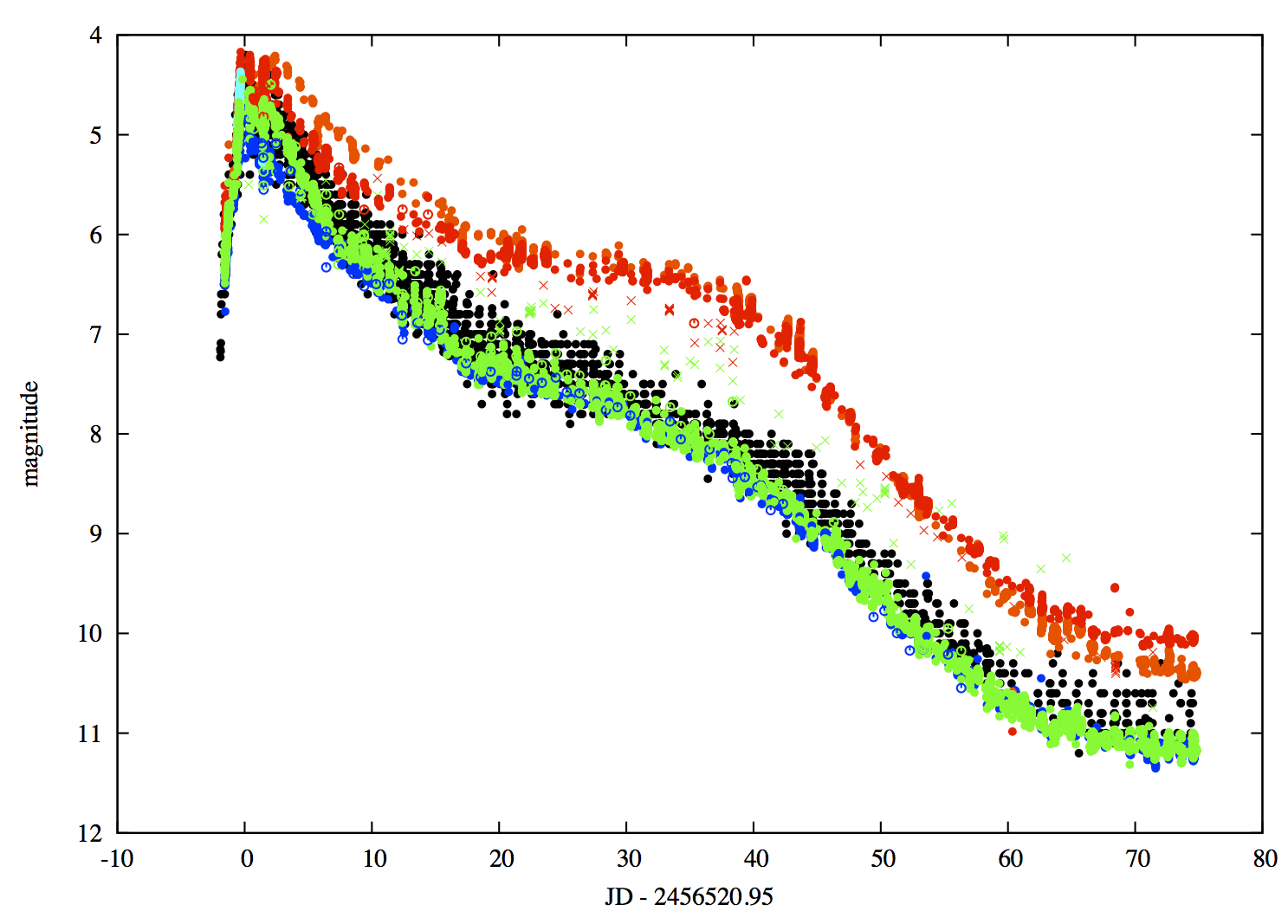 What we've seen so far

Nova Del 2013 is a very fast classical nova (type "NA").  Its nova-nature was confirmed while it was still rising through the presence of optical emission lines of hydrogen typically seen in novae.  V339 Del is another member of the recently-discovered class of novae that show gamma-ray emission, something discovered to occur only recently; gamma rays were first detected in V339 Del by the Fermi satellite on August 18 (day 4).  The nova quickly reached peak and remained near this plateau state for a few days, but began its decline on August 20 (day 6).

Its luminosity and spectral evolution since then has matched those of typical novae.  A nova outburst progresses through several stages and the light curve changes as physical changes happen in the nova remnant and progenitor.  The eruption begins with a bright, optically thick fireball, which begins to slowly cool after maximum light.  At some point, this fireball cools (and fades in brightness) enough that the emission lines from the ejecta dominate the luminosity of the nova; this is the point where you see the first break in the V339 Del light curve around September 3 (day 20).  Over the next few weeks, the system continues to cool and the emission lines fade more slowly than the continuum emission.  X-rays were first detected on September 19 (day 36), which is a sign that the density of X-ray absorbing gas around the white dwarf is beginning to dissipate.  The X-ray light rose steadily coinciding with much faster optical decline, a sign that the material responsible for the emission lines is also starting to dissipate and fade.

Around October 9 (day 55) we saw a large jump in X-rays, and on October 19 (day 65), AAVSO observations show a flattening of the optical light curve.  At that point we likely entered the phase where we're seeing the surface of the white dwarf for the first time since the outburst, and it's generating both the X-rays and the optical continuum emission; the small B-V suggests we're seeing light from an extremely hot blackbody.  As of October 24 (day 70), the nova is now a very bright X-ray "supersoft source", indicating that the environment around the nova's white dwarf primary has cleared enough to let the hot white dwarf shine through at low-energy X-ray wavelengths.  V339 Del is currently entering the "nebular phase" in which a new series of emission lines characteristic of hot, low-density gas appear.

How AAVSO observers are contributing

The AAVSO community -- along with the larger astronomical community -- has collected an enormous amount of data for this nova outburst.  Our community of observers are using nearly every observing mode to collect data for V339 Del, including visual estimates, photoelectric photometry, and both DSLR and CCD imaging.  AAVSO photometry is being used by a number of researchers, and the AAVSO International Database is a valuable source of comparison optical data for multiwavelength observations and spectroscopy.  Both the amount of coverage and the quality of the observations are high, and that's critically important to use these data for astrophysics. 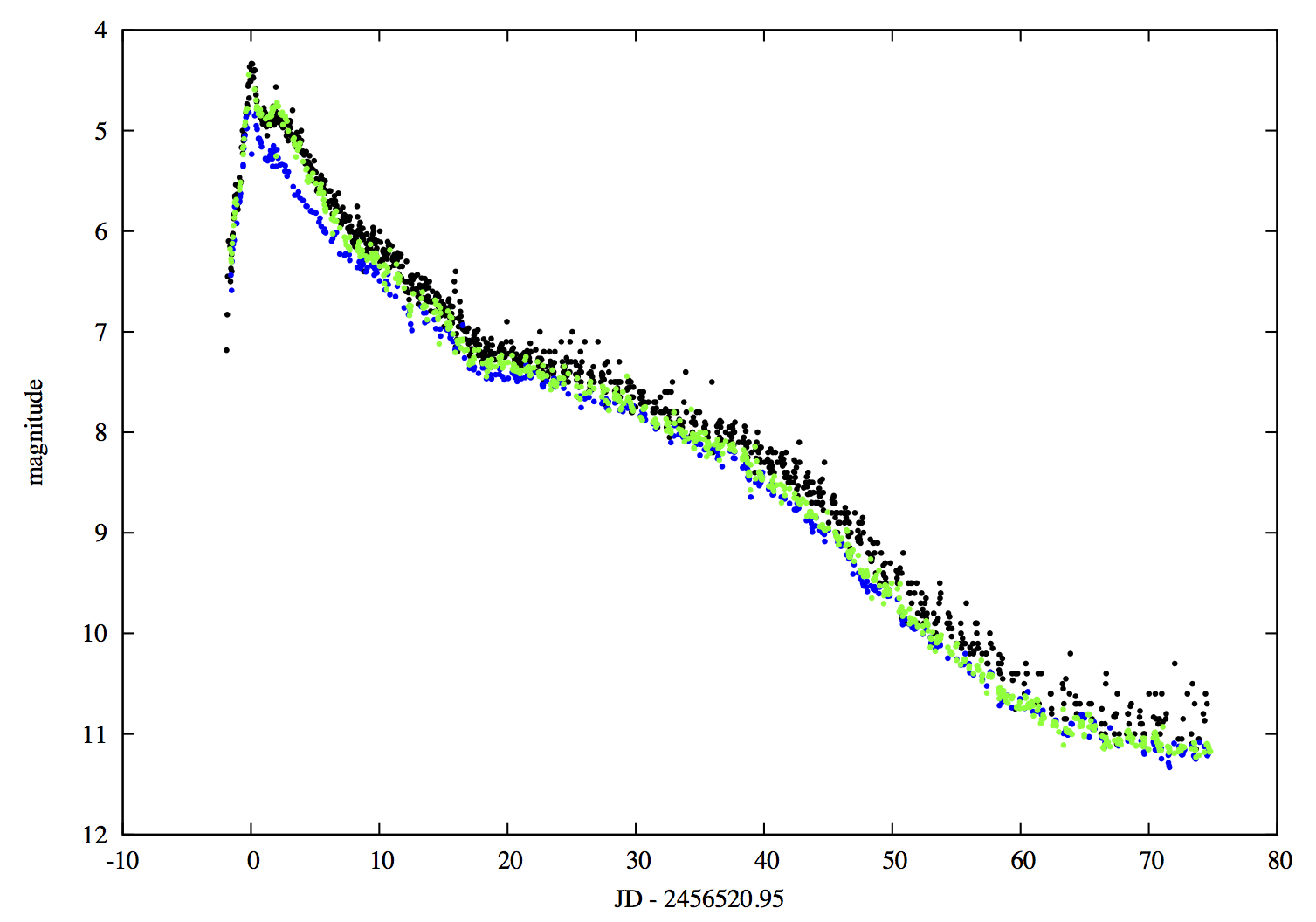 Visual observers had a comparison star sequence to use shortly after the outburst started.  They've done a fantastic job of thoroughly covering the entire nova outburst, and the visual light curve traces the light evolution of V339 Del throughout its entire range.  There are many enthusiastic pairs of eyes pursuing this nova, and we hope you continue well into the decline phase!

The AAVSO is also using V339 Del as an opportunity to educate our observer community on best practices.  Early on in the outburst, AAVSO Director Arne Henden launched a very productive discussion of data quality and calibration for CCD observers, and the quality of CCD data have gotten steadily better over the course of the outburst.  Observers are using this nova as an opportunity to get feedback on their observations and fine tune their observing techniques to produce the best results.  The end result will be more useful data for researchers, both for Nova Del and for other stars too!

There are several common issues appearing in the discussion forum for photometry of this nova.  A few quick takeaways for our instrumental observers are:

V339 Del remains well within range of visual and instrumental observers with telescopes, and should be a good target for the remainder of this observing season at least.  Please keep observing!  Novae are fun objects to follow, but their long-term light curves can also yield new astrophysical knowledge.  The longer the observing community can follow this star, the better our understanding will potentially be.  With so many astronomers around the world looking at so many different wavelengths, this star provides all of us the chance to participate in a very comprehensive community project.  The AAVSO will keep the community updated with news, help and advice for observers, and more on Nova Del 2013.  We expect it to be newsworthy for quite some time!