The AAVSO requess intensive time-series observations of TT Ari during the current fading episode to fully record its behavior during minimum. TT Ari has entered its first faint state since the event of 1982-1985. However, it is exhibiting very high-amplitude (~1 magnitude) periodic oscillations with a period of 0.371 days. This period is of unknown origin; it is significantly longer than the orbital period of 0.137551 days, and is longer than the pulsation periods of white dwarf stars. Continuous photometry of TT Ari will show whether this long period remains coherent.

All observations of TT Ari are encouraged including visual observations. Observers with the capability of performing calibrated multicolor time-series photometry are especially needed; such observations may provide additional physical information about the object that is varying (the primary, the secondary, or the accretion disk). For observers with multiple filters, the suggested priority order is V, Rc, Ic, and B.

There is no fixed duration for this campaign, since we do not know the origin of the periodic variability, or when TT Ari will return to its novalike state. There have only been two well-observed fading events in TT Ari: the 1982-1985 event, and a shorter event in 1979-1980, and neither have extensive time-series data. Observers are encouraged to add TT Ari to their long-term observing programs if possible, and to make time-series observations when TT Ari is well-placed.

TT Ari is located at the following J2000 coordinates:

Charts for TT Ari may be plotted using AAVSO VSP:

Please submit all observations to the AAVSO as "TT ARI". 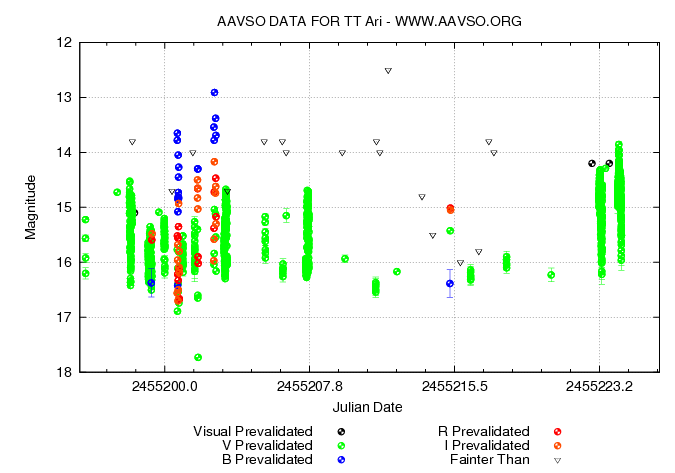 TT Ari continues to exhibit large amplitude flares rising from its minimum light around V=16.4. Observers are encouraged to monitor this object over the long term, including both nightly monitoring and time-series. Time series are particularly needed to help us understand why the star has faded, and what is happening to cause these brief eruptions.

We will be losing TT Ari to solar conjunction within the next few months, so please observe as far into conjunction season as you can, and pick it up again as soon after conjunction as is possible for you.

TT Ari continues its infrequent outbursts, occasionally flaring from its minimum of around V of 16.5 by about a magnitude. There is a hint of the orbital period in Fourier analysis of the last 30 days of data, but the flaring events do not seem to be periodic. In fact, the Fourier spectrum of these data is largely power law, which implies chaotic variability. The autocorrelation diagram shows a weak signal at multiples of about half a day, but that may be due as much to the duration of the flaring events as to their periodicity.

TT Ari has been relatively quiet for the past several days, with only sporadic activity observed. Flares are down at the 1 magnitude level, suggesting much weaker mass transfer. The photometric picture is starting to become somewhat clearer. Now that mass transfer has essentially ceased we are seeing (primarily) the secondary in optical light. The flares of 2 to 2.5 magnitudes are likely to be episodes of sporadic mass transfer from the secondary directly onto the white dwarf. The stream is either crashing directly onto the white dwarf, or it is raining down in clumps, perhaps creating a very short-lived disk. A (very, very) rough back of the envelope calculation shows that the energetics of the flares are consistent with this, at least in optical light. However, a lot more can be learned from spectroscopy, and from observations at other wavelengths. We're looking forward to seeing more on these from Joe Patterson (spectroscopy and ultraviolet) and Koji Mukai (X-ray) in the coming days and weeks.

As of Monday, November 16, 2009, TT Ari remains in its curious "low but active" state. TT Ari is far below its typical value of V=11, and seems to be near V=16.5 or below when it isn't doing anything "interesting". However, it's doing a lot of interesting things right now. It continues to exhibit very large variations of more than 1-2 magnitudes, from V=16.5 to V=14.5 on very short timescales. The causes of this variation remain unknown. Joe Patterson (Columbia U. and Center for Backyard Astrophysics) has initiated an observing program with the GALEX satellite, and this may provide clues for the origin of the large amplitude oscillations.

As of Friday, November 6, TT Ari has faded again, and this time to below its earlier limits; it is now skirting 16.5 to 17.0 at minimum, as faint as it has ever been observed. Our time-series observers are also reporting strong variability is visible again, with amplitudes around 1.5 magnitudes. The fading may have started shortly before JD 2455139.0, and descended rapidly to magnitude 16.5 by 2455139.5. Although there are high-amplitude variations, their periodicity is not yet apparent. Close inspection of time-series data since 2455139.5 shows occasional periods of inactivity with bursts of high-amplitude variations, perhaps due to erratic accretion from the secondary.

As of October 27, 2009, TT Ari appears to be rising again, approaching V=13.0. The large amplitude oscillations have either ceased, or they're being swamped by a brighter and more stable light source in the system. TT Ari showed some incredible behavior during minimum which no one has yet explained.

Both Fourier and autocorrelation analysis clearly show that the large amplitude oscillation had a relatively stable period of around 0.37 days over the time frame of JD 2455118 to 2455125. The orbital period of TT Ari is 0.13755 days; other periods around 0.1328 have also been observed, but never at the longer period. Further, the 0.37-day period does not appear to be any sort of misidentified Fourier sidelobe -- the star really was varying with a period of 0.37 days. It's anyone's guess as to its origin. Could it be pulsation or some other kind of oscillation in the secondary? Some kind of disk instability, or change in the accretion stream? 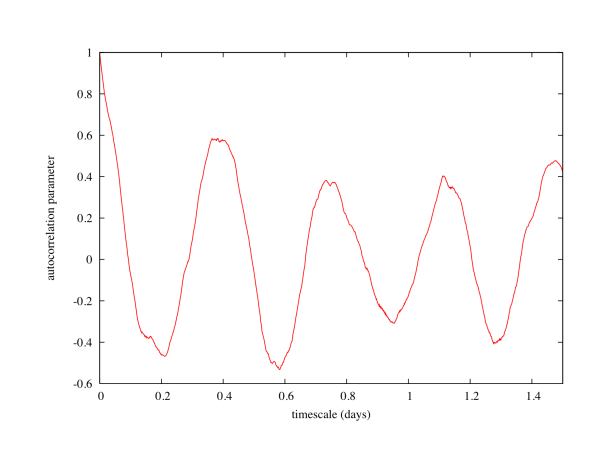 This episode in TT Ari is the best-observed span of time in its history and will provide an incredibly valuable resource for researchers of this star. A deep fading of TT Ari has only been observed once before, and the great event of 1982 was preceeded by a shorter, shallower fade in 1979-1980. Is this a precursor event for another deep, long-term minimum or something totally new? Your observations will help show what's going on, so please keep TT Ari in your observing program as much as possible!

TT Ari is a novalike variable with a high mass accretion rate that keeps its accretion disk perpetually in outburst. However, it is also a VY Sculptoris star; it undergoes deep fading events at random during which accretion from the secondary nearly ceases and the system goes into hibernation. TT Ari probably began its decline to minimum in August-September 2009, and quickly dropped to minimum in early October. Unlike the prior minimum of 1982-1985, TT Ari is showing large-amplitude variations with a period of about 0.371 days (see below), the origin of which is unknown. Superimposed upon these are lower-amplitude irregular variations known as "flickering".