A portrait of a distant Cepheid

We've got some good news from Dr. Keith Noll of the Hubble Heritage Project this week. STScI have been following the AAVSO observations of M31_V1 very closely for the past several months, and they have now tentatively scheduled their sequence of observations based on the AAVSO-derived ephemeris!

We've been following the observations of M31_V1 here at headquarters as well. When I can spare a minute or two, I try to take a look at one of the several interesting objects being observed, and M31_V1 has had my attention for a couple of weeks. I'm hoping to analyze the data and put together a short paper for the first quarter of 2011. As an example of how things are looking, here's a light curve showing data from three observers, two of which I adjusted slightly in zero point to coincide: 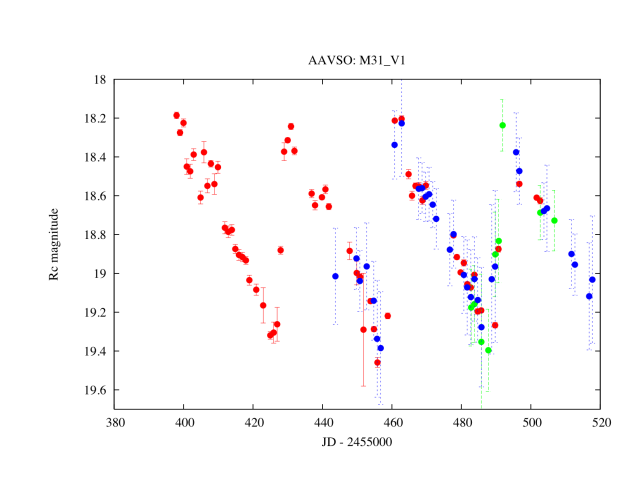 And now here's the resulting phase plot (assuming a best-fit period of 31.414 days), averaged into bins 4% of the period wide: 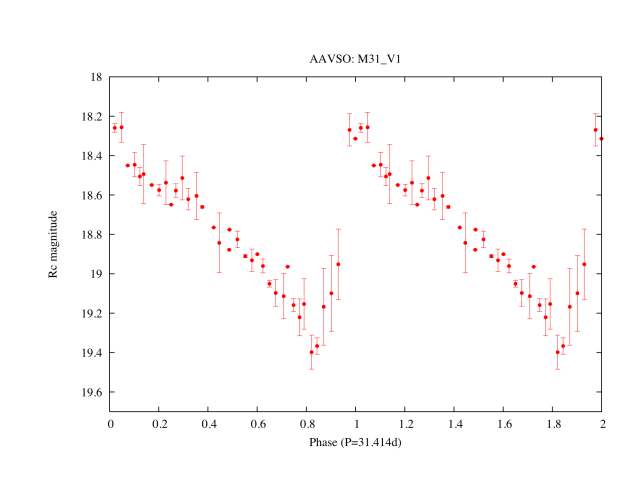 These are rough numbers -- I haven't settled on the period being 31.414 days, or on the exact time of maximum, but I can certainly say it looks like a Cepheid! It's really a great example of the power of the instruments available to the observer community now that you can obtain lightcurves like this. It's a remarkable light curve given how faint the star is (never brighter than R=18.0). It's even more remarkable to think the observers are following something more than two million light years away....

Thanks to everyone who's participated in the project so far! I hope you can keep the light curve going for awhile!