Albert Jones has passed away at age 93.  He was in poor health for the past year, but a recent lung problem was finally too much.  He is survived by his wife of 29 years, Carolyn.

Linda and I met Albert when I was touring New Zealand in 2008, giving lectures at many of the astronomical society meetings. He was up in Wellington for a doctor's appointment, and he and Carolyn were one of the nicest couples that we've come across in years.  Quiet and unassuming, he was far more interested in asking us questions about our trip than talking about his many achievements.

We visited the Jones' again last November, to present Albert with the Honorary Life Membership award (he is also the recipient of the Merit Award and the Director's Award, along with every Observer's Award that we offer).  We spent several hours in their house, talking about what they were currently doing and some of his past observing memories.  Albert was frail in health, but sharp in mind.  He was frustrated that he could not observe any more, but was making sure that all of his older observations were found and submitted to the AAVSO.

His home-made (1948) 12-inch telescope "Lesbet" was taken for the Archives of the Nelson Museum in March, 2012.  In recent years, he had been observing with a lightweight Dobsonian that was presented to him by Alan Gilmore and Pam Kilmartin.  The first observation from Albert in our database is of CP Pup on January 18, 1943; the last observation we received from him was of V766 Cen on August 31, 2011 - a span of nearly 70 years in observing.  We currently have 464K of his observations in our database, with more being added as they are located.

Albert was one of the giants in our field.  Without his observations, our knowledge of the Southern Sky would be far more limited.  He will be missed by all observers! 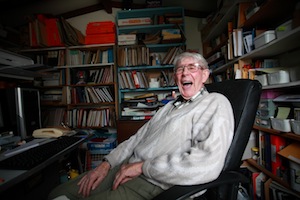