Rotating Variables: Mapping the Surfaces of the Stars

Story #4: Rotating Variables: Mapping the Surfaces of the Stars

The AAVSO observes one prominent rotating variable star intensively -- the sun.  Otherwise, rotating variables are not well-represented in AAVSO observing programs, because their amplitudes are very small -- typically a few hundredths of a magnitude.  Two exceptions are the RS CVn stars, and the young stellar objects, mentioned below.  But rotating variables represent one more way in which variable stars tell us about the nature and evolution of stars.  And they are not rare: there are several 1st and 2nd-magnitude stars in this class -- Epsilon UMa, Alpha And, and Lambda And, for instance.  One of us (JRP) became aware of some very interesting and useful text, images, and videos created by his retired colleague/friend JBR; the result is this short review.

John Rice's website: https://people.brandonu.ca/rice/ The sun is the only star which is close enough for us to see its surface. That surface, or photosphere, is awash with sunspots, magnetic fields, convection currents, and other complex and poorly-understood phenomena. Other stars appear as points of light, but presumably they are as complex as the sun, or more so.  The only way we can "see" their surfaces is through time-series photometry and spectroscopy of their rotational variability.  At some time in the future, we may have large diffraction-limited telescopes which can begin to provide direct images of a few stars.

All stars rotate.  If the star has bright or dark spots or patches, then the brightness and color of the star will vary as it rotates, unless the rotation axis is pointed directly at us, or unless the spots or patches are uniformly distributed around the star.  Simply put: the star will appear slightly fainter when a large dark spot is on the visible side of the star, and slightly brighter when it isn't.   Figure 1 shows a model for the surface of HK Lac, determined from the light and color curves (Frasca et al. 2005). 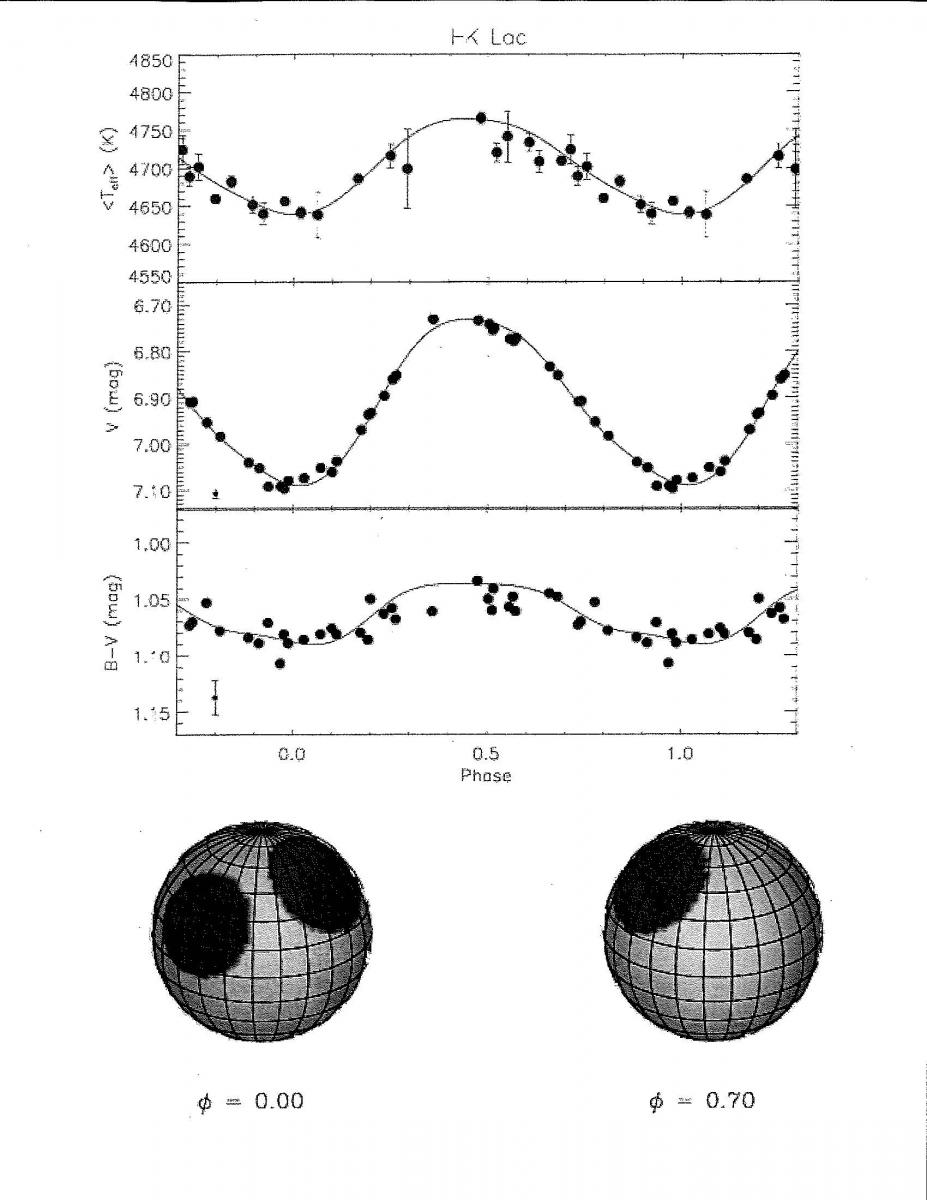 The V light and (B-V) color curves for HK Lac, and the derived spot model, seen at two phases of its rotation.  The top curve is the temperature, derived from the color curve.

In practice, the brightness variations are very small, and are best observed photoelectrically.  Since the rotation period of the star is constant, however, the rotational variability signal can sometimes be detected in visual observations by time-series analysis (Percy and Palaniappan 2006).  Figure 2 shows the Fourier spectrum of AAVSO visual observations of the T Tauri star S CrA, with a period of 6.06 days, and an amplitude of only 0.05 magnitude.  The period was confirmed by self-correlation analysis. 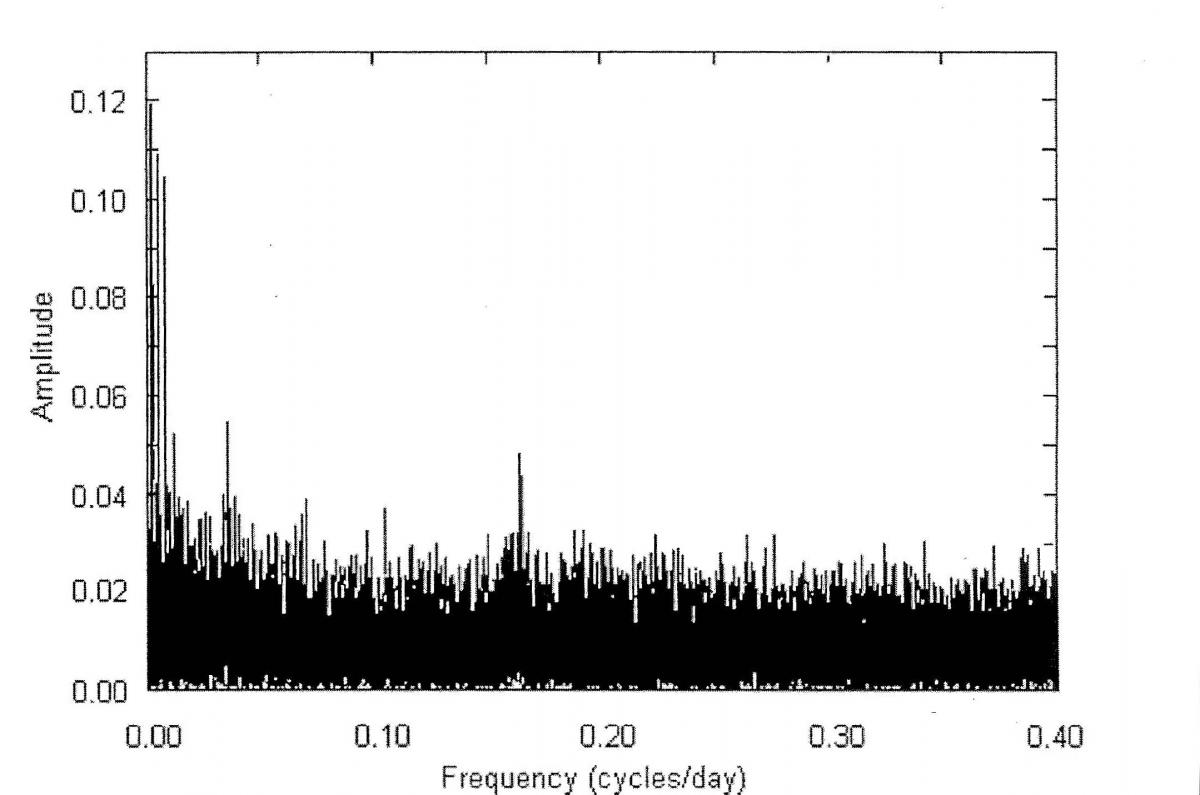 The Fourier spectrum of AAVSO visual observations of the T Tauri star S CrA, a rotating variable with a period of 6.06 days and an amplitude of 0.05 magnitude.

Decades of research have shown that rotational variability is most pronounced in two types of stars: cool sun-like stars, most of which have spots, and hot A-type stars, about ten percent of which have patches. In both cases, the spots and patches are due to magnetic fields, but in different ways.  John Rice's website includes a detailed commentary and references on the videos of both cool and hot rotating variables, described briefly below.

Photometry can provide important information about the rotation and spottedness of a star.  High-dispersion, high-resolution spectroscopy provides even more information, thanks to the Doppler Effect.  If a star is rotating, and the rotation axis is not pointed directly towards the observer, then one side of the stellar disc will be approaching the observer, relatively speaking, and its light will be blue-shifted. The other side of the disc will be receding, and its light will be red-shifted.  The amount of shift will vary across the disc; the star approaches or recedes most rapidly where the equator intersects the approaching or receding limb of the star.

A dark spot on the star will produce a bump in the stellar absorption line which will move across the line as the star rotates, carrying the spot from the approaching side of the star to the receding side, as shown in the following video: https://people.brandonu.ca/rice/files/didemo.mpg

The shape of the absorption line can then be "inverted" (on a computer) to produce a partial image of the disc.  A time-series of spectra will show the rotation of the star, and provide a more complete picture of how spots or patches are distributed on its surface.

In the sun and sun-like stars, spots are caused by concentrated magnetic fields, thousands of times stronger than Earth's.  These, in turn, are generated by the star's rotation, and outer convective layer. The magnetic fields also lead to very hot regions above the photosphere, which produce strong X-rays which have been detected by X-ray satellites since the 1970s.  The magnetic fields can also "short circuit" to produce flares, as on the sun.  Back in the 1970's, these flaring X-rays called attention to hyperactive sun-like stars like the RS CVn stars, mentioned below.

From photometric studies of hundreds of sun-like stars, several things have emerged: (1) they rotate rapidly when they are born, but slow down with age (as we all do); (2) they are more active in their youth, and less so in their old age i.e. in their youth, they have more and larger spots; (3) many stars show activity cycles, akin to the sun's 11-year sunspot cycle.

Since activity is partly generated by rotation, observation (2) follows from observation (1).  Thus, the photometric study of the rotation of sun-like stars puts our sun in context; it is a middle-aged star, with middle-aged rotation and activity.  The rotation decreases with age because the star is undergoing slow mass loss (like the solar wind), and this is carrying away angular momentum.

On the sun, the rotation period is lowest at the equator (25 days) and highest at the poles (35 days).  Therefore, if spots appear at (or migrate to) different latitudes, the observed period will change. Such behavior was observed on Kappa-1 Cet by Walker et al. (2007) using the Microvariability and Oscillations of STars (MOST) satellite. If there are two or three large spots, the light curve will be more complex, but it may still be possible to "invert" the light curve, and deduce the relative sizes and longitudes of the spots (Figure 1). If a spot is near the pole that is tilted toward the observer, then the spot will be visible for more than half a rotation cycle.  If it is near the hidden pole, it will be visible for less than half a cycle. This is visible in the video: https://people.brandonu.ca/rice/files/didemo.mpg

Notice how the latitude of the spot affects the changing absorption line.

These are sun-like stars with unusually short periods and/or unusually high levels of activity.  Many are giants, and most are single, but some are binary.  They may be the result of a merger between two members of a close binary system.  Notable FK Comae stars are: FK Com (G5II, P = 2.4 days) and UZ Lib (K2III, P = 4.75 days).

These have been defined as "binaries with orbital periods between 1 and 14 days, with the hotter component F-G IV-V and strong calcium H and K emission in their spectrum" (a sign of stellar activity), but there are RS CVn stars whose properties lie outside these limits.  They show photometric evidence of large spots, and were a popular target for amateur photoelectric photometry in the 1980s and 1990s.  That's because their behavior was constantly changing as spots grew and decayed, and migrated from one latitude or longitude to another.  See Percy et al. (2001) for a discussion of AAVSO PEP observations of HK Lac, SZ Psc, and lambda And.

See also http://www.aip.de/en/news/science/starspots for an article and an impressive video of the RS CVn star XX Tri, based on the work of Kunstler et al. (2015).

These are cooler stars than the sun -- K and M type.  They are also flare stars, known as UV Cet stars.  Recall that flares are another sign of stellar activity.  One famous example is YY Gem -- Castor C, an eclipsing binary with M1Ve and M2Ve components, and a period of 0.814 day. In addition to eclipses, it shows evidence of spots.  These produce a distortion of the light curve, outside eclipse.  An even more famous example is Proxima Centauri (M5V), the nearest star to the sun, and recently found to be orbited by an earthlike planet.

About 10 percent of B8-F2-type stars on the main sequence are chemically peculiar, as revealed by their spectra.  The prominent elements may include rare ones such as europium, chromium, mercury, and manganese. Dozens of these are naked-eye stars.  Furthermore: the peculiarities vary with periods of a few days, and are accompanied by small brightness and color variations with the same period.  The stars have global (usually dipole) magnetic fields of up to 20,000 Gauss, which vary with the same period -- the rotation period.  Ap stars are therefore "oblique rotators"; their rotation axes are tilted at some angle to the vertical.  As on Earth, the magnetic axis is not exactly aligned with the rotation axis. Keep in mind that the Earth's magnetic field is about one Gauss!

The strong magnetic fields stabilize motions in the outer layers of the stars, and allow the stars' radiation (light) pressure to levitate certain elements up to the visible photosphere.  Other elements will sink downward.  The complex configuration of the magnetic field guides the rising elements into the observed pattern.  These different patches on the photosphere have different light-absorbing properties, and therefore different brightnesses and colors, but they show up clearly in time-series of spectra.  Unlike in sun-like rotating variables, the magnetic fields and patches of Ap stars do not change from year to year.

The following videos show the distribution of oxygen (first video) and chromium (second video) on the photosphere of Epsilon UMa, and how it appears to change as the star rotates (Rice et al. 1997).

The distribution of oxygen on the photosphere of Theta Aur (B9p), with a rotation period of 3.6187 days, is more complex, and quite pretty -- though the colors are artificial -- as shown at: i https://people.brandonu.ca/rice/files/theta.mpg

In the distant future, astronomers may be able to map the molecules in the atmosphere and on the surface of earth-like planets, including oceans, continents, and vegetation!

For a complete list of Professor Rice's videos, see: https://people.brandonu.ca/rice/doppler-imaging-mpeg-videos/