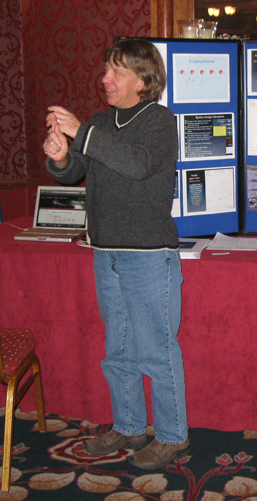 Sara has been working full time for part of each year at the AAVSO since 1990. Her interest in astronomy began in high school where she formed an astronomy club, began making her own telescope, and attended an astronomy camp at the University of Iowa.

Sara then went on to receive her BA degree in Physics and Astronomy from Smith College in 1980, during which time she spent a summer working as an intern at the Maria Mitchell Observatory in Nantucket with Dr. Dorrit Hoffleit. It was through her variable star work there that she had the privilege of being introduced to Dr. Janet Mattei. Along with the other MMO students, she delivered a paper at the AAVSO Annual Meeting that fall.

Immediately after graduation from Smith, Sara worked at NASA's Johnson Space Center in Houston training astronauts in guidance, propulsion, and flight control systems using the space shuttle simulators. During these years, she also became involved as a volunteer with the restoration and sailing of the square-rigged ship, Elissa, in Galveston, Texas. Eventually, she got itchy feet and resigned from NASA to spend the next two years working on a ship in the South Pacific and traveling around Australia.

Upon her return to the US, Sara began working at the AAVSO, tackling any project that Janet had for her. Some of these projects included preparing data for publication, data validation, re-writing the Visual Observing Manual for Variable Stars, and co-authoring the AAVSO Guide to CCD Photometry.

Sara has written several java applications including Zapper, Seqplot, and SunEntry and numerous Perl tools to help with database maintenence. She has worked with with David Benn on VStar, and gets involved with a variety of special projects.

In her spare time, Sara continues to travel and enjoys chasing total solar eclipses with her husband John O'Neill (ONJ).