When the ultraviolet rays from the Sun hit the Earths atmosphere the energy they possess work to knock electrons off of the atoms and molecules that the atmosphere is made up of. These free electrons make up a region of the atmosphere known as the Ionosphere. The region is strongest on the daytime side of the earth since it is dependant on the energy from the solar ultra violet rays.

Very Low Frequency (VLF) radio waves reflect quite well of the underside of this region as they travel from their source, a VLF radio station, to a receiver of the signal. If you monitor the "strength" of the received signal, you will see the strength rise from minimum in the morning to a peak at noon when the sun is highest, and then fall back to a lower level towards sunset. This is a normal quiescent daytime pattern.

When a solar flare occurs on the sun it generates vast quantities of X-Rays that race out at the speed of light (300,000 Km/secand reach the earth eight minutes later. These X-Rays, even more energetic than the ultra violet rays, also work to ionize the upper levels of the atmosphere. They do so more rapidly and with greater strength but the effect is short lived as the X-Ray blast subsides.

The effect on the received VLF radio signal is for its' strength to quickly become greater, then gradually return to normal. This is known as a Sudden Ionospheric Disturbance or SID. They are sometimes referred to as an SES which stands for Sudden Enhancement of Signal. Monitoring the VLF signal provides a way to indirectly detect Solar Flare activity on the sun and its direct effect on the propagation of radio waves by the Ionosphere.

What Kind of Equipment Do I Need to Monitor SIDs? 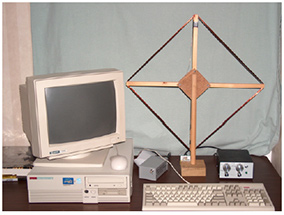 You will need an antenna, and a VLF receiver that converts the signal strength to a DC output. You then need to record the signal for later analysis. In the past this was done with paper strip chart recorders, which some observers still use. But more recently we have moved over to computerized monitoring which requires an Analog to Digital (AD) converter, and an input device by which the computer can read the signal. One option to use a commercial Data Acquisition module which has the A/D Converter built in or you could build a simple AD Converter yourself that could be accessed via the parallel printer port of your computer.

In addition to these pieces of equipment that you will build yourself, you also need to have or have access to an oscilloscope and a signal generator that will produce a signal in the 15 to 60 Khz range. Of course you will also need software to drive the processing. Some of the commercial DAQ Modules come with their own software. Some of the software in use has been developed by some of our observers. You could even develop your own software if you are adept at computer programming. That is all part of the fun of getting involved with the SID program. You have many opportunities for your own creativity and options to pursue this in whatever way you are best able to do so.

What Kind of Skills Do I Need to Get Involved?

If you are going to get involved with SID Monitoring there are some basic skills you will need to effectively set up a monitoring station and begin acquiring meaningful data. A basic understanding of electronics is needed in order to build the receiver from the schematic circuit diagrams provided. You will also need to be able to do light electronic assembly work with a soldering iron on a PC board. You don't have to make the PC board. This can be purchased for a very reasonable price. You need to understand how to work with signal generators, voltmeters, and oscilloscopes. These are needed when tuning the circuit for best reception. Lastly you will to build the antenna which involves some simple woodworking and mechanical assembly.

Computer programming is not necessary unless of course you want to create your own software, but one must be familiar with computers for implementing the computer monitoring. Access to the Web and email is important as most communication among observers is done via this medium.

The AAVSO Solar Committee SID Group serves to collect observations of SID events made by many observers located across the United States and overseas and correlated to one another, in order to monitor and archive the level of solar flare activity as it affects the ionosphere. Monthly counts of SIDhave been made since the 1950. Originally the data was used in connection with Radio Signal propagation forecasting and modeling which was heavily dependent on current flare activity. Today with spacecraft continuously monitoring for solar flares, the SID event data serves more as a gauge of solar activity, similar to the sunspot number, that has a historical past for comparison and will be continued into the future.

Once a prospective observer has put together an observing station and verified its operational status to the SID Analyst, he/she is given an Observer ID code which will be used when reporting data. After that monthly reports of SID events are submitted, in a standard file format, and then correlated to other observers data. The end result is a compilation of correlated events for the month which is archived at the AAVSO and sent to the National Geophysical Data Center (NGDCwhere it is archived with many other solar related data.

The AAVSO web site is the best place to start: Sudden Ionospheric Disturbances

From this page look under the heading "More Information" to access other pages with more detailed information. The following pages should be viewed first.