The highlight of my dog’s day is when we go out to get the mail. As we walk down the driveway, her nose is pointed down as she tries to figure out what critters may have invaded her territory, whereas mine is pointed up towards the sky. On cold winter nights, I always look toward Betelgeuse and think, blow up!! This ritual has been slightly altered this year as I look towards Betelgeuse and wonder, how much dimmer is it than Pollux? Will it get dimmer than Bellatrix? From looking at Alf Ori in LCG2, I’m certainly not the only one doing so. This current dimming seems to be historic, at least to the point in which humans had the ability to record such events. With all this activity, it seemed fitting that Betelgeuse be our Star of the Month.

Sir John Hershel is credited with the discovery of Betelgeuse’s variability in 1836. However, Hamacher (2018) found that at least two Aboriginal Australian tribes had discovered the variability of Betelgeuse far earlier than 1836 and incorporated it into their lore. These tribes also identified the variability of Antares and Aldebaran well before western science. Red was an important color for these societies and the fading and brightening of these stars corresponded to fire magic and lust within the great warriors of the sky. Schaefer (2018) investigated the claims that Aboriginal Australians could make such a discovery and found the answer to be yes. Wilk (1999) investigated different ancient mythologies and found the pre-classical Greeks, ancient Brazilians, and the Lakota have mythologies which could be tied to the variability of Betelgeuse.

Betelgeuse is a well-studied legacy star. An overwhelming number of research papers on the star can be found on arXiv. VSX list Alf Ori (M1-M3.5Iab) as an SRc-type variable. SRc variables significantly differ from other red variables as they are massive, young, extreme Population I stars (Percy 2007). They are rare as well, with only 101 SRc variables currently listed in VSX. Only 59 of these SRcs actually have observations listed in the AID. Betelgeuse has two periods (both of which aren’t sharply defined), which is fairly typical for this class of star. The short period of ~420 days is driven by the star’s pulsation, similar to other pulsating red giants. The long secondary period (LSP) of 2,100 days aligns with circular polarization effects caused by the star’s magnetic field. This magnetic field is likely the driving force behind the star’s large convective cells, and is the cause of the LSP (Mathias et. al 2018). The magnetic field (approximately 1 Gauss) is caused by a small scale dynamo from the star’s rotation, which has a period of approximately 15 years (Tessore et. al. 2017).

Betelgeuse has the largest angular diameter of any star (with the exception of our Sun) due to its massive radius (over 600 times our Sun’s) and relative closeness (~200 pc). This gives us a unique opportunity to study its convective cells because we can resolve it past a point source. Lopez-Artiste et. al. (2018) studied the motion of these convective cells from 2013 to 2018. The infrared images from their study are below. They also found evidence of strong, super-sonic upflows which are dominated by the convective flows. 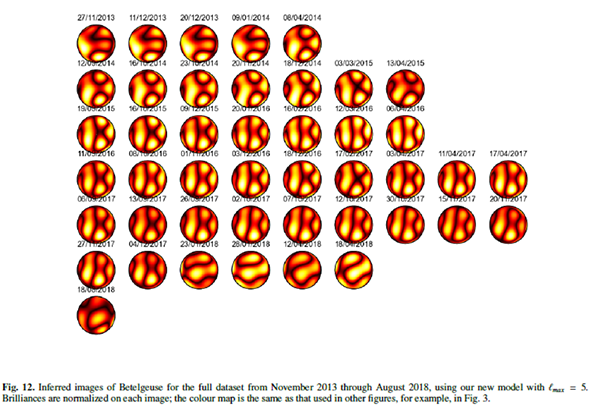 Below are all the visual and Johnson V data found in the AID. On the far right of the graph, the current dip is noticeable.

If you look at recent V and B data, you will see they’re tracking each other. This is typical for pulsating stars as they go through their normal cycle and an indication that the effective temperature of the star is not changing. However, this standard color index may not be totally appropriate since a star like Betelgeuse emits most of its energy in the IR (Percy 2007).

I plotted V data against B-V to show that B-V is holding steady while V drops. SIMBAD lists Betelgeuse’s B-V as 1.77, which agrees with the AAVSO data. 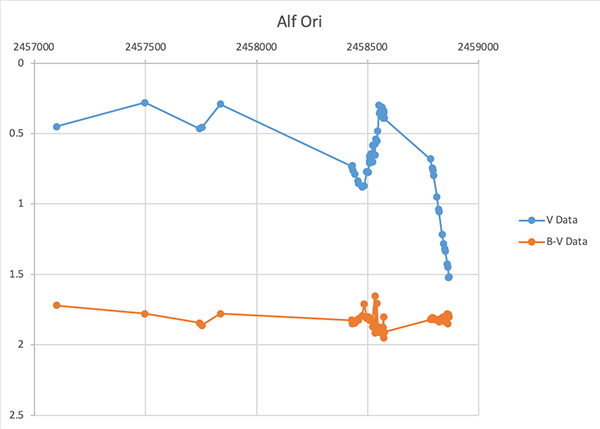 Betelgeuse does not seem to be dimming in the Near IR J and H bands. Robin Leadbeater posted the following on the subject in a AAVSO forum: “I see there is now a recent H,J point in the AAVSO database (the first for over a year). It shows that Betelgeuse is not fading in the IR where most of the flux is so I would venture to suggest there has not been any significant drop in bolometric luminosity, just a small drop in temperature which has produced an exaggerated effect at V mag, a region sensitive to changes in the depth of the molecular absorption bands.”

Is something funny going on? If Betelgeuse’s dimming continues for much longer, then this answer is, probably. ATel # 13410 said the following regarding this unprecedented dimming: “During the 25-years of V-band / Wing Near-IR photometry, Betelgeuse is currently the coolest and least luminous yet observed. Since September 2019, the star's temperature has decreased by ~100 K while its luminosity (inferred from the C-band/m-bol observations) has diminished by nearly 25%. At face value using R'/R = [(T'/T)^4 / L'/L]^0.5 (where R', T' and L' are the current values of stellar Radius, Temperature & Luminosity), this implies an increase of the star's radius of ~9%. However, as pointed out by others, the current fainting episode could also arise from expelled, cooling gas/dust partially obscuring the star. The recent changes defined by our V-band/Wing photometry seem best explained from changes in the envelop-outer convection atmosphere of this pulsating, unstable supergiant. If these recent light changes are due to an extra-large amplitude light pulse on the ~420-day period, then the next mid-light minimum is expected during late January/early February, 2020. If Betelgeuse continues to dim after that time then other possibilities will have to be considered. The unusual behavior of Betelgeuse should be closely watched" (Guinan & Wasatonic, 2019).

Speaking of expelling gas and dust, Betelgeuse has a large, detached circumstellar envelope. Betelguese is losing about 3x10^-6 solar masses per year, which is equivalent to the mass of the Earth. This mass loss has been occurring for about 1000 years, although a second outflow has been discovered which is probably 380 years old (Gorman et al, 2002). Haubois et. al. (2019) studied the winds of these two outflows and found an inner dust shell about 0.5 Betelgeuse radii above the star’s photosphere and an outer shell between 2 and 2.5 Betelgeuse radii out. The outer shell was found to be elliptical in shape and much brighter in the Mid-IR than the Near-IR, possibly due to light scattering from SiO and Al2O3 molecules found in the dust shell. LeBerte (2012) mapped the H1 regions of the shell with the VLA and found the shell to extend out to 0.24 pc. The shell is elongated along the proper motion of the star, as shown below. 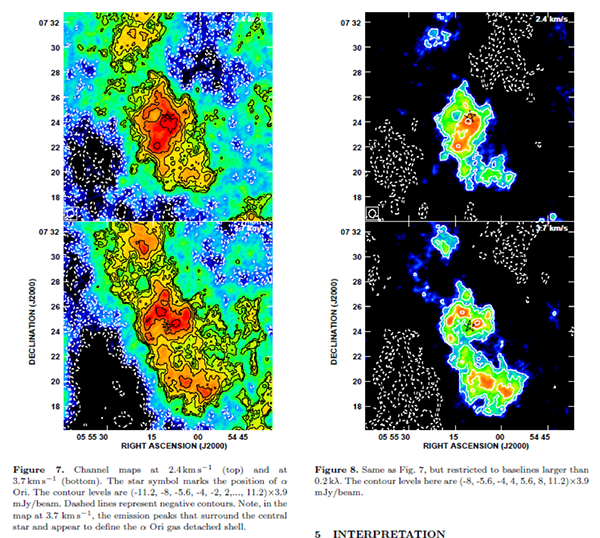 Of course, what we really want to know is, when will Betelgeuse explode as a Type IIP supernova and leave behind a neutron star? Knowing Betelgeuse’s zero-age main sequence mass (ZAMS) will go a long way to determining this, and estimates vary. Definitive estimates are difficult because Betelgeuse cannot be directly linked to the nearby Orion Associations. Most models return a 14 solar mass, OV9 main sequence progenitor; however, these models do not account for rotational effects (Posson-Brown et. al., 2007). Most red super-giants (RSG) rotate at around 1 km/s; however, Betelgeuse rotates closer to 15 km/s. The reason for this rapid rotation in unknown. Wheeler (2016) compared non-rotational models and rotational models and found Betelgeuse returns a more massive main sequence progenitor when the rotational effects are accounted for. Due to uncertainties in various parameters used in the model, his group constrained the ZAMS mass to between 16 to 23 solar masses, with some of the best agreements in the 19–20 solar mass range. Betelgeuse is likely in a helium burning state and has undergone one dredge up, so we still have a ways to go as it ascends up the red super-giant branch. When Betelgeuse does explode, we will be ready. The Super-Kamiokande neutrino detector (pictured below) in Japan has recently undergone upgrades, and is expected to detect 200 neutrino events from stellar core collapses per year. The detector has been calibrated so that it signals an alarm about 12 hours prior to a core collapse in a 15–25 mass progenitor about 200 parsecs away, values which should sound familiar by now (Simpson, 2019). Still, it looks like the dog and I may be waiting a while for an eventful trip to the mailbox, but you never know. 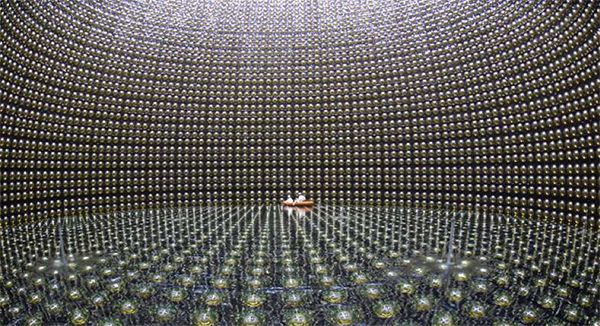 Australians. The Australian Journal of Anthropology. 29, 89-107.

of Angular Diameter of M Giants: An Observational Perspective. arXiv:astro-ph/9911076v1.

Field of Betelgeuse from 2009-2017. Astronomy & Astrophysics manuscript no.

Schaefer, B. (2018). Yes, Aboriginal Australians Can and Did Discover the Variability of Betelgeuse.