V838 Monocerotis: the central star and its environment a decade after outburst 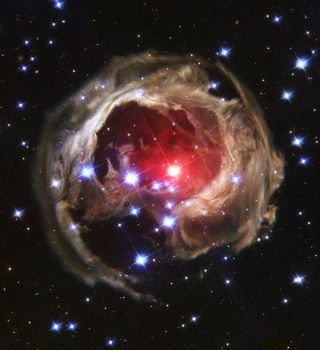 Aims. V838 Monocerotis erupted in 2002, brightened in a series of outbursts, and eventually developed a spectacular light echo. A very red star emerged a few months after the outburst. The whole event has been interpreted as the result of a merger. Methods. We obtained near-IR and mid-IR interferometric observations of V838 Mon with the AMBER and MIDI recombiners located at the Very Large Telescope Interferometer (VLTI) array. The MIDI two-beam observations were obtained with the 8m Unit Telescopes between October 2011 and February 2012. The AMBER three-beam observations were obtained with the compact array (Bâ¤35m) in April 2013 and the long array (Bâ¤140m) in May 2014, using the 1.8m Auxiliary Telescopes. Results. A significant new result is the detection of a compact structure around V838 Mon, as seen from MIDI data. The extension of the structure increases from a FWHM of 25 mas at 8 {\mu}m to 70 mas at 13 {\mu}m. At the adopted distance of D = 6.1 ± 0.6 kpc, the dust is distributed from about 150 to 400 AU around V838 Mon. The MIDI visibilities reveal a flattened structure whose aspect ratio increases with wavelength. The major axis is roughly oriented around a position angle of â10â¦, which aligns with previous polarimetric studies reported in the literature. This flattening can be interpreted as a relic of the 2002 eruption or by the influence of the currently embedded B3V companion. The AMBER data provide a new diameter for the pseudo-photosphere, which shows that its diameter has decreased by about 40% in 10yrs, reaching a radius Râ = 750 ± 200 Râ (3.5 ±1.0 AU). Conclusions. After the 2002 eruption, interpreted as the merging of two stars, it seems that the resulting source is relaxing to a normal state. The nearby environment exhibits an equatorial over-density of dust up to several hundreds of AU.

Read the paper on astro-ph