We received some sad news at the AAVSO ten days ago regarding one of the participants in the AAVSO's project to digitize data from the Harvard Annals. Daniel Rupp wrote me to let me know that his son, Andrew Rupp, passed away on January 7, 2011. Along with this news, Mr. Rupp passed along the spreadsheets that Andrew had in progress. All told, Andrew digitized more than 2700 observations for 10 different Mira variables, extending our light curves for these stars backwards in time by nearly eleven years. 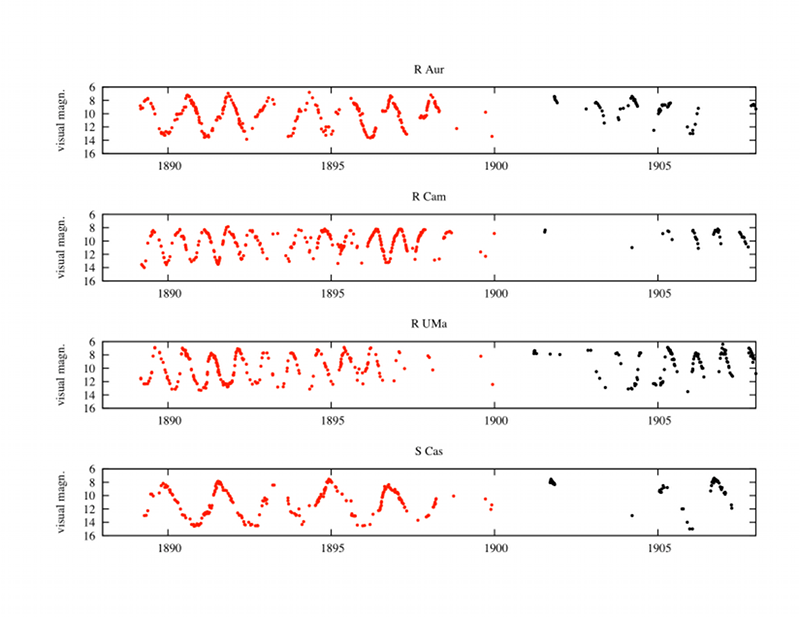 These light curves show examples of the work he contributed; the newly-digitized data are shown in red, while the existing observations from the AID are in black. These "new" observations came from astronomers and their assistants at the Harvard College Observatory working at the end of the 19th Century. The observations were archived on paper in Harvard's publication, Annals of the Harvard College Observatory, but were never entered into the AAVSO's own records. Through Andrew's work, and the work of the other volunteers, these data are slowly being given new life in the AAVSO International Database.

I began a brief correspondence with Andrew in September of 2010 when he emailed to ask whether he could volunteer. By mid-October we selected one of the Harvard Annals issues, and his first spreadsheet with data from T Cas arrived on October 25. We received two more sets of data on November 20 and December 23. Within two weeks, we were notified of his passing. Andrew wasn't a member or observer of the AAVSO, and he didn't mention how he learned about this project or why he was interested in helping out. But regardless of the circumstances by which he came to work with us, he made a valuable contribution to the AAVSO and its mission, and we greatly appreciate his work.

The AAVSO extends its condolences to Andrew's family, and thanks Andrew and his father, Daniel, for furthering the work that we do.