Common knowledge tells the astronomer that RR Lyrae stars are nice, regular, pulsating variable stars with periods from about an hour to a little over a day. For the most part, common knowledge is even right — follow your typical RR Lyrae star for a couple seasons and you will see it calmly increase and decrease in brightness with the same period and magnitude for cycle after cycle. But, common knowledge only describes common stars. Some RR Lyrae stars, like XZ Cygni (August, 2002 VSOTM), are complex, multi-periodic objects that have different light curves from cycle to cycle and year to year. AH Leo is one of these complicated stars, and it needs your help to be fully understood.

Listed in the GCVS simply as type RR with no known period, AH Leo was first observed in earnest by Dr. Horace Smith of Michigan State University and a class of observational astronomy students during the 1993 spring semester (Smith, 1993). The star was selected as an easy target for performing real science in short order, and a goal of determining the star's period by the end of the semester was set. Unfortunately (or perhaps fortunately) this little giant had other plans. After wrestling 130 hard won observations out of 77 Michigan nights, this class and instructor discovered that an easy answer was not to be found. While the class was able to identify a primary period of 0.46-days this didn't completely describe the star's behavior. Apparent in their light curve (figure 1) was an amplitude modulation characteristic of the Blazhko effect.

In 1907, Sergei Blazhko noted that some RR Lyrae stars' light curves have variable maximum amplitudes and a changing slope in their rise to maximum light. The brightest star to have this light curve anomaly is RR Lyrae itself, which has a primary period of 13hr36min and a Blazhko cycle of about 40 days. The Blazhko effect itself is also variable, and it modulates the stars maximum amplitude differing amounts during its own 4-year cycle (Smith et. al 2003). The Blazhko effect is most often found in the RRab type of RR Lyrae stars.

Pulsating variable stars can pulsate in many different ways, just like sound can resonate in a cavity in many different ways. In RR Lyrae stars this manifests itself as two distinct light curve shapes. In the fundamental mode, which is like a wave with no nodes in a cavity (figure 2), the star has a higher amplitude and longer period than in the first-overtone mode, which is like a wave with a single node. Fundamental mode pulsators are called RRab RR Lyrae stars and first overtone pulsators are called RRc RR Lyrae stars (figure 3). Stars that pulsate in both modes at once are called RRd or double-mode RR Lyrae stars. The Blazhko effect is found in 20-30% of RRab stars and in about 5% of RRc stars (Szeidl 1988; Moskalik & Poretti 2002). 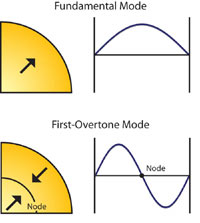 Figure 2: Stars pulsating radially in the fundamental mode move in and out as a continuous whole, while first-overtone mode 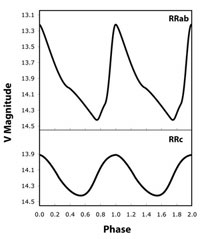 pulsators pulsate about a node, with part of the star expanding while other parts contract.

Detailed studies of stars with the Blazhko effect show that it causes the amplitude of maximum light to vary by several tenths of a magnitude over the course of several tens of a day (figure 4). At the same time, the Blazhko Effect itself appears to come and go from year to year (Smith et al. 2003), and sometimes disappears entirely

No one is exactly sure what causes the Blazhko effect. The two leading theories are a resonance model and a model involving magnetic fields. Both models involve a mixing of radial pulsations and non-radial pulsations. With the normally observed radial pulsations, the entire surface of the star moves together. With non-radial pulsations, some of the star's surface moves in while other parts move out (figure 5). How a star pulsates is described by the number of nodes parallel to its axis, called the l-number, and perpendicular to its axis, called the m-number. The m-number describes the number of modes both above and below the equator.

With the resonance model, most theories predict either l=1, m=1 or both the l=1 and m=1 modes are excited (figure 6) (Cox 1993; Van Hoolst et al. 1998; Nowakowski & Dziembowski 2001). As the star rotates, different parts of the surface become visible, and the observed amplitude depends on what part of the star is observed, and the rate of the amplitude modulation is related to the stars rotation rate. Unfortunately, the rotation rate of RR Lyrae stars isn't easily observed and hasn't been directly determined for any stars yet. 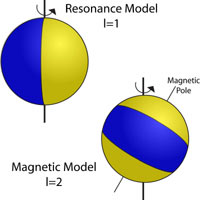 Figure 6: Both the resonance Model and Magnetic Model include non-radial pulsations which cause different parts of the stars surface to move in different ways. The observed amplitude modulation thus is a reflection of what part of the star is being observed, and its period is defined by the stars rotation rate.

Sorting out exactly which model is true is work for the future. It will require careful analysis by both theorists who build the pulsation models from the inside out, and observers who use spectra to probe stars from the outside in. In the next few years, it is hoped that new large telescopes, with new powerful spectroscopes, will be able to detect or rule out the presence of magnetic fields in RR Lyrae stars and determine the explanation behind the existence of the Blazhko effect. Until these observations are made, the mystery will remain.

While high-resolution spectra may have the final word, they won't have the only word, and detailed observations of the Blazhko effect are needed to understand all the things going on in affected stars. Careful observations of RR Lyrae stars show period changes and phase skips that can't be explained by evolution effects alone. Some stars also experience changes in the shape of their light curves, with bumps coming and going from year to year for unexplained reasons.

AH Leo fits this pattern of misbehavior perfectly. Since 1993, it has been observed in varying detail in 1994, 2004 and 2005. The data from all 4 seasons can't be perfectly fit with the same period, and the overall shape of the light curve has slowly changed (figure 7). Unfortunately, due to weather problems, complete observational coverage over an entire Blazhko cycle has not been obtained. It is hoped that the AAVSO observers this season can answer several specific questions: How quickly does the amplitude of maximum light change? What are the maximum and minimum amplitudes? How do the bumps and wiggles during minimum light change? 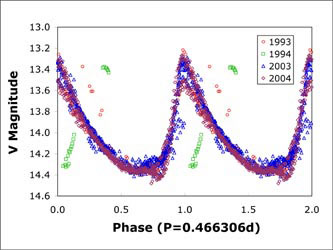 Figure 7: AH Leo observations over 4 seasons. Note that the 1994 data is clearly out of phase, and the shape of the light curve during minima changes between 2003 and 2004.

To answer these questions well we need observations with excellent time sampling for an entire season. This is where you and the AAVSO can make good science possible.

AH Leo rises from and falls back to a minimum magnitude of about V = 14.35 every 0.466 day and the period is slowly evolving. Roughly every 25 days AH Leo's Blazhko cycle repeats itself, causing the star's amplitude to vary from ΔV = 0.5 to 1.2 magnitudes. To understand the star's every rise and fall, we need to observe each of these two cycles in detail. Perhaps most importantly, by covering the Blazhko cycle for multiple consecutive cycles we can say with certainty what repeats (or fails to repeat) when, and identify any additional, previously unknown, longer periodicities.

While observations of RR Lyrae stars often focus on the ascending branch and maximum light, we ask that observers please obtain images of the star during all phases so that Fourier analysis can be used to fit the star's light curve. This method works best when the entire curve is well sampled. We are also very interested in any bumps that may appear during the descending branch of the light curve, and changes in the shape of the light curve during minimum light.

Filtered CCD observations in all optical bands are welcome, but V-band observations are preferred. Finder charts will be posted on the AAVSO website soon. AAVSO council member Pamela Gay is organizing this observing campaign, and will be using the data to write a paper this summer. See your data in print, and submit a data point (or two, or two thousand) and become a part of the next, best study of an RR Lyrae star.

P.S. And remember: to keep the AAVSO data submission number on its ever-growing exponential climb many million observations must be made this year. Some say it can't be done. Prove the neigh sayers wrong while doing significant science! Set your CCD observing, and set a new AAVSO record.

This month's Variable Star of the Season was prepared by Dr. Pamela Gay.