The Be class displays an heterogeneous zoo of light curves. From completely irregular to strictly periodic, from rapid outbursters to smooth sinusoids. The most likely explanation for such a diversity is that there are a different number of causes for the light changes shown by this type of stars.

The three main causes proposed are:

Also radiative pressure and magnetism may play a role (Meilland et al., 2011) but especially on the early type B stars.

Rapid rotation is a confirmed feature of Be stars. They may rotate as fast as 500 km/s (typically >250 km/s). Compare that with the Sun’s 2 km/s!  This extremely fast rotation speed causes the star to lose matter from its equator with the consequent formation of a disk surrounding it. This disk is the source of the emission lines we see in a Be star spectrum (Fig. 1) and of its infrared excess. 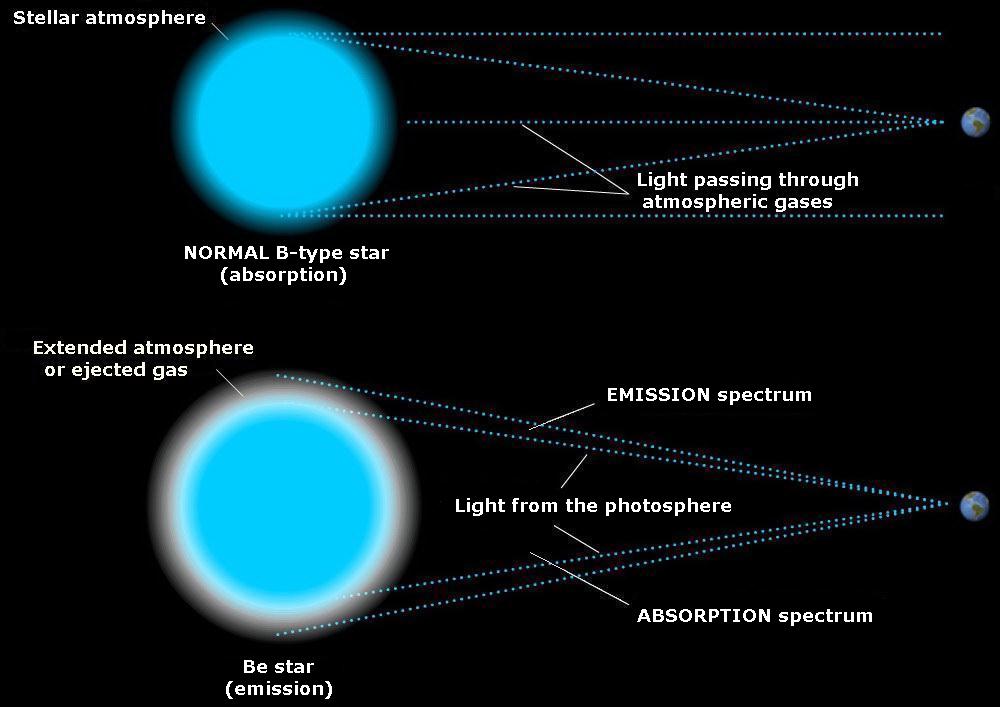 Fig.1- The Be star phenomenon: a disk surrounding the star is the source of the emission lines (Credit: Enzo De Bernardini)

These stars are classified as “BE” in the General Catalogue of Variable Stars (GCVS). The BE class includes variability not related to shell events. In the literature they are known as lambda Eridani stars. They are Be stars showing periodic variations (0.3 to 2 days) that may switch from single to double-wave modes and with amplitudes smaller than 0.05 mag. The cause of the variations may be non-radial pulsations, rotational modulation (bright spots) (see Balona, 1990) or clouds close to the stellar photosphere (Carrier and Burki, 2003)

When the emission line outbursts are accompanied by optical variations, the stars are classified as GCAS. The class is named after the prototype star, gamma Cassiopeiae, which underwent a famous outburst back in 1937.

In a GCAS, the quiescent state is defined by the star’s magnitude when there is no disk around it. For some stars this never happens and we see continuous variations (see fig. 2), but others are more quiet and spend years peacefully shining constantly (see fig. 3) The kind of light curve mostly depends on geometry.

Fig.2- Light curve for theta Circini, one of the GCAS stars with the largest amplitude and continuous variations instead of well-determined outbursts. Visual observations and data from the Hipparcos satellite are presented.

Fig.3– The light curve of the B5e star HD 174775, discovered by the author data-mining the ASAS-3 database. This star spent several years in a constant state and woke up in August 2009. This is an example of a star seen pole-on.

Stars seen pole-on = they show brightenings when the H-alpha outbursts take place. They are photometrically redder when brighter because of the H-alpha contribution of the cooler gas. The already mentioned case of HD 174775 is a good example.

Stars seen equator-on = the disk is blocking part of the star’s light so their outbursts translate to fadings visually speaking and they are redder at minimum because that’s when the disk is present.  Pleione and V1294 Aql (fig. 4) are the most famous examples.

Intermediate cases = They usually show no conspicuous light variability or may show both brightening and fadings, but there are remarkable exceptions, like the prototype star gamma Cas!

The light curves of the outbursting objects are rather heterogeneous. A paper by Keller et al. (2004) including MACHO data for LMC blue variables lists five types of light curve morphology:

Different modes may co-exist in the same star at different times. Type 5 corresponds to the equator-on stars.

Fig. 4- Light curve for V1294 Aql including visual and V-data from ASAS-3. The ASAS-3 observing cadence was switched to continuous mode to help covering the 2003 fading, typical of an equator-on star and that can be classified as a type-5 event according to Keller et al. light curve morphology.

The discovery of delta Scorpii’s variability

On June, 2000, I was conducting a routine exercise consisting of making several brightness estimates of constant stars in order to compare the results with photoelectric V values and improve the visual accuracy. Those observations were made using naked eye stars and under different conditions. One of the exercises involved stars of similar magnitude but different colors.

On the night of June 26, the stars chosen were delta Sco (a blue star with V= 2.32) and epsilon Sco (an orange star with V= 2.29). The observation was made under twilight so the orange star should be clearly brighter than the blue one, that should be suffering from poor contrast against the sky background. However, the result was the opposite. This prompted me to make an “official” estimate of delta Sco’s brightness and the result was V= 2.24, almost a tenth of a magnitude brighter than its normal state.  Since I had been observing that sky area for several weeks, I remembered that delta Sco had been looking more or less the same over that period but since I had not paid more attention to the results, I hadn’t made the actual discovery before.

On June 30 a first alert was sent to the Japanese mailing list VSNET to look for confirmation from other observers. Meanwhile, observations continued every clear night.

On July 17, the star was already brighter than Nunki (sigma Sgr, V= 2.09) so the outburst had been confirmed. Delta Scorpii was copycatting gamma Cassiopeiae, the prototype star of the GCAS class of eruptive variables.

On July 20, spectroscopic confirmation came from the Skinakas Observatory, Greece, where P. Reig observations showed the H-alpha line in emission. The results were published in an IAUC by Spanish astronomer Juan Fabregat together with Reig and myself.

At this point reports were sent to all variable star organizations including the AAVSO and observers around the world started monitoring the outburst and witnessing how the appearance of Scorpius radically changed over the following years. 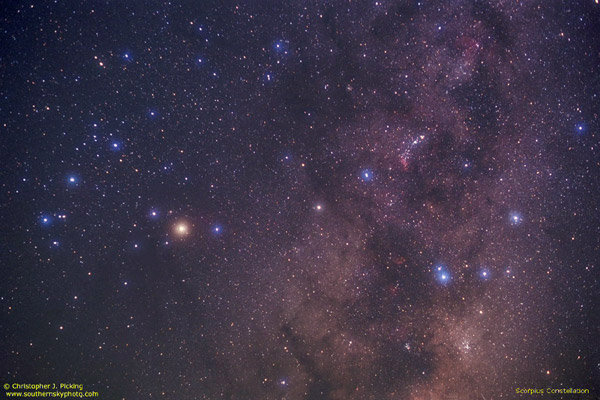 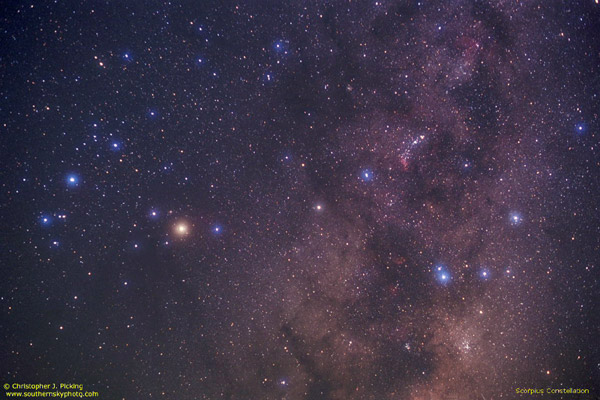 This  image of the constellation Scorpius (courtesy of Christopher J. Picking from New Zealand) has been modified to show how the star looked when it was at its normal magnitude (left) and when it brightened 0.7 magnitudes to become even brighter than Shaula (right), one of the stars at the Scorpion’s stinger.

Is the binary companion responsible for the enhanced activity?

Delta Sco is actually a binary system.  The most up-to-date modelling of the system (Meilland et al., 2011) says that its components are a hot B0.3IVe primary (the variable star) and a B3V companion in an eccentric orbit with a period of 10.811 years.

The first time emission lines were seen in delta Sco’s spectrum was in 1990, when Cote and van Kerkwijk(1993) observed weak emission on the flanks of the H-alpha line core in absorption.  The Hipparcos satellite also observed the star 0.03-0.04 mag. brighter during 1990-1991 with a slow fading afterwards. Periastron passage according to the current ephemeris took place on November 1989 so the enhanced activity is not surprising.  The role of binarity -at least in the case of delta Sco- seems to be confirmed.

Since the very beginning of the outburst, supporting photoelectric and CCD-V photometry have been conducted by several observers, specially by South African amateur astronomer Brian Fraser. Thom Gandet and Doug West from the US also joined the observing campaign and the results obtained were published in IBVS 5026 (2000) and IBVS 5352 (2002).

In 2002 a very rapid brightening that took place exactly during solar conjunction was not missed due to the help of the Galileo spacecraft that, not only observed Jupiter and its satellites, but also helped monitoring bright stars like delta Scorpii and delta Velorum by means of its star scanner (check out Paul Fieseler’s site to learn more).

The outburst peak in 2003 (see Fig. 5) was also observed visually by another Argentine observer, Federico Claus, and more recently other observers have been contributing data: Jeff Hopkins (US) and Terry Moon (Australia). Terry, Brian and Doug have also made B observations that confirmed that the star got redder when brighter.

Fig. 5- Light curve of delta Scorpii since the beginning of the eruption until July 2011, a complete orbital cycle.

Delta Sco peaked at V= 1.59 in 2003.  Gam Cas had risen to a visual magnitude of 1.6 but from a quiescent state of V= 2.2 so the delta Sco outburst turned out to be even more impressive than the one that gam Cas underwent. However, since the northern star is seen at an intermediate orientation, it has displayed a shell spectrum sometimes and its brightness has faded down to 3rd magnitude after its initial brightening because the disk occulted part of the photosphere’s light.

Since the beginning of its active state and up to 2011, delta Sco hasn’t been fainter than its quiescent magnitude (V= 2.3) but it has experienced some short-term fading events. Some of them seem to be superposed but independent of the mean magnitude trends: once the star recovers, the mean magnitude keeps rising at the same rate as before the fading started. The one around JD 2455100 is the most important of these.

Delta Sco has a low inclination (35º) and according to Carciofi et al.(2006) even if the disk was completely opaque it could only block 10% of the star’s light. They give two hypotheses to explain the fadings:

The strength of the emission lines shows a clear anti-correlation with the visual brightness during the mid-term (60 d.) cycles (see fig. 6) but a positive correlation in the long term. An exception is the big 2005-2006 fading (when the system dropped from 1.7 to 2.3 to slowly recover after that) that showed a clear anti-correlation and reversed the long term trend between JD 2453400 and 2454400. Then the mean trends were again in agreement (see fig. 7).

One thing still to explain is the presence of these large amplitude (0.2-0.3 mag.) 60 days-variations during the fainter state. This 60 d. period was present at other stages of the eruption but the light variations seem to be more erratic when the star reaches its bright state. 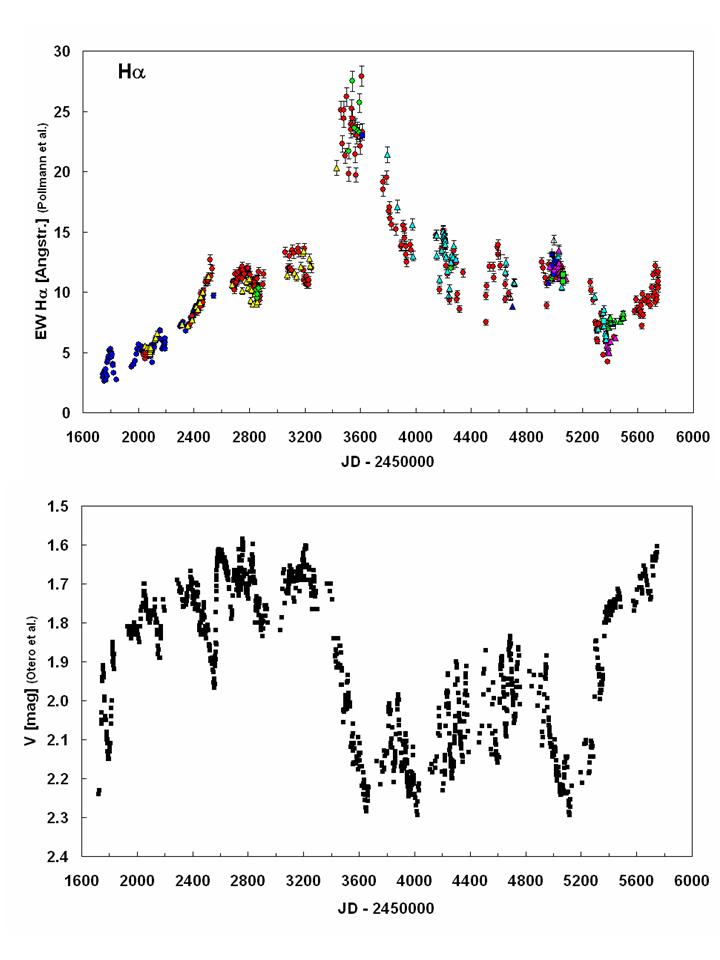 Fig. 7- Comparison of the time behaviour of the H-alpha equivalent width and the visual brightness. The type of correlation (positive/negative) between both is changing within the entire time span, depending on the physical and geometrical properties at a given time. Courtesy: Ernst Pollman.

Although visual observations of this star may be useful, they should be made with special care due to its small amplitude.  Due to its brightness, comparison stars are not easy to fit in a standard chart.

A chart with photoelectric V-magnitudes for the comparison stars can be found at this link.  Northern observers may also add alpha Oph (V= 2.08; B-V= 0.16) to the list.

Multicolor photoelectric or CCD observations are encouraged since they would give more accurate results and help constrain the disk models.  Delta Sco may break its own brightness record after the 2011 periastron, so don’t miss it!  And as always, submit your data to the AAVSO!

The July 2011 Variable Star of the Season was written by Sebastian Otero.