The term "sunspot" appears in the news, often in connection with stories on aurorae, electrical outages, and problems with orbiting satellites.  But often these stories don't really explain what sunspots are and why they're of interest to us on Earth.  So what are sunspots?

That's what they appear to be when we observe them, but what are they?  What is their physical cause?

Why the Sun Shines

To understand sunspots, you have to understand a little about why the Sun shines.  Heat is generated deep inside the Sun from the nuclear fusion of hydrogen atoms into helium.  This process liberates lots of energy, but because the Sun is so large, it takes a long time for the energy generated deep inside to propagate outwards.  It's the heat left over from the nuclear fusion process that makes the Sun's surface so hot.

The outermost layers of the Sun's interior behave like a pot of boiling water.  In a boiling pot, you have the stove burner providing the heat; heat gets transferred to the water at the bottom of the pot, which then rises.  Once the hot water gets to the top of the pot, it cools and sinks back to the bottom of the pot.  This happens over and over again for as long as the stove is turned on (and you have water in the pot).  In the Sun, it's a similar process.  Hot gas deeper inside the Sun rises, and by doing so it transfers heat to higher and higher layers; we say that heat is being transferred convectively rather than radiatively.  When astronomers take a high-resolution picture of the surface of the sun, we see millions and millions of tiny granules, each of which is a small convection cell that transmits heat from just under the surface to the surface itself, where the hot material then radiates its heat into space. 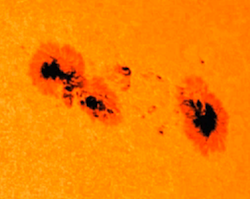 Sunspots, solar activity, and the Earth

What makes sunspots so interesting to us is they're associated with lots of other activity on the Sun, some of which can affect the Earth.  The strong magnetic fields that cause sunspots can be energetic enough to generate solar flares or even lift material off the Sun's surface!  These energetic phenomena sometimes have consequences for the Earth, because they may generate X-rays or launch storms of energetic particles into interplanetary space, both of which can affect the Earth and its near-space environment.

One of the most notable effects can be the generation of aurorae.  Over time, particles from the solar wind are trapped in the Earth's magnetic field, and when there is a solar outburst these trapped particles are re-energized. The particles funnel down the magnetic field down into the atmosphere, where they collide with molecules in our atmosphere and excite the atmosphere into emitting light of different colors (red and green being the most common).  Aurorae are most common at high northern and southern latitutes (because that's where the Earth's magnetic poles are), but during an active solar cycle, we sometimes see aurorae much further south.  The strongest solar storms can even disrupt electrical power grids on Earth, and they may also endanger orbiting satellites or the space station.  While the temporary disruptions that solar activity can cause to satellites and electrical grids can be a nuisance, sunspots have little or no effect on our day to day lives and have no physiological effect on people or other living creatures on the Earth's surface.  However, you may feel very lucky if you get to see a beautiful aurora in your nighttime sky!

Individual sunspots may come and go on timescales of days or a few weeks, but the number of sunspots visible on the Sun's surface increases and decreases on a regular cycle of about 11 years.  This 11-year cycle, the Solar Cycle, was discovered through the regular observation of sunspots by solar observers over several centuries.  At the time this article is being written the Sun is approaching a new "solar maximum" for the current cycle; it should happen some time in 2013, after which the number of sunspots will slowly decline over the next several years.

AAVSO Solar observers are helping us understand sunspots and the behavior of the Sun with regular observations, and their data are even more important now with the imminent solar maximum.  We encourage all solar observers to safely enjoy the nearest "variable star" to Earth over the coming months!

Safety note: The Sun should only be observed using specialized equipment.  It is possible to permanently damage both your eyesight and your telescope by looking directly at the Sun -- never, ever look directly at the Sun through any optical device like binoculars or a telescope unless it is equipped with safe and well-tested filters specifically designed for doing so.  If you do not have equipment or experience observing the Sun, you should seek assistance from experienced solar observers first.  All observers should follow our Guidelines for Solar Observing, particularly if you are actively recording and reporting sunspot activity to the AAVSO Solar Program.

Additional Information:
- Sunspots and Pores - A presentation written by Frédéric Clette, SILSO Director, Royal Observatory of Belgium (Co-Organizer; Construction of the International Sunspot Number). He delivered this and other talks on recognizing the difference between groups, sunspots and pores, at various SSN workshops.