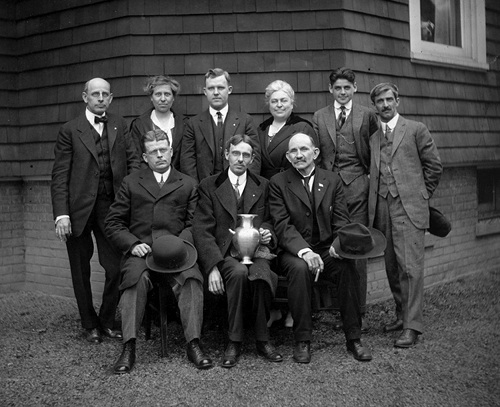 The William Tyler Olcott Distinguished Service Award—Initiated in 2000, this award is presented to a member of the AAVSO organization for outstanding contributions in mentoring/promoting variable star astronomy.

"... for his promotion of variable stars and astronomy; his AAVSO membership since 1997 and over ten years of service on the AAVSO Council/Board; his pioneering work in photoelectric photometry, and the creation of the Landolt Standard star fields, which established a firm photometric foundation used by both professional and amateur astronomers; his leadership in the IAU Photometry community since 1979; and his mentoring of many AAVSO members, being always willing to listen and to offer advice.“

Arlo is known for his active work with the AAVSO and its members. He has provided support, council, and done collaborative research with AAVSO directors and staff.

His career includes many significant achievements:

We celebrate Arlo for his many contributions to astronomy and the astronomical communities, and it is an honor to present him with the AAVSO William Tyler Olcott Distinguished Service Award.

“for her support and leadership of the AAVSO, her seminal research into the nature and evolution of Mira and semiregular variable stars, her service as an ambassador between the professional and amateur astronomy communities, her inspiring education of students, and her outreach activities with the general public.”

During her four decades of active work with the AAVSO and its members, Lee Anne has led by example. Not only did she serve fourteen years as a Council Member and as President from 1999-2001, but she has made significant contributions to the Organization in less visible ways, such as serving on committees and generously sharing her support, counsel, and experience with AAVSO directors and staff. Lee Anne is also a well-respected practitioner of variable star science, having made fundamental discoveries as one of the world’s leading theorists regarding Mira variables and stellar pulsation. Her receiving the AAVSO's 41st Merit Award in 2008 was therefore well-deserved.

Lee Anne Willson has also distinguished herself in the broader astronomical community, not only as a faculty member who has mentored countless students at the undergraduate through post-doc levels at Iowa State University, but through her public outreach. A vocal advocate for women in science, she has not only received the American Astronomical Society’s Annie Jump Cannon Award but has been an active participant in improving the professional culture of astronomy through her work on the AAS Committee on the Status of Women in Astronomy, on AAS Council, and as AAS Vice President. She has also provided invaluable service to the astronomical community through her work with the American Association for the Advancement of Science (AAAS) and the Association of Universities for Research in Astronomy (AURA).

While she is an expert on stars whose behavior is sometimes less than reliable, Lee Anne can always be counted upon to provide leadership, advice, and support to anyone, anywhere, who wishes to be successful in variable star astronomy. As such, she embodies the very mission of the AAVSO. It is therefore our great pleasure to present this 16th AAVSO William Tyler Olcott Distinguished Service Award to Lee Anne M. Willson.

"... for her influential five-decade-long body of research in astronomy, including work on myriad types of variable stars; her outstanding service to the discipline through her annual reviews of advances in astrophysics as well as her work with professional organizations; her ability to bring to life the history of astronomy and communicate effectively with the public; and her invaluable service as a mentor and role model to multiple generations of astronomers."

"...for his tireless work at the local through national level to protect our precious night skies from the ravages of light pollution, thereby guaranteeing the future of variable star observing; his decades of service to amateur telescope making, public outreach, and education through his work with the Amateur Telescope Makers of Boston, the Springfield Telescope Makers, the International Dark-Sky Association, and the AAVSO; and his leadership within the AAVSO."

“...for his for his enthusiastic commitment to educating and mentoring both the current and next generation of variable star observers, and assuring the future success of the AAVSO through his forward-thinking service on Council, lending his considerable business acumen to the Investment and Budget Committees, and serving as a tireless advocate for the observation of variable stars.”

“...for his promotion of variable star research and astronomy education globally; his tirelessly empowering generations of scientists of various backgrounds; his own ongoing cutting-edge variable star research, promoting the AAVSO; his dedicated student and peer mentoring; his demonstration of and advocacy for best practices; and his leadership and service within the AAVSO and the astronomy communities.”

“...for his many years of patiently mentoring observers, giving inspirational talks to astronomy clubs and societies, and his tireless creation of comparison star sequences for observers.”

"...for his unwavering support of variable star astronomy and observing, in both the professional and non-professional realms, through his ambassadorial online presence as friend and mentor to those yearning to learn more about variable stars and astronomy in general, as well as his tenacious dedication to the betterment of astronomical data worldwide."

"... for her promotion of variable star observing through her distinguished work as astronomer and educator, her service to the AAVSO as Council member and colleague, and her being both friend and inspirational role model to teachers and students of astronomy."

"... for his tireless promotion of astronomy to the public and his keen mentorship of future astronomers through the Maria Mitchell Observatory REU Program."

"...for his promotion of variable stars and astronomy education through his ongoing research, dedicated student and peer mentoring, consistent demonstration of and advocacy for best practices in teaching, leadership within the AAVSO and the astronomy and science education communities, and his commitment to public education."

"... for her promotion of variable star astronomy through her tireless and inspirational work with educators and students as a leader, a mentor, and a friend to anyone wanting to learn astronomy."

"...for his untiring promotion of variable star observing through his activities since 1933 as an observer, mentor of countless amateur astronomers and young people, leader of organizations, creator of innovative and efficient equipment and procedures, and through his generous willingness to help those who share his astronomical interests."

"... for her legacy to variable star astronomy through her research, publications, student mentoring, support, and popularization for over 70 years, and for her being such an especially faithful, devoted, and supportive member and friend of the AAVSO since 1930."

"...for his untiring promotion of variable star astronomy in the pages of Sky & Telescope magazine during his many years as Editor and Editor-in-Chief, and for his enthusiastic fostering of the Amateur-Professional Partnership."

"... for his promotion of variable star astronomy through his many writings and public lectures that both educate and inspire those who love the starry sky."